Two down, two to go: Titans get back to state semifinals 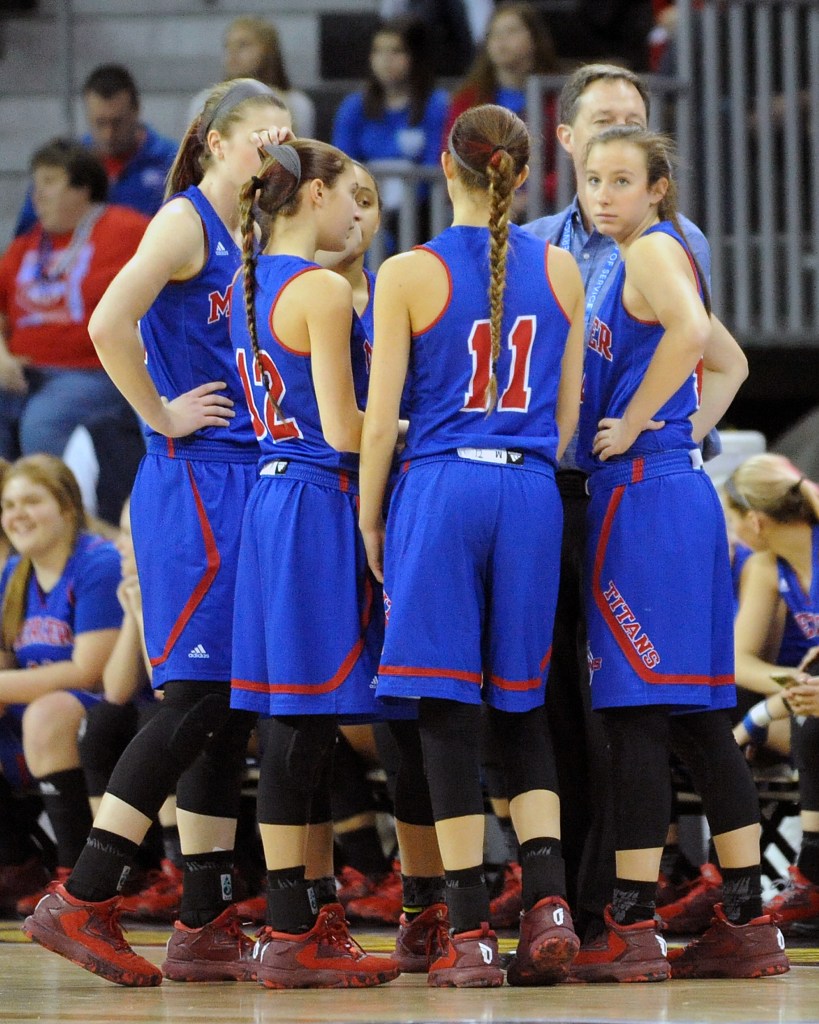 Points weren’t rolling up like an overactive pinball machine, 3-pointers weren’t falling in from all points of the sky, and the opponent never was dead and buried.

But it was more than good enough to secure the Titans second straight trip to the state’s Final Four. Mercer secured a spot in today’s bracket with a 58-47 win over George Rogers Clark in the quarterfinal matchup at BB&T Arena at Northern Kentucky University.

The Titans point total was their lowest output in 16 games and their third lowest total of the season. And one game after setting a state-tournament record with 14 made 3-pointers, they struggled to a 4-for-18 mark from behind the arc against GRC.

Add to that foul trouble for three of its starters — Faith Lake and Seygan Robins each had four fouls, and Lyric Houston had three — and it was a perfect recipe for an upset.

For a while, it seemed that was how the game would end up. The Cardinals appeared to suck the momentum exclusively to their bench when Kennedy Igo drilled a 3-pointer at the buzzer to give GRC a 43-39 lead entering the fourth quarter.

“Goodness gracious, they’re so tough and they really took it to us for the majority of the game,” Mercer coach Chris Souder said. “… Our schedule prepared us for games like that where we have to grind it out. It wasn’t going to be this 85-80 or a blowout, and we knew this coming in. They stayed the course, did what we asked them to do and made big play after big play.”

However, so many experiences of the last three years paid off for the Titans in the fourth quarter. They outscored GRC 19-4 in the final frame, icing the game by going 7-of-8 from the free throw line in the final 40.8 seconds of the game to turn a narrow 51-47 edge into the double-digit final margin.

“Our schedule is second-to-none, and we did it for this reason right here,” Souder said. “We’ve had those games and we’ve lost on last-second shots to nationally ranked teams. They were prepared for this. We talked about it at halftime that we’re used to the big stage, so just hang in there, play 16 minutes.”

Right before taking that 51-47 lead, the Titans milked the clock, running off two minutes of Robins dribbling outside the midcourt circle before she hit a running floater with 1:30 left.

“I guess that’s one way of playing defense is not letting them have the ball so they can’t score,” Souder said.

Robins picked up her third and fourth fouls of the game in the final 1:32 of the third quarter, starting the fourth quarter on the bench and doing an offense-for-defense substitution with Channing Lewis for the final frame.

Although only a freshman, Lewis played vital minutes, with her contribution most felt on the defensive end.

“She would start for a lot of teams in our region and probably across the state,” Souder said. “Channing gets to go against five Division I players in practice, so Channing is never scared when she goes in a ball game.”

Robins was once again a dominant force, scoring a game-high 26 points on 7-of-15 field goal shooting and 11-of-13 shooting from the foul line. She also dished out four assists.

The junior has scored 81 points in her last three games — an average of 27 points per game in the 12th Region final and two state tournament games.

“Their superstar played like a superstar,” GRC coach Robbie Graham said. “She’s a really good player. There were five or six possessions where she just took over, made some really tough shots, was clutch on free throw shots and really controlled the game.”

The Titans led the rebounding statistics with a 32-24 edge as Emmy Souder had her second straight a double-double with 17 points and 15 rebounds. She combined with Robins to scored the Titans first 20 points of the game.

“She committed to NKU, she obviously likes this floor,” coach Souder said. “… She’s my niece, so I’m really hard on her. I gave her a kiss after the game, I will tell you that.

“She really controlled the glass, and that’s what we needed because we were afraid, they were much bigger than us.”

Igo was especially effective against the Titans, pouring in 13 points in the first half. But coach Souder made an adjustment and put the taller Emma Davis on the GRC guard, and the move limited Igo to five points and three field goal attempts in the second half.

She was the only Cardinals player to finish in double figures with 18 points.

And while it may be a surprise to some people, Souder wasn’t about to label the road to Sunday’s championship game as any easier with the Tigers in the way rather than Bearettes.

“If you can beat Butler, you’re really, really, really good,” Souder said. “At this point, they’re all tough, nothing is easy. That’s what we told our kids, we wanted to get back to the Final Four with an opportunity to take the next step. Now we’re here, so we’ll see what happens.”