A Jewish couple from Russia kept the Danville police busy in the early 1900s with a business that went against the local culture.

Their story was recorded in articles written in The Kentucky Advocate from 1903 when Samuel and his wife Annie Landy lived in Danville until his death in 1905 and she was run out of town in 1913.

The newspaper carried articles about the Landy “resort” operation, their customers and those charged with incidents that occurred at the business.

Samuel and Annie, along with a daughter, Rebecca, lived on First Street, according to the 1900 Census.

After they arrived in Danville in 1903, the Landys paid $900 for the First Street property sold by Mrs. M.D. Masonheimer.

The Landys had been in Danville for two years when Samuel Landy met his untimely death following a disagreement at his residence.

He died July 6, 1905, at his home on First Street, from an injury to his skull caused by a brickbat.

The newspaper called it “one of the foulest murders ever committed in Danville.”

Ed Williams, who cracked Landy’s skull with the brickbat, was held in jail without bond to await action by an examining court.

Landy was injured during the afternoon at his house, according to the newspaper.

Ben Durham of Junction City, an agent for a brewery, and Williams drove over to Danville to look after empty whiskey bottles, some alleged to have been in Landy’s possession.

When they arrived at the Landy house, Samuel protested he knew nothing about the bottles, and asked they wait until his wife returned home.

Williams got out of the buggy and went down into Landy’s yard to pry into some barrels. Landy ordered Williams off his property saying Williams had no business in the yard without permission.

Williams who had drunk five bottles of beer that day, became furious. He ran out of the yard and told Landy he would kill him. Landy saw Williams draw the brickbat, he dodged, but Williams struck him a mortal blow on the back of his head.

A witness told police Landy made no move towards Williams and Williams struck him while standing in front of his yard beside Durham’s buggy. Landy fell outside the yard and lay unconscious on the ground as Williams kicked and cursed him.

Williams told the examining court Landy agreed to his going into the yard, but Landy ordered him out and walked toward him with his hand in his pocket. Williams grabbed the brick and threw it at Landy.

The article pointed out that Williams “has been a high-tempered bull-dozer who was continually slugging somebody when the opportunity presented itself, and it is believed that his treatment of this harmless old Jewish man was wholly without warrant, and that if he escapes a hangman’s noose, he will be exceedingly fortunate.”

The newspaper told of how emotionally Mrs. Landy was. She testified that Williams had threatened her husband three separate times, saying, “if you don’t quit meddling with my business I am going to kill you.”

Her testimony and five others indicated Williams had made the threats on Landy.

Five days later, medical men were summoned and said Landy’s skull fracture from the blow, although the injuries were not necessarily fatal, unless complications had arisen.

After he was wounded, Landy greased the wound with tallow and lay on the floor with a horse blanket for a pillow. A few days later, he contracted lockjaw and died eight days after he was hit with the brick.

The physicians said lockjaw could not be contracted from any other cause than by microbe. They questioned that if the microbe was transmitted to the wound with the brick or any other way, then Landy caused his own death.

After the jury deliberated for six hours, William was sentenced to five years of “hard labor” in the penitentiary.

The microbe theory introduced by Williams’ attorneys is said “to account for the light sentence,” according to the newspaper.

They lived at 120 First Street, according to the 1909 City Directory. He was listed as a housekeeper and she was a dealer in junk and produce.

The Advocate cheered Police Chief Wood and his co-workers for their months of hard and patient waiting that landed them their game that the public wanted — which was to have people at the Landy’s caught who had been a nuisance for a long time. At last the opportune time came and policemen swooped down upon them at a moment when the people least expected it.

“The Landy-Levitan resort is now one of the most quiet places in Danville. Why? The police raided it July 16, 1909, and caught nine persons, most of whom have been a stench in the nostrils of their neighbors for the past two or three years.”

They arrested nine woman in the raid.

City Judge Henry Sandifer and the city attorney issued warrants for the whole crowd charging each with “leading idle, immoral and dissolute lives.” Each pleaded guilty and were fined $100 and costs.

Fines were suspended if each left town on the 6 p.m. train.

All but one agreed to leave, she wanted to go to workhouse and work her fine out, but the police chief told her to leave with the others and on she went with Chief Wood escorting the party to the train.

Levitan said the newspaper was persecuting the couple.

The Advocate stated “the arrests show that there is justification in every article that has appeared in the newspaper about this ‘joint’ and how it has been exposed and the ‘birds’ have flown, except one, and we will keep keen eye on this particular place and see that it never flourishes again.”

About a month before the raid, someone set off an explosion of dynamite in the vicinity of Landy-Levitan place.

Residents of First Street were aroused shortly after midnight Saturday (June 14, 1909) by an explosion in the vicinity of Mrs. Landy’s.

An investigation indicated that an effort had been made to blow up the place with dynamite.

A charge had been placed about a foot from the brick portion of the residence, and those desiring to destroy the place evidently were inexperienced in preparing dynamite or their purpose would have been accomplished.

There was wailing and gnashing teeth among the inmates of the Landy house when the awful charge let loose. All the occupants of the Harmon Boarding House on Walnut Street were aroused as well as others on Second Street. Damage was slight.

Some young men who called at the Landy-Levitan place late at night and were refused admittance, it is said, are charged with making the attempt to demolish the place.

The Levitans said the report was not correct in the newspaper and the locality had been slandered.

Levitan admitted they got a letter signed by night walkers warning them to leave town in 10 days, otherwise, the place would be blown up. He also said Danville police were derelict in performing their duties, and the disorder in the Landy-Levitan neighborhood was confined to the property directly in front of Landy’s on the opposite side of the street.

Another incident on September 1, 1909, involving Levitan and Annie was when someone broke into his store and stole “a number of handsome dresses” belonging to Annie.

The alleged thief boarded a train for Chattanooga, Tennessee, and Police Chief Logan Wood followed the man who had the dresses in his possession and arrested him.

Run out of town

Annie Landy-Levitan and her “tribe” were chased out of town in 1909. They went to Cincinnati.

appeared before the grand jury and declared that incidents of boisterous crowds gather at night and engage in loud and indecent conversations.

The grand jury decided that after trouble in that section of town for many years, it was time to do a general cleaning out. An officer was to patrol the section. 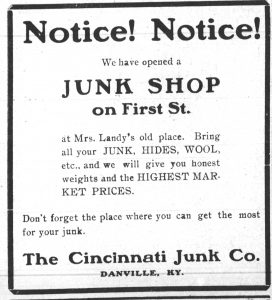 until she sold her cottage on First Street on May 7, 1914. The Cincinnati Junk Co. opened a junk shop at the location.