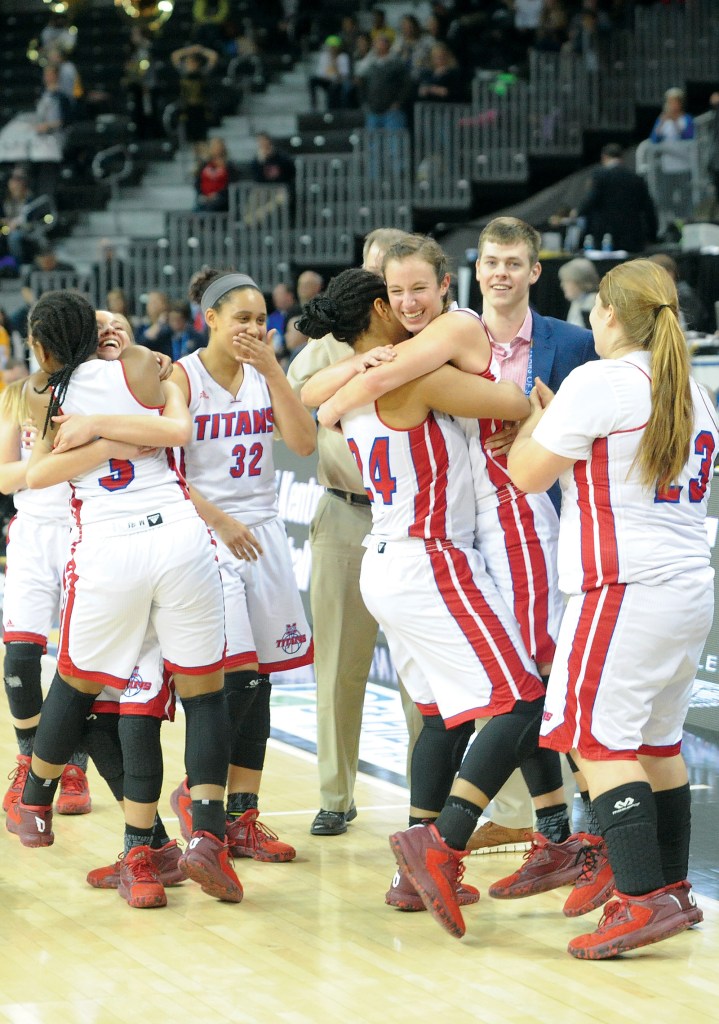 The Titans avenged last year’s season-ending loss to Franklin County by beating the Flyers 85-71 in Sunday’s championship game of the KHSAA Sweet 16 at BB&T Arena at Northern Kentucky University.

Mercer might have started slow in its first three games at state, but the Titans grounded the Flyers from the beginning of the game, and with balanced scoring, epitomized how coach Chris Souder has built a state powerhouse in Harrodsburg.

“I really don’t know right now. It’s just incredible,” he said. “This is a program championship. What I mean by that is that we’ve done a lot of work in this program over the last 18 years. There’s a lot of girls who were in the stands today that played for me. They own part of this, too. It’s been that long building this, building a style.

“The work that goes into this, I don’t think people realize what I put them through. Now, hopefully, they understand it, the schedule I put them under this year. There were times that we were asking ourselves if this was the right thing to do, but this, we definitely saved our best game for our last game. I could just tell, the demeanor of the kids yesterday, they weren’t going to be denied.”

Franklin County started to make a run in the second quarter and had the Titans’ lead down to nine points twice in the final minute of the half. But back-to-back 3-pointers from Lexy and Faith Lake pushed Mercer’s lead back up to 12 points. Faith’s triple at the buzzer gave Mercer a 43-31 lead at halftime.

“I was just amazed,” Faith said. “I was so happy, so excited. We worked really hard for this and I’m just glad we finally pushed through all the way to the end and win it.”

Tournament MVP Seygan Robins led the team with 10 points at halftime on her way to 19 for the game. Lexy had nine points, all from 3-point range, and Faith and Lyric Houston each had seven points at the break.

“When Lexy knocked down the 3 at the start the game, I knew it was game on,” Souder said. “We had a talk, I had a talk with Lexy and Faith last night after everybody left our meeting. I said, ‘Look, you guys are Division-I commits for a reason.’ And boy did they step up. Faith’s 3 before halftime was a dagger.”

Houston was on her way to a triple-double at halftime, pulling down six rebounds and dishing four assists to go with her seven points.

“Lyric finally got going, she was herself,” Souder said. “… She’s just hard nosed. She got down, a little frustrated after the first couple games. So we just stayed the course, and Lyric is just a competitor. I knew she’d come out fighting tonight.”

Emmy Souder scored 16 points in the final 16 minutes, going 12-for-14 from the foul line. She led Mercer with 20 points and was named with Lexy and Robins to the all-tournament team.

Coach Souder said he reminded his team about the last time they played Franklin County in the playoffs — exactly one year before, in the Final Four of the 2016 state tournament.

“We had talked about how we didn’t want to come out and dig a hole,” he said. “I asked them, ‘How did we play against them last year?’ They all said, ‘Terrible.’”

Robins said the difference between the two years came down to confidence.

Mercer’s offensive display wouldn’t have been a surprise earlier in the playoffs, but the Titans were relatively slow on offense during the first half in their first few games.

But the highest-scoring team in the state proved its proficiency on offense in the final, setting the mark for highest points in a game in this year’s state tournament. Their 43 points at halftime set a new game record, and their 86 total points were second most in the game’s history.

“The first game, we broke the (3-point) record and honestly we were all shocked because we really didn’t think that we had even shot that good,” Robins said. “Some games we didn’t, we knew we had to do other things but I think tonight we shot it really good, I was proud.”

“That’s what we said during the game, we said there’s going to be storms. Weather the storms,” he said. “And the team that weathers the storms, every time, I said at halftime, they’ve got to outscore us by 13 to win this ball game. Seygan said, ‘It’s not happening.’ Then we go into the fourth quarter, they’ve got to outscore you, and they said, ‘It’s not happening.’ Every time they made a run, we showed a lot of composure, we’d get a big bucket or knock down free throws. It’s just incredible.”

Two down, two to go: Titans get back to…