Brock Ashley Sims, age 35, Richmond, formerly of Harrodsburg, husband of Jodi Michele Lahrmer Sims, died Thursday, March 9, 2017 at his home in Richmond after a brief illness. Born September 22, 1981 in Danville, KY, he was son of Genie G. and Toni G. (Stephens) Sims. Other survivors besides his wife and parents include one sister, Jennifer G. Sims and one brother: Chris Clark both of Harrodsburg, KY; father-in-law and mother-in-law, Joe and Noreen Lahrmer of Ravenna, KY; a host of aunts, uncles, cousins and friends; and two very special canine companions, Shelbie and Brodi. Brock was preceded in death by his paternal grandparents, Buster and Myldred Sims, and maternal grandparents, Doug and Carolyn Stephens. 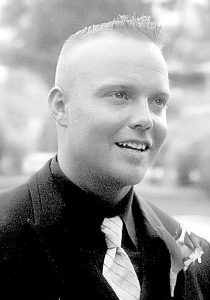 Brock was a 2000 graduate of Harrodsburg High School, where he participated in numerous sports, was a member of the academic team, Beta Club and many other school activities. He was a 2004 graduate of Eastern Kentucky University where he received his Bachelor of Arts and Master’s Degree in Education. He was a dedicated teacher and administrator having been employed at Harlow Elementary in the Harrodsburg Independent Schools and Mercer County School System. He began his administrative duties at North Washington Elementary and was currently employed in the Estill County School System at South Irvine P/K Center. Brock’s love of children was evident in each and every school that he worked.

Expressions of sympathy can be sent to the family at www.simsfuneralservices.com.