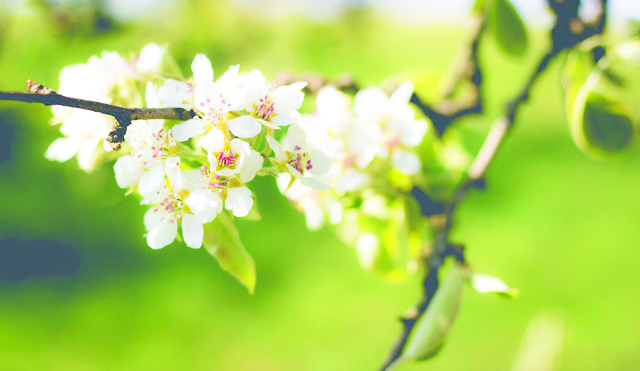 With the early arrival of spring, we are beginning to experience the magical effect that spring blooms bring each year. My personal favorites are the Kwanzen cherry, pink Magnolias and the unmistakable white dogwood blooms. One of your favorites might be the white blooms of the Callery pear (Pyrus calleryana), currently in full bloom across Boyle County and central Kentucky.

Often, these trees can be seen lining driveways or forming a dense ocean of beautiful white blooms. This wondrous sign of spring’s approach can be so mesmerizing that it can be hard to think of Callery pear as anything but spectacular. However, over the past 70 years, this beauty has turned into quite the beast.

Originating from China, Callery pear was first introduced into cultivation in 1908, and was brought to the United States to combat the bacterial disease fire blight, that was decimating pear fruit crops. The Callery pear also showed a great tolerance for environmental conditions such as drought, wet soils, high or low pH and clayey soils. These attributes, coupled with its showy blooms and attractive maroon fall color, led to horticulture trials for Callery pear.

In 1952, one of the grafted trees from the fire blight experiment station showed promise as an ornamental, and three clones were planted into a residential subdivision for testing. After eight years and careful pruning, the plantings were deemed a success and given the cultivar name Bradford. These days we have several popular cultivars sold of Pyrus calleryana, including Bradford pear, Autumn Blaze, Capital, Whitehouse pear and Aristocrat pear.  (Fun fact: Did you know the Aristocrat pear originated from a nursery near Independence, Kentucky?)

A mere 10 years later in 1962, Bradford pears were available commercially and became one of the most widely planted street trees for urban areas in the U.S. It wasn’t long before publications could be found promoting Callery pear, including gardening periodicals and government materials. Even the National Arbor Day Foundation began distributing the tree and, by 1981, an estimated 300,000 Bradford pear trees had been planted across the U.S.

Starting around 1990, concerns about potential invasiveness started to arise with increasing regularity. This was primarily due to the frequency of escapes from cultivation within 19 reported states, Kentucky included. Bradford pears naturally are self-incompatible and produced sterile fruits, but with the introduction of other cultivars, such as Aristocrat, that were bred to combat branch splitting, outcrossing could happen between the cultivars. Abundant fruit production, its ability to withstand a wide range of environmental conditions, and the continuous rate of dense plantings in neighborhoods has led to the explosion of Callery pear thickets within the south eastern United States.

Currently, the Kentucky Exotic Pest and Plant Council list Callery pear as a “severe threat.” Which means it possess characteristics of an invasive species, that easily spreads into native plant communities and displaces native vegetation. A single wild tree can form dense thickets within just a few years via seed and sprouts, which can outcompete many of our native plants. In the spring time Callery pear is typically one of the first trees to leaf out, which effectively shades out any spring wildflowers nearby, and further chokes out any native grasses and shrubs that provide vital habitat to Kentucky’s birds, insects and butterflies. Usually, we see these thickets occur in disturbed areas such as fence rows, woodlots, weedy ground, and fallow fields.

So, the question today seems to be how do we deal with the beast Callery pear? It seems to have few, if any, natural controls. It can seemingly grow anywhere the temperature does not drop below -30°F but still has a cold period of 32°F, leaving Kentucky as a prime area for invasion. According to the Kentucky Division of Forestry, the most effective control practice for established wild trees is their removal, followed by an application of a systemic herbicide such as glyphosate or Garlon 3A. Trade names for these chemicals include ORTHO Brush-B-Gon, Enforcer Brush Killer and Vine-X. The best time of year for optimum control is June-September. For seedlings and young plants hand pulling is often efficient, as well as girdling practices.

Majority of the woody invasive species we see today, like Callery pear, were brought to the United States for horticultural or agricultural use. Consumer demand for unique and novel plants drives the market, and can greatly accelerate the natural process of plant introduction. As consumers, it is our job to make smart decisions about what we buy. If we stop buying and planting Callery pears from nurseries, we may be able to slow its spread, while simultaneously encouraging the production of native plants replacements. It is unlikely we will ever see a decline in the existing wild Callery pear population, it will remain to be seen whether it will become a minor non-native component of our ecosystem, or become a costly problem down the road. For now, all we can do is try.

The good news is that just because you stop planting Callery pear, doesn’t mean you have to give up your spring blooms. There is a wide array of trees and shrubs that will put on a show from March to June, with plenty of color varieties. Some of my favorites are Fringe Tree (Chionanthus virginicus), Redbud (Cercis canadensis), Serviceberry (Amelanchier arborea), Chokecherry (Prunus virginiana), and Umbrella Tree (Magnolia tripetala). There are many more options available, that can fit any space or need you might have.