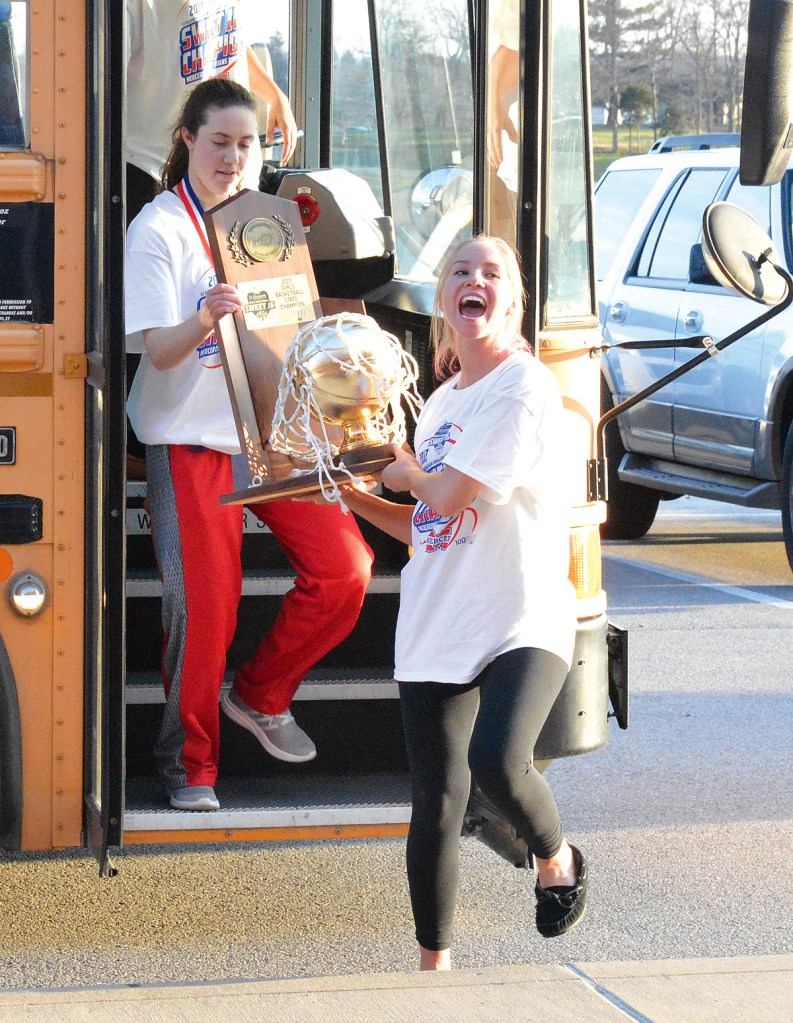 Jeremy Schneider/jeremy.schneider@amnews.com Mercer County seniors Jennifer Merchant, left, and Alie Burke carry the state championship trophy off the bus as the team arrives at the high school Sunday in Harrodsburg.

It was called a “devotional,” and Smith’s message hinged on two words, precious present.

“I told them they’re already champions,” Smith said after the Titans were welcomed back to Harrodsburg with a community rally at the school to celebrate their 85-71 win in the title game.

“They made the final two, they were in the Final Four for two straight years. That’s an accomplishment in itself.”

The Titans were welcomed home by family, friends and fans in the school’s gymnasium, a fitting location for a team which coach Chris Souder said has put in so much work to reach this rare accomplishment.

Star guard Seygan Robins, who was named the tournament’s MVP after averaging 28.7 points in the Sweet 16’s four games, said Smith’s message Sunday morning was exactly what the team needed to hear.

“His devotional meant a lot to us this morning, it got a little emotional,” Robins said. “It definitely pumped us up. His message was play for God, play for your teammates, then put yourself next and everything will work out.”

Souder felt this was the toughest year for him as a coach simply because of the expectations placed upon his team. The Titans came into the season as the two-time defending 12th Region tournament champions, and they were a state semifinalist a year ago.

“I get lost in it sometimes, to enjoy the process, enjoy the journey,” Souder said. “We all get caught up and lost in it, and Donald did a great job of talking to our kids about that.

“I got a story from coach (Joey) Thacker at Franklin County, and he’s got a girl playing at Western (Kentucky), Malaka Frank, you played last year. He asked her, ‘Would you give up your college scholarship to play one more night in the state tournament,’ and she said, ‘Without a doubt.’ That’s what we were trying to tell our kids, you’ve got to enjoy this because it’s the time of your life, so don’t let it slip up without enjoying it.”

At Sunday’s Welcome Home celebration, supporters filled the lower half of bleachers on one side of the Titans’ home court. It was a fitting reception for a team so accustomed to community support.

“This is insane, it’s just crazy, but it doesn’t surprise me,” Souder said. “Me and coach Smith talked about it all year, in the 12th Region, our fans travel, about like UK. Wherever we go, it doesn’t matter where we’re at, our fans travel.

“When I find out (the school) was going to buy the student’s tickets for them, which I thought was an incredible idea, I knew then we would have a huge following. Like I said, this is a program championship, a community championship, and it’s just incredible.”

It wasn’t unnoticed by senior Lyric Houston, either.

“It means a lot because it’s good to know the community has been behind us the entire way,” Houston said. “They believed in us, and we’re thankful we had all this support.”