Wilma C. Longworth Poynter, 87, of Danville passed away Sunday, March 12, 2017. Born July 3, 1929, she was the daughter of the late Henry and Elizabeth Grissom Longworth. 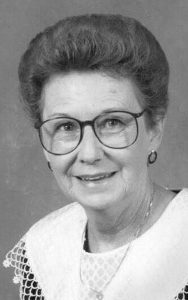 She was a member of Southern Heights Baptist Church and retired from American Greeting after working 21 years there.

Wilma was preceded in death by her husband, Grover Poynter, and by a grandson, Ronnie Dewayne Poynter.

She is survived by her son, Ronnie Poynter and his wife, Diane of Danville; and a sister, Betty Crain of Frankfort.

Services will be at 1 p.m. Thursday at W.L. Pruitt Funeral Home by Rev. David Smith with burial in Danville Memorial Gardens.

Visitation is after 11 a.m. Thursday. Guestbook is available at www.wlpruitt.com.