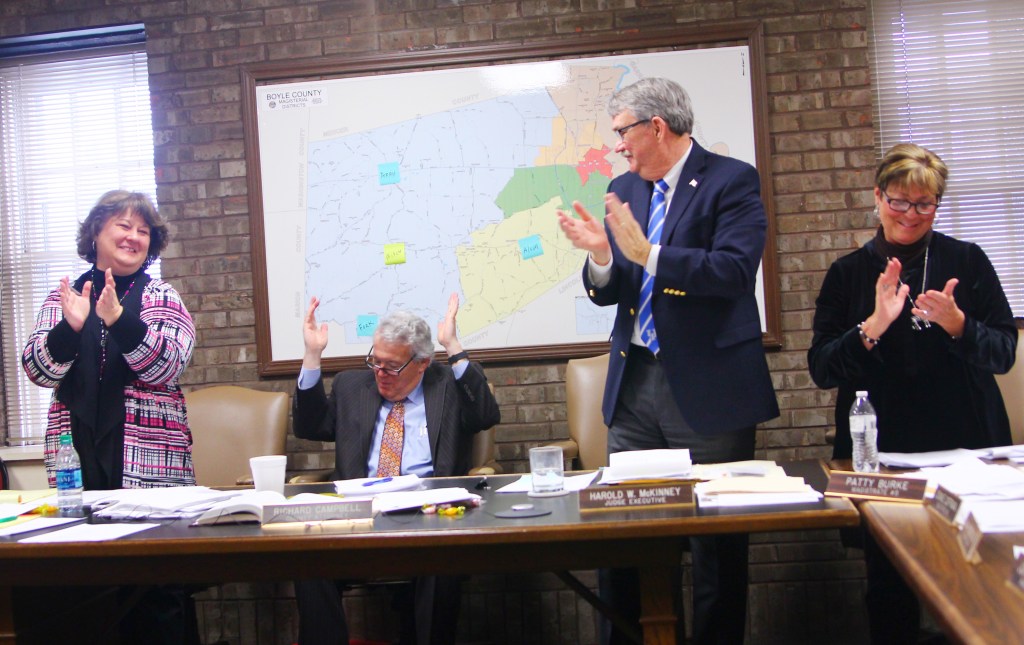 Ben Kleppinger/ben.kleppinger@amnews.com Boyle County Attorney Richard Campbell, second from left, thanks those in attendance at Tuesday morning’s Boyle County Fiscal Court meeting as they give him a standing ovation. Campbell has served as county attorney for more than 14 years and will resign at the end of March. Standing from left are Boyle County Clerk Trille Bottom, Judge-Executive Harold McKinney and Magistrate Patty Burke.

Boyle County Attorney Richard Campbell plans to retire at the end of March, stepping down after more than 14 years as county attorney.

“I don’t want to be emotional here, but Richard and I have been friends for a long, long time, and I can tell you we could not have had a better county attorney in the past several years,” said Harold McKinney, Boyle County judge-executive. “It is with great sorrow that I know we have to accept his resignation.” 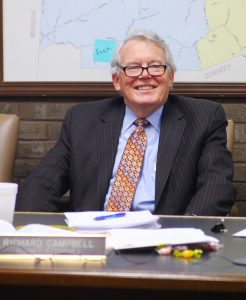 Ben Kleppinger/ben.kleppinger@amnews.com
Boyle County Attorney Richard Campbell’s letter of resignation was accepted by the Boyle County Fiscal Court Tuesday morning. The resignation is effective at the end of March.

Campbell, who became Boyle County attorney in 2004, will leave with 21 months left in his current term. He said for him, “it’s a good time to step away.”

“I had already told people that I wasn’t going to run for re-election in 2018,” he said later Tuesday. “Then, last October, I developed some health issues that I’ve been addressing over the last several months. And while it looks like that’s probably been taken care of at this point, it just makes you stop and say it’s time to smell the roses, maybe.”

Campbell said he has recommended that McKinney appoint Assistant County Attorney Lynne Dean as county attorney in his place. Dean is “very capable” and has served as assistant county attorney for nine years, he said.

Dean has recently provided a letter of resignation to the City of Perryville, where she serves as city attorney. She agreed to continue serving the city until it could find a replacement.

McKinney said he will need to talk about things with Campbell before making his decision about who to appoint to the county attorney seat.

The position of county attorney was one that he had aspired to long before he earned the seat.

“It’s an office that I really took to years ago. I became an assistant to the County Attorney George McClure while I was in law school,” he said. “… I had just sort of a natural inclination for that office.”

Because McClure intended to “stay a long time” as Boyle County attorney, Campbell pursued a “different direction,” becoming an administrative law judge in the workers compensation system. In 2003, a Republican was poised to win the governor’s seat and Campbell, a Democrat up for reappointment in 2004, said he felt his chances of being reappointed were low.

“George had announced that he was retiring and was not going to run for re-election and I decided to make that move,” he said.

Boyle County magistrates applauded Campbell for his years of service.

“Richard, you’ve not only been our counsel, but you’ve been our friend,” Magistrate Phil Sammons said. “Thank you.”

“Thanks a million for all your years of service and happy retirement,” Magistrate Jack Hendricks said. Hendricks added later in the meeting, “I can tell you right now retirement’s not all it’s built up to be. You’ll find something to do — I promise.”

Campbell said he doesn’t really have any specific plans for what he’s going to do after March 31 at this point.

“I’m just going to take it easy for a while and do some things in terms of volunteering that I don’t have the opportunity to do or don’t have the time to do right now,” he said. “If I get bored as Jack Hendricks says I will, then I’ll look at something else.”