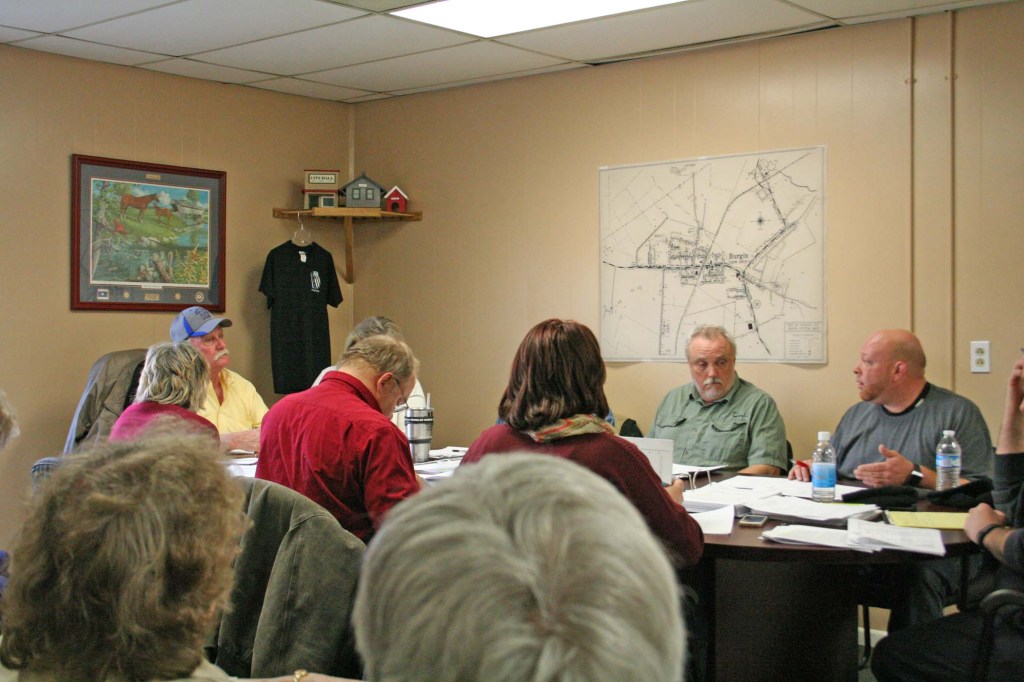 While it was cold outside, the thermostat and temperatures ran high in the Burgin City Council meeting Tuesday night, in front of a packed crowd of residents.

Starting off early, while reviewing the minutes of a special called meeting from Feb. 21, Council member Katrina Sexton pointed out what she believed to be an error on the minutes.

“On the special meeting minutes, where we were here to review the attorney applications, it says, ‘After some discussion, Mayor Hensley told the council to give their opinion in votes of who they wanted to have the job.’ What actually happened was that Mayor Hensley went around the table and asked our opinions,” Sexton said. “When it got to me, I asked if we were taking a vote or giving our opinions, he said, ‘No, we’re just giving our opinions.’ At that point, Sid Dunn made a motion to take a vote, David Caldwell seconded that motion and we went around the table with our votes. That’s what actually happened.”

City Clerk Michelle Russell said she did not hear the motion for the vote. A few other council members agreed with Sexton that they heard the motion.

Interim City Attorney Wanda Dry advised Russell to note in the minutes that Sexton believed they should be changed, then added the names of the members who agreed with Sexton when they voiced their difference to the phrase “according to Katrina.”

A motion was made to begin recording the city’s meetings, but was not answered with a second.

That discussion led into the ongoing dispute between some members of the council and Mayor George Hensley, regarding whether or not a city attorney is to be considered a city employee.

Council member David Peavler said according to KRS 83A.080, elected city officers refers to those who hold a title of office, take an oath of office, and have powers and duties of offices — these are the positions the council gets to vote in.

“She does not hold that. She does not take an oath for her job. Therefore, she falls under the non-elected offices, i.e. employees,” Peavler said.

“Just to clarify, municipal law states that there is a definition to determine how that falls. It’s in chapter seven, and it tells us that they are not an employee, because our city — the size it is — falls under home rule,” Sexton said. “I have asked the state general’s office, I have asked the state auditor’s office and they have confirmed that they are not considered an employee.”

Dry weighed in on the matter — despite Sexton’s wishes that she would not, being one of the applicants for the position — stating that there was case law from LaGrange, Kentucky, which showed that the city attorney was to be appointed by the mayor.

Sexton asked why the city had a meeting, conducted by the mayor, to vote on an attorney.

“I think this meeting was to review the applications and get your input on who you would like to have, or who is more qualified. I took all of that and weighed it on my consideration of who it is. And that’s how I stand on it,” Hensley said.

Sexton informed him that was “in violation” of the city’s personnel ordinance.

“Honey, I’m in violation of everything coming down the pike, evidently. All you’ve got to do is pick the newspaper up. But right now, I’m standing for what I said,” Hensley said.

Ultimately, the council agreed with Hensley that the matter would only be settled when the Kentucky Attorney General’s office issued an opinion on the matter.

Sexton questioned the decision to continue paying Dry in the meantime, to which Hensley said, “She’s going to stay on.”

Dry explained the council had the right to hire its own attorney.

“Two clerks and a police officer are the only employees listed in our ordinance,” Sexton said. “To have a city employee like a lawyer, who is going to be on retainer, considered a city employee, it would need to be in the city’s ordinance.”

“I don’t think the city attorney is a city employee,” Dry said. “It’s a non-elected office.”

Sexton referred to that statement as a confirmation of her point, which Dry said was not the case.

“The rule is that the mayor appoints the city attorney and the council approves the appointment, or doesn’t approve it and you keep going until you get someone you agree on,” Dry said.

Hensley said he couldn’t agree with hiring Whitney Johns, the other attorney in consideration for the position, on the basis of cost.

Sexton said the city has paid Dry more than that before. When asked, Dry said she represented the city on a case recently, charging, she thought, about $3,900.

“I never knew about that,” said Council member Sid Dunn. “We’re paying — that’s $4,000 we’re paying her … we didn’t find out until you guys got out of court what was going on.”

Sexton said Johns, who the majority of the council had cast a vote for and whom Hensley referred to with the $1,250 price, was going to get $1,200 a month for 10 hours of work, and an additional fee after that, along with the city potentially paying for furthering education fees.

“I agree — the cost is high. I don’t want to pay $1,200 and I don’t think anyone else here wants to pay $1,200 a month, seeing as how we’ve never paid that before,” Sexton said. “But you’re claiming that her fee is going to be $300. Right here in the documents that she submitted, a retainer fee of $500 — ‘this fee will be applied to any cost or expense’ — then it goes on to list attorney’s fees, ‘to be applied at the discounted rate of $150 per hour on top of that, based on 15 minute intervals;’ then it goes on to say the attorney will be paid a flat fee of $300 … If you add it up, it’s going to add up to more than what Ms. Whitney Johns submitted.”

Dry explained the flat fee of $300 was for the meetings, and any additional work was $150 an hour.

Council member Jamie Keebortz questioned why it was an issue to pay someone more who the council felt would be better qualified, since the city has never before questioned paying the attorney. He said there was no budget for the attorney; the city just paid what was due.

The council decided they needed to examine the attorney allocations as they establish the budget.

The meeting became contentious again when Sexton questioned Burgin Police Chief Casey Rucker on his choice of tires for the police cruiser, which she believed could have been gotten at a cheaper rate.

“It is my understanding that we paid nearly $400 per tire for four tires,” Sexton said.

Had the city gone through the “appropriate processes,” she said, the tires could have been obtained for between $100-$200.

Rucker defended the move, saying that the tires needed to be purchased sooner rather than later. The discussion turned heated, but was diffused quickly with Dry suggesting the city generate a list of approved vendors so that the matter didn’t arise again.

At the end of the meeting, Sexton said the city is over-budget in two areas: the attorney and the police department.

“This is not going to be popular with anybody and I apologize for that now. But I’m putting it out there because I’m trying to do what I was elected to do. We are over-budget in certain areas,” she said.

The city has been pulling from other funds to pay for those two areas, which Sexton argues can get them in trouble later on. She made a motion to freeze all expenditures on departments that are over-budget.

The police department being over-budget comes from paying two officers last fall, Sexton said, “through no fault of Casey (Rucker).”

The motion failed, but the council did approve a vote to move $2,000 into the police department budget from the general fund to cover the costs for a while.

At 6 p.m. next Tuesday, the council will meet for a special called meeting to discuss the budget.