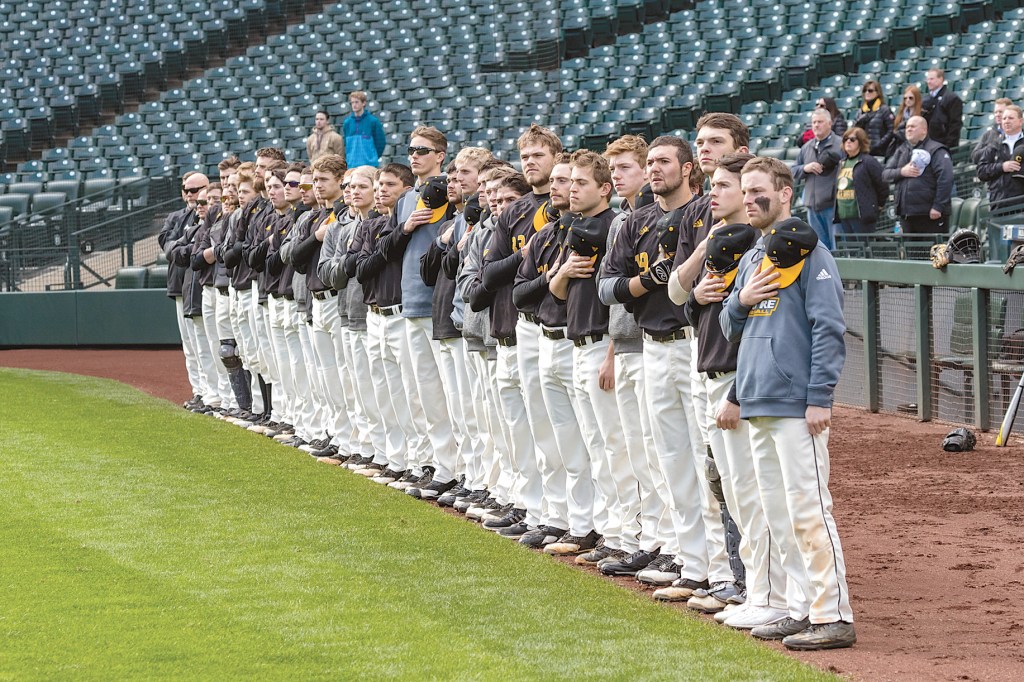 Mike Centioli/For The Advocate-Messenger The Centre baseball team lines up for the National Anthem before playing a game at Safeco Field in Seattle.

When Drew Briese returned to his alma mater to coach the Centre baseball team this offseason, plans were already in motion to send the Colonels out west to play four games at Safeco Field, home of the Seattle Mariners.

The weekend spent in Seattle was a highlight of an historic start for the young Colonels under their first year coach. They opened the season 6-0, their best start since 1992, before heading out to face Whitman College at Safeco.

John Stanton, the majority owner of the Mariners, is a Whitman graduate. Annually, the school looks for a team with similar academic standards from outside the region to play in the series.

“For our players, it was the experience of a lifetime, just being able to compete on a big league field,” Briese said. “Having that experience for two days is something I’m sure they’ll never forget.

“We talked to them about it in two different aspects. Number one, kind of the experiential side of it, walking in and being in awe of the stadium and all that kind of stuff, soaking that in, having the ability to enjoy it. Number two, not getting caught up in it, saying, We prepare for it, we take infield and outfield, we prepare for the game and now we’re ready to play.”

The Colonels played doubleheaders on Saturday and Sunday, March 4 and 5, so they spent Friday exploring the city. Briese wanted the trip to be about more than just baseball, even though playing at an MLB park was the definite focal point.

“All day Friday, I mapped out some spots for the guys,” Briese said. “Our hotel was less than a mile from the Pike Place Market, where they throw the fish, so we were able to walk down there. A bunch of guys went over the Space Needle, we experienced the docks and the water. So we had a full day of sightseeing.

They returned from Seattle with a 7-2 record after splitting the four games with Whitman. Since then, they’ve opened Southern Athletic Association play by dropping two of three games at Berry College.

Despite the blistering start — in which they swept series against Defiance College, Ohio, and Coast Guard — Briese has been preaching to his young squad about keeping a level outlook through the peaks and valleys of a 30-plus game season.

“The mindset of this team is more important than anything we have going mechanically,” Briese said. “The messages that we’re trying to send as a staff are we’re going to treat each game independently — whether we won the last game or lost, we’re going to go out and try to execute the gameplan in the next game that fits our team.

Working with their mindset is absolutely vital due to their youth, according to Briese. Of nine players who’ve registered at least 20 plate appearances, five are sophomores and three are freshmen.

And while their pitching rotation isn’t quite as young — senior Trevor Brewer is 2-0 with a 2.14 ERA in 21 innings — a pair of sophomores, Drew Schact (23 IP) and Nick Hoffman (17.1 IP), have seen extended time on the mound.

“Our guys were done with preseason practice, they were chomping at the bits, so they were ready to go,” Briese said. “We had some guys who got off to great starts in their college careers, guys who weren’t intimidated by being in the starting lineup as a freshman and were able to come out and put their best foot forward.”

Schacht also leads the team with a .364 batting average, scoring 15 runs and driving in 15. He also has eight stolen bases.

Freshman Seth Hagan mirrored the start for the Colonels, hitting .727 with a home run, six RBIs and two stolen bases in the season-opening weekend against Coast Guard. He was the first Colonel to be named SAA Player of the Week in four years.

Hagan has predictably leveled off — no one can expect a batting average north of .700 for an entire season, after all — but he hasn’t gone away. He’s hitting .341 with four extra base hits, 11 runs and 10 RBIs.

“He’s talented, but he’s ready to play as a freshman because of his mindset,” Briese said. “He’s even-keeled, he doesn’t get distracted. He’s one of the best practice players that we have, just in terms of the way he goes about taking care of his business.”

With games last night and tonight postponed due to cold weather, the Colonels resume play this weekend when they host SAA foe Birmingham Southern with a doubleheader Saturday and a game Sunday.

It’ll be a reunion of sorts for Briese, who was an assistant for the Panthers for a decade. Southern has won the last three SAA title, going 50-12-1 in the conference and 111-37-1 over that span.

The Colonels have lost 11 straight to the Panthers, and Centre hasn’t had a winning conference record since 1997, when they were in the Southern Collegiate Athletic Conference. But when the call came in to return to Danville, there was no hesitation from Briese, a 2000 graduate of the school.

“When I had the opportunity to come up, there really was no question about whether or not we were going to make the move,” Briese said. “To bring our three kids up here really was a no brainer. … Just being in Danville and at Centre has been a little nostalgic.”

And it makes bringing a consistent winner to the diamond all that much more important for Briese.

“What makes it really special for me is I know what we need to do to be successful at Centre,” he said. “… I can think about what it takes long term to build a program here. That’s one of the messages I’ve had for our guys in my first year here — I’m not interested building a team that’s good for one year here, I want to build a program that’s going to be passed down from generation to generation.”

Learning the ins and outs of high school athletic…