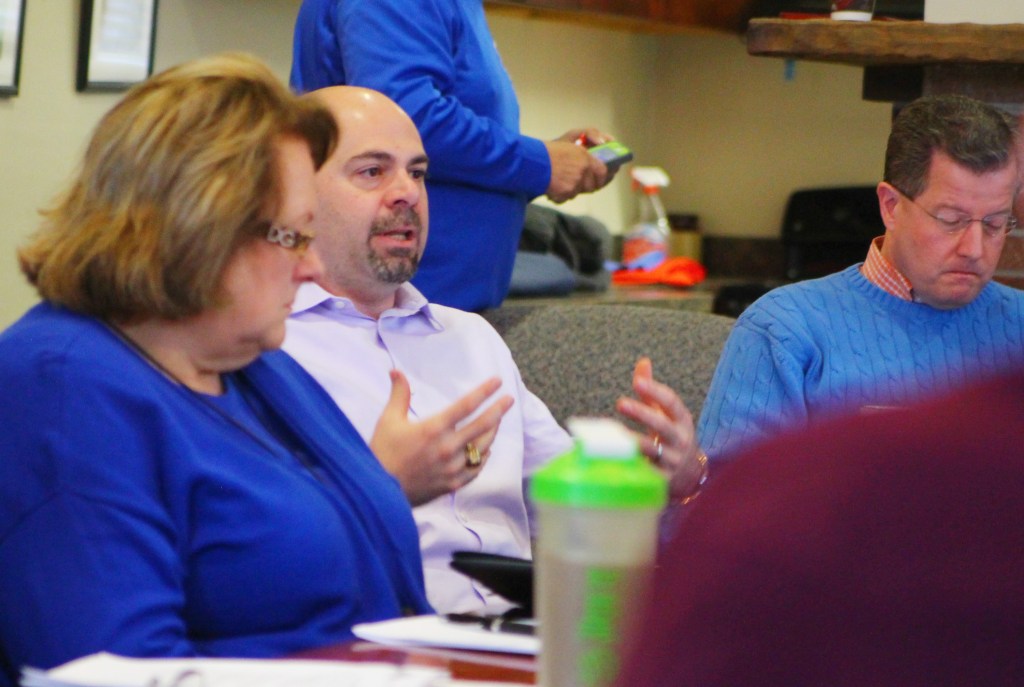 A months-long process of developing a strategic economic development plan for Boyle County is nearing completion.

The Danville-Boyle County Economic Development Partnership approved a final version of the goals for the plan Wednesday morning. Kyle Talente with RKG and Associates, the consulting firm hired to help the EDP develop the plan, is back in town as well.

Talente attended a thank-you reception at Mallard’s Wednesday night and will be part of a working session tonight where an initial version of the plan will be discussed with many of the partner agencies.

EDP Chairman Ben Nelson said the working group that developed the final goals for the plan got input from more than 80 people.

The group approached “all your board members, all your elected public officials, multiple times, asking them for input and comment,” Nelson said.

Judge-Executive Harold McKinney made the motion to approve the goals in their newest form, saying “Let’s roll them out.”

Sally Davenport with Ephraim McDowell said the goal of “establishing consensus” is “probably the most important piece.”

Nelson said that is exactly why the working group “lifted” that goal into the preamble to the goals.

“We felt like that was a pre-existing condition that had to be met in order for us to pursue these goals,” he said.

Mark Morgan, who represents the Convention and Visitors Bureau on the EDP board, said he thinks the goals are broad enough to “reflect our county,” but that broadness can also pose a challenge.

“They are so all-encompassing that one could argue they sacrifice some focus in order to be inclusive,” he said. “I think at this point in our strategy, we need to be inclusive, we need to have a big tent. But the challenge is going to later on be to establish focus that allows us to be effective.

“This is so ambitious and so all-encompassing that every one of us is going to have to be mindful in the next few years that some things are going to be emphasized more than others and at this point, everybody is under the tent, but later on, given the resources available, some people are going to feel like, ‘hey, I thought this was going to be of more use to my goals, to my priorities.’ That’s going to be the challenges,” Morgan said.

“You’re 100-percent correct,” he said. “These goals reflect a body of work that is frankly substantially greater than what the EDP is doing today. And we do have the challenge of financial and human capital constraints to be able to accomplish all of this.”

“The community will have to make decisions,” Talente continued. “Do we expand the bandwidth, if you will, to be able to do all of this? Or then how do we prioritize and what are we going to try and accomplish first, second and third?

“As a group, the EDP is going to have to recognize that some things are not going to bubble up to the surface. In the past, based on stories that I’ve heard, that doesn’t always sit well with everybody.”

Talente said recognizing what Morgan mentioned before the EDP members encounter it is “critical.”

“(If) at some point in time, we don’t have the resources to do all of it, we’re going to have to knuckle down and pick what we are going to do.”

Nelson said the goals represent “desired future conditions,” but they “do not tell us how we’re going to get there.”

Turning from goals to the actions required will be “where we will struggle with resource implications,” he said.

The member organizations of the EDP are paying RKG and Talente $83,795 for the study and subsequent strategic plan, which is intended to serve as an economic development “road map” for the area for the next five to seven years.

Nelson said the EDP has submitted its annual funding request to the City of Danville and will soon submit its request to Boyle County, as well. Those requests are for a “continuation” budget, which doesn’t add any funding requests for actions tied to the strategic plan.

Work will begin on developing that second budget during this visit from RKG, Nelson said.

In the process of developing a Strategic Economic Development Plan, the key stakeholders will establish a consensus among the implementation partners on the economic development vision of the community, the actions necessary to accomplish the vision, and role each need to play.

• Optimize and resource an organizational structure for implementing economic development that maximizes efficiency and effectiveness of the key stakeholders.

• Create a more business friendly environment that encourages the expansion of existing businesses and promotes an entrepreneurial spirit.

• Diversify and support retail and service offerings as a regional hub to enhance the livability and convenience for county residents.

• Preserve and support the continued success of the county’s agricultural industry, and identify strategies to expand agritourism and agribusiness.

• Pursue economic development strategies to enhance the community’s public and technology infrastructures for growth, while maintaining our communities’ character, historic preservation and quality of life that are assets for Boyle County.

• Support further development of Boyle County’s tourism and recreation activities to enhance their positive economic impact on our communities.

• Create better connections between education/workforce development and employment opportunities to promote opportunities for our communities to flourish in Boyle County.