James “Jim” Howard Kirkpatrick, 80, of Danville, died March 14, 2017. He was born July 11, 1936 in Moreland, the fifth of eight children of Joseph and Estelle Merriman Kirkpatrick. 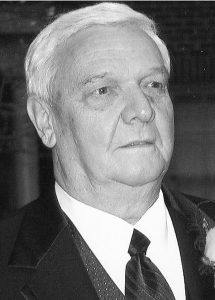 He was a graduate of Hustonville High School while a member of the U.S. National Guard. He served over a decade in the U.S. Navy, and proudly served in the Seabees as a disbursement clerk. While in the Navy, he lived in Washington, D.C.; Okinawa, Japan; Philippine Islands; Port Hueneme, Calif., the latter tenure was with his bride, Lucy Owens.

Together, they created a family of three children, seven grandchildren, and boundless nieces, nephews, and relations treated as family.

After his naval career, Jim completed the quality control training program for American Greetings and served in management for 32 years. His appreciation for precision and detail were a perfect fit for his roles. He was beloved for his kindness, consistency, and acceptance. Most of all, Jim appreciated family and history. This included family vacations to many historical sites, frequent visits to family members living out of state, and volunteering for most any role a family member needed.

He served as an Elder and Deacon at First Christian Church, among many other roles supporting the church and its members.

In lieu of flowers, donations are suggested to First Christian Church, Danville or the National Kidney Foundation.