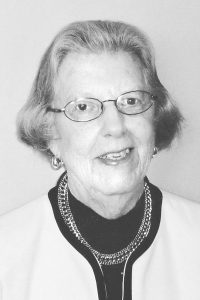 A native of Washington County, she was born on May 23, 1923, to the late Hugh and Alta Upton Yankey.

A member of the First Baptist Church in Danville and the Harmony Chapter #273 Order of the Eastern Star in Louisville.

Survivors include, three sisters, Mary Evelyn Crain of Danville, Nellie Coulter of Willisburg and Molly Lyon (BC) of Austin, Texas; a sister-in-law, Faye Yankey of Springfield; as well as several nieces and nephews.

Funeral services will be held at 1 p.m., Saturday, March 18 at the Carey & Son Funeral Home in Springfield with Rev. Tim Mathis, officiating.

Burial will be on Cemetery Hill in Springfield.

Visitation will be from 4 until 8 p.m. Friday at the Carey & Son Funeral Home where an Eastern Star Memorial Service will be held at 6 p.m. Friday evening.