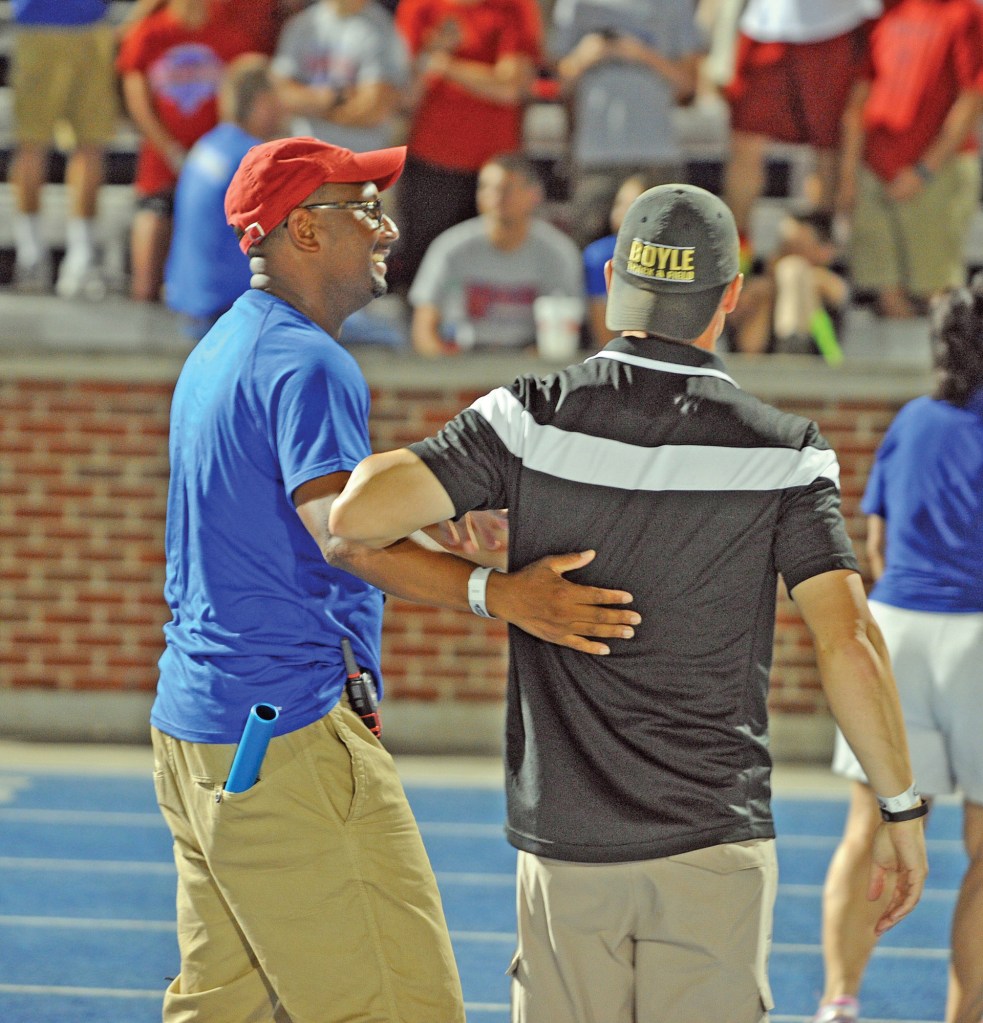 Boyle County and Mercer County are coming off historic track and field seasons.

This year, the bar is set even higher.

The Boyle girls blew the roof off of Class 2A at the state meet last year and return plenty of familiar faces. Mercer boys won the Class 2A state meet as well, by a razor-thin margin. For Boyle coach Brent Wagner, he’s not treating this season any different.

“We were ranked first in the middle of the season last year, we had a lot of kids ranked first and second in the state at the beginning of the season. So we’re not taking this season any different,” he said. “We had pressure last year. We don’t talk about rankings and stuff, we just try to get better in practice. The coaches figured out where to put kids in the best spaces and the kids show up and give everything they can in practice, buy in to what we’re saying. No different than last year.”

The Rebels’ motto this season is “Unfinished.” The girls’ team still has work to do to defend its title and the boys team will look to win its fourth region title in five years.

“We’re very, very excited and very hungry,” Wagner said. “That’s what I love to see more than anything. We had a great year, but let’s not talk on it or dwell on it. It’s a matter of, ‘Hey, we won, but we’re unfinished. We’re not done.’”

“Last year went so well for both teams,” Yeast said. “I just felt like there was only one thing we can do, that’s score more points than last year on the boys side and hope that duplicates another title. We just need to build our girls, we’re still relatively young on the girls side, so we just want to build on the success that we started last year.”

Mercer boys graduated three point-scorers from their state title team, but Yeast said he’s excited about some new athletes entering the fold in 2017. He started looking for athletes earlier in the year and has added a unique trip over spring break to help train the team.

“One of the things that I wanted to do, you always want to set the bar higher than the previous year,” he said. “I tried to do some things this year to recruit some kids to come out so we can try to build on last year and just improve our program. We started a little earlier this year, as far as recruiting, we started fundraising back in the fall to plan a trip. So now, I’ve got 55 kids going to Myrtle Beach on Spring break. We’re going down there to train and compete in the middle of the week while we’re there. We’re excited about that.”

Multi-sport athlete Camden Martin and soccer star Marcus Lewis are two athletes who Yeast expects will fill some of the gaps left by his seniors, most notably senior sprinter Chase Moore.

“I’m excited because, as important as Chase Moore was to our team, I didn’t know how I was going to replace Chase and I don’t know if you can replace Chase Moore,” Yeast said. “But I’m hoping some of these kids can come in and keep our relay teams strong.”

Boyle also has an influx of talented athletes that should score points in May. Like every other sport this season, the Rebels’ freshman class is expected to make a splash for the track and field team. Wagner noted Landen Bartleson as one sprinter who will step in and do well.

“We’re looking for them to have a big impact,” Wagner said. “But it’s not just the freshman class this year, we have some juniors and sophomores as well that are going to make some strides that are probably off of the radar right now, just being so new. We also have some returners that are going to step it up and do exceptionally well this year.”

Boyle’s boys graduated 80 percent of the points from their region-winning team two years ago, Wagner said, and this season they’re hoping to get back to the region pedestal.

One major benefit to the Boyle boys’ team is who they’ll face this season, namely, Mercer County. The Rebels will battle the Titans consistently on the track this season, and Wagner said that rivalry boosts his team.

The same can be said about the Mercer girls’ team, who placed 12th at the state meet last season.

“When I set the bar on the girls side, I set it with Boyle County on top,” Yeast said. “I keep saying to them we’re going to see (Boyle) a lot. We want them to know that we’re going to battle them every time. We’re going to push them to be better as we make ourselves better. I love supporting them, but in the end, as much as I love Brent and want to see him have success, our ultimate goal is to beat them. That’s what we’ll continue strive for. If you compete, you want to beat the best, and right now they’ve proven to be the best.”

Both Boyle girls and Mercer boys have some of the best competition on their own team: Mercer hurdlers Aaron Johnson and Dustin Baker won the 100 and 300, respectively, at the state meet last year. Boyle hurdlers Emmie Harris and Emily Knetsche could be No. 1 and No. 2 in each hurdle event this year, and Becca Tarter isn’t far behind in the 300 hurdles.

Yeast said he’s putting some of his speedy newcomers in with the seasoned state champions, and the competition in practice has been fierce.

“Today, we were doing a 200 workout. What I try to do, I’ll put Chase (Edwards), Dustin (Baker) and Aaron (Johnson) in the same group because I want them to be competitive,” Yeast said. “We’ve got some new kids that have come out that are really going to make us deeper. Those kids are competing in those same groups and it really makes for a competitive practice, because nobody likes to lose. That’s what I love about these kids.”

Yeast said Mishi Easterling is one athlete who he expects to step up and lead in multiple events this season.

Yeast will also get girls’ basketball players into the team starting next week.

Wagner said that champion mentality is something everyone wants to be a part of, and he and his coaches have stressed that being a champion doesn’t mean you’re done succeeding.

“We’re unfinished. That’s our motto this year,” Wagner said. “That’s on the boys side and the girls side. We’re staying hungry, we’re not done winning, and on the boys side, we won the region three of the last four years, but just because we lost last year to the state champions, that doesn’t mean we’re down in the dumps about it. We’re going after it.”

Yeast’s team is focused on time — not just on the track.