Looking Back: Elisabeth the Mouse

Elisabeth “The Office Mouse” was born in the 1950s in The Danville-Advocate Messenger.

Elisabeth had several different faces and different topics of local interest in the beginning, then toward the end of the brief column, it became more on the national front. 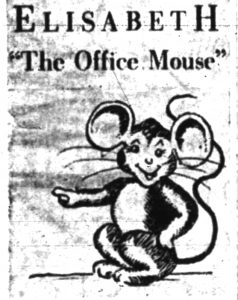 I’m not sure who began writing the daily column. It was probably written by different people on the news staff.

It was a surprise to me to find a column I wrote in 1993 about a real office mouse.

When Elisabeth first appeared in November 1954 in the newspaper, she was introduced as a “member of the staff in the capacity of commentator.

“She is a pert little character with pink ears and a long tail, and is thoroughly familiar with the news of the day. At times Elisabeth may be a little saucy, but we believe her comments will be mostly relevant and always proper.”

Her first column was about the state General Assembly members who “have performed in a manner that should give them a great deal of personal satisfaction. 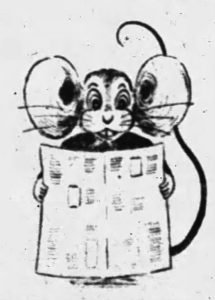 “They voted themselves a $600 tax free stake and have almost decided as to whether the golden rod or the redbud should be the official state flower, as if that made a lot of difference.”

“Now if they can just get bullet proof glass in the Legislative Halls they can adjourn without the threat of a special session to consider weighty matters.”

Elisabeth wrote a column in October 1957, about 100 teenagers who bought tickets on The Advocate-Messenger L&N Special for the Corbin-Danville football game, and unless nearly 200 more tickets for the train were sold before 5 p.m. the next day the trip wouldn’t be offered.

The money for the tickets sold will be returned to the holders of tickets and they will be “on their own to get to the game.”

Elizabeth did not want the youngsters to be deprived of the safe train trip. She believes that several hundred planned to go via train, but have not yet bought tickets. Four hundred seats have been reserved in the Corbin stadium for the train passengers.

It’s up to the public as to whether or not the train runs! 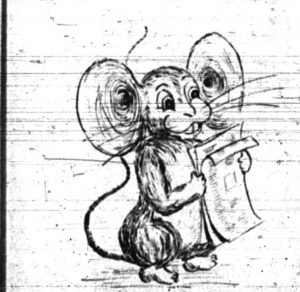 The Office Mouse was upset in November 1954 about the condition of band uniforms Danville band members had to wear during the Centre College Homecoming Parade.

After seeing the parade, she decided to do something about the problem. She bought a $1 ticket and tried to get all her friends to get one from the Band Boosters for the membership and admission to a concert at Jennie Rogers School.

She wanted 1,500 tickets to be sold to buy new uniforms for the bandsmen.

“If we don’t dress them better pretty soon, they will adopt as their marching song, ‘The Hobo’s Lament’, by Ann In Different Public.”

DHS band members Charles D. Lister and Bobby Watson were upset by Elisabeth’s article and responded saying they were proud of their band, even though it does not please some people.

The letter stated the band plays in all important occasions and in rain, snow, winter and summer. It also stated uniforms cost $3,600 and more help is needed.

They suggested the Office Mouse spend some of her time to help raise more money or “she might make a donation of several hundred dollars which the band will appreciate very much.” 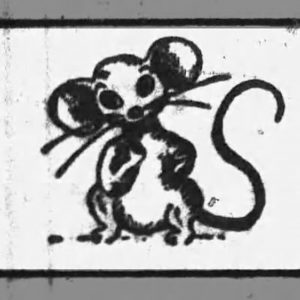 Elizabeth writes about a cat which got into some awful predicaments in a February 1961 column. Although she is not fond of cats, she may have a bit of sympathy for this cat.

“It seems that Mr. Tom (or maybe it was Mrs. Tom awakened one dark night last week all covered with dirty clothes that were delivered to the Danville Laundry for cleaning.”

Mr. Tom settled itself down in the clothes that night and when attendants at the laundry opened the bundled they saw the cat leap out.

An attendant informed the owners of Mr. Tom and told the owner the laundry cleans just about everything but that it had no facilities for cleaning (or dry cleaning) a live cat.

The owner of Mr. Tom said the cat had been missing about 18 hours and would return home if the attendant put the cat on Third Street, he would find its way home.

Five minutes later, Mr. Tom was home and fed and curled up in its accustomed place in the house.

Elisabeth was surprised at the responses she received when her November 26, 1956 column asked “What Does Danville Need Most?”

She was swamped with suggestions a few days later. The responses included:

A city park, not just a cow pasture, with municipal recreation in summer and winter; motorists who will yield to rights-of-way at intersections, expand police work to stop break-ins, and off-street parking; place for recreation for teenagers; and better relations between the farmer and local businessmen.

The Office Mouse columns ceased in the 1970s.

The Office Mouse was resurrected September 19 1993, after Elisabeth had been on vacation for about 20 years.

I think it was the only time a writer of the column was revealed, when I decided to write about a real mouse in the newsroom.

The real mouse appeared just before deadline on a busy Wednesday morning. First, in the classified department, then she moved to the newsroom. That was where the fun, or should I say the disturbance, began.

I was minding my own business, doing my job, when our visitor came into the newsroom. One of the girls in classified ads issued the warning to me, since my desk is in the front.

Everything was fine, until a reporter in back of me screamed, “There is a mouse!”

This was repeated by the reporter in the cubical in front of me. Both are terrified of mice. The rest of the newsroom became alert and started searching for the intruder — under the desks, through boxes and in desk drawers.

Everything settled down. Back to work.

I was doing an interview via telephone, when Elisabeth reappeared. The person I was interviewing asked if we were having a party. People were screaming, jumping up on chairs and biting their fingernails.

This prompted the maintenance man to run out and get mouse traps. These traps are modern; they even had plastic cheese to attract the mouse.

At one point during the morning, I was not sure whether we’d get a newspaper out or not.

Elisabeth apparently got the feeling that she was not welcome in the newsroom. She moved into the library, a bad mistake on her part.

One brave woman in the composing department was not scared of Elisabeth – she took care of the mouse with her shoe. Elisabeth bit the dust at high noon.

I don’t think Elisabeth appeared in The Advocate again, at least while I was there.

From our files, March 11

100 YEARS AGO — 1917 Dr. Ganfield leaves today for New York where he will work for the interest of... read more