Although plans moving forward, still about two months behind for new middle school 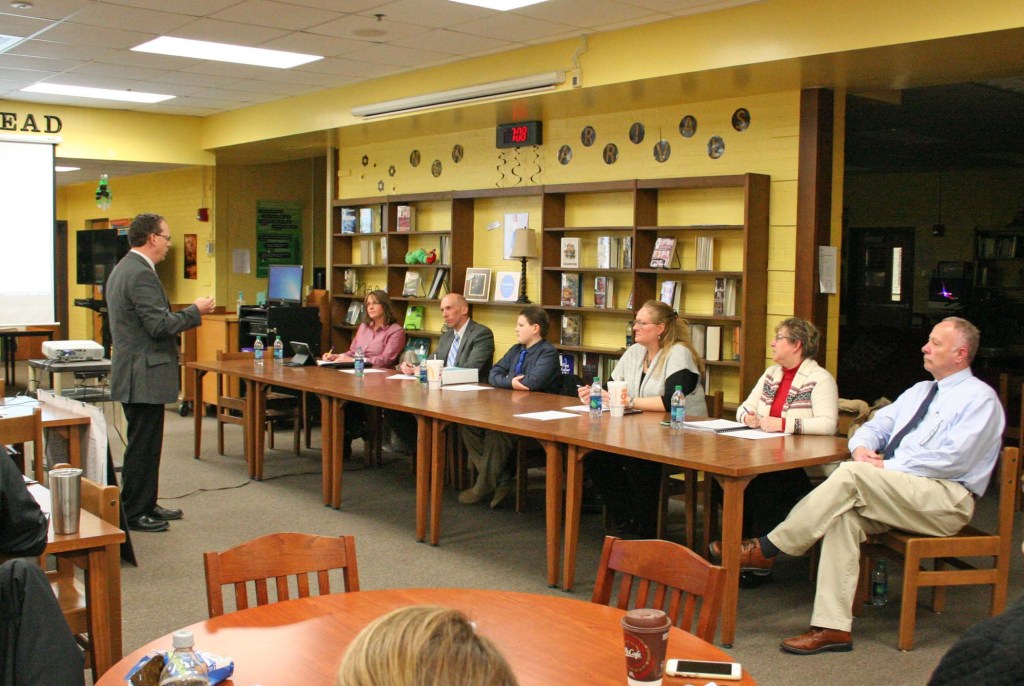 Kendra Peek/kendra.peek@amnews.com Tony Thomas, architect with Clotfelter-Samokar, addressed the Boyle County Board of Education Thursday night, including Superintendent of the Day Keller Smock, of Woodlawn, center.

The plan to complete the new Boyle County Middle School is about two months behind schedule, board members learned Thursday night.

“With what’s been going on with the BG-1s and the changes that have been happening, I think we’re really going to be hard-pressed to make the end date of Christmas 2018, without rushing, without hurrying, to get it done right,” said Tony Thomas, architect with Clotfelter-Samokar. A BG-1 is a form required by the Kentucky Department of Education, which includes estimated cost and specifications of the construction plan.

The next open date, Thomas said, would be the summer.

“Unless some miracle happens over the next couple of months … (December 2018) is really going to be a hard date for us,” Thomas said.

“We were on Christmas, and the beauty of that is that you had all that time to get the middle school converted into Woodlawn,” LaFavers said. “If you don’t move until summer, or late summer, you couldn’t move Woodlawn.”

Thomas said that might be doable — to aim for Spring Break 2019 as the completion date for the new middle school and moving everything during that week.

“We might have to back up from that date, like we did the Christmas one,” LaFavers said.

Steve Karsner, principal at the Boyle County Middle School, said he didn’t think it would be an issue.

“It won’t be a hindrance to the middle school when you move,” Karsner said. “Some aspects of moving during the year are easier, some aspects are harder.”

Thomas said he thought if the workers were ready as soon as school ended, he didn’t think it would be impossible for them to get the renovations completed in time for elementary students to be in the school by fall 2019.

“That doesn’t mean we can’t shoot for spring break — the earlier the better,” he said.

Board member Steve Tamme said if they had to, they could start the project in summer and move the students in the fall or winter breaks.

Thomas said the plans were coming along for the new school; they have to submit more detailed portions of certain aspects of the plans to the Kentucky Department of Education, such as the band room, media center, art rooms and science rooms.

“A lot of exciting things are happening in the media center and those collaboration areas,” Thomas said, explaining that it had expanded a bit.

The plans are moving forward with the performing arts center now, with potential for a fly loft in the future, but not including a fly loft. There’s also no basement in the plans. It will keep a large stage, he said.

“It’s still a beautiful theater,” Thomas said. “It will be the largest one we’ve done.”

He met with Frieda Gebert, in charge of the district drama department, regarding the stage.

Thomas said there had been “several meetings with several people” to get to this point in the design process.

“After tonight, if there’s really no comments, we’ll send this to a mechanical engineer, electrical engineer, structural engineer, to get them started developing this even further,” he said.

The board will have the opportunity to approve the design development plans at the next regular board meeting — at that point, the layout, Thomas said, is pretty decided, with the exception of minor changes. 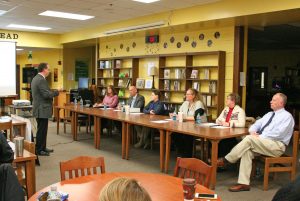 Kendra Peek/kendra.peek@amnews.com
Tony Thomas, architect with Clotfelter-Samokar, addressed the Boyle County Board of Education Thursday night, including Superintendent of the Day Keller Smock, of Woodlawn, center.