Of those, 17 people were not from Boyle County, but from a neighboring county.

For Sheriff Derek Robbins, those numbers are problematic.

“If we are are required to take them to Eastern State or a hospital like that, we are taking our resources — resources the taxpaying citizens of Boyle County pay for and we should be providing for them — we are taking those resources out for someone who hasn’t paid for them — nor do we get paid to transport. There’s no way to recoup (our time),” Robbins said.

Robbins said it generally takes a deputy three to five hours to make the round trip, register the person and sometimes stop to clean their car after, because some of the passengers “aren’t cooperative.

“We try to transport with the least amount of restraints as possible. If you don’t restrain them and they are upset and lash out halfway through the transport — which happens sometimes — our deputies may have to turn their lights and sirens on to get them there quicker because they’re banging their head on the door or trying to bust the window out.”

Robbins estimated his office makes 200 to 300 transports a year, 75 percent of which are for non-Boyle County residents.

As of March 13, Robbins said of the last 30 people transported, only four were Boyle County residents. There were one each from Casey, Jessamine, Laurel and Rockcastle counties; four from Mercer; eight from Garrard; and 10 from Lincoln. Some of the individuals were transported multiple times, Robbins said, and those repeats weren’t counted in his figures.

The cost on departments

Considering a deputy makes about $15 an hour, Boyle County has spent an estimated $765-$1,275 from March 1 to 13 transporting non-Boyle County residents for treatment. That’s not including the wear and tear on vehicles or the gas mileage.

The sheriff’s office is reimbursed by the state when transporting non-Boyle County residents — that covers mileage to make the transports. They are also reimbursed $125 per transport by Ephraim McDowell Regional Medical Center, and Bluegrass Comprehensive Care reimburses based on mileage, Robbins said.

“That covers from a monetary standpoint, but from the standpoint of you’re removing protection from the county for three hours, I don’t know that you can put a value on that,” he said. “You may be gone and there is no call, or you may have two or three (calls) that were very serious and needed immediate response and we either had to call somebody out or a state trooper — that delays response time.”

What the law says

There are differences in state statutes — KRS 202A.028 says the transports should be made “from the person’s home county by the sheriff of that county or other peace officer as ordered by the court.”

KRS 202A.101 states once facilities have been notified of an incoming patient, the “sheriff of the county … from the county in which the person is located” must transport them to the facility within 48 hours.

Both statutes also say transportation can come from law enforcement, an ambulance service or a third-party service.

“Not that these people don’t need the treatment — I’m not saying that — but taxpaying citizens here in Boyle County pay for a service that we’re pulling resources to provide for another community. And those communities aren’t stepping up and helping their own residents out. We take ours. Danville city takes the city transports,” he said.

Referring to 202A.028, Robbins said, “the statute, in so many words, says it’s the county of residence’s responsibility to make sure they’re getting the help they need. I’m not sure that’s happening.”

From the medical facility

In the past, explained Boyle County Attorney Richard Campbell, the hospital has worked out an agreement with the sheriff’s office to cover the costs of transports. The issue came to a head about 10 years ago and Campbell said he spoke with judges who were encouraging area sheriff’s offices to transport their own residents.

“(Some of the sheriffs) just kind of thumbed their noses at that. The hospital, in the meantime, had a patient that needed to be transported,” Campbell said.

At that time, Ephraim McDowell agreed to reimburse the SO for costs of their transports

Every so often, the issue comes back to the surface, Campbell said, but is typically worked out somehow.

According to Mark Milner, chief nursing officer and vice president of Ephraim McDowell, the hospital’s practice is to call the county of origin first.

“Typically, they refer it to the local sheriff’s office,” Milner said.

To force area police departments and sheriff’s offices to transport their residents would require taking the matter to the courts, which is not something officials want to do, Campbell said.

Robbins said his office has a good relationship with the hospital and with Boyle County Fiscal Court, and he’s grateful for the help he receives from both.

“(The court) is helping us in ways — without their help, we wouldn’t be able to do our job,” he said.

But resources are still limited.

Garrard, Lincoln and Mercer counties have some of the highest numbers, Robbins said.

“Ninety-five percent of the time, we have one deputy out and if we run across a mental health issue, we could be tied up for four to five hours,” Graham said.

If someone is in need of mental health treatment, Graham said, and they are willing to go themselves, the Garrard County EMS will typically transport to Ephraim McDowell.

“If they’re trying to do harm to themselves or others, we take them to Eastern State. We have done that a few times,” he said.

Graham said typically any Garrard County residents needing to be transported from Ephraim fall to the Boyle County Sheriff’s Office, but if they are tied up, they will sometimes call his office for help.

When it happens in Garrard County, Graham said the Kentucky State Police will sometimes help them out by monitoring calls, but that the trooper “can’t sit in Garrard County,” because the one trooper also has three or four other counties to monitor.

Lincoln County Sheriff Curt Folger said he has the same situation with transports from Fort Logan hospital falling on his office. It’s his understanding that the county where the patient is at the time of the call is the county responsible for making arrangements to transport.

“Anyone that is admitted into Fort Logan, it’s our responsibility to take them if they have to go to Eastern State,” Folger said.

His office has transported individuals from Pulaski, Garrard, Laurel and other counties, he said.

Mercer County Sheriff Ernie Kelty said his office is willing to do what they need to help transport Mercer County residents, but that he’s rarely contacted by Ephraim McDowell. He faces a similar problem in Harrodsburg with James B. Haggin Memorial Hospital.

“If Ephraim did call me, I would do what I could to help them. If they’re seeking help and they want help, that’s what I’m there for,” Kelty said.

His office does make its own transports of Mercer County residents from the Boyle County Detention Center, Kelty said.

“We try to work as a team with everybody … When we’re cooperative with one another, that works out best for everybody,” he said.

There are enough transports to demand a full-time person dedicated strictly to making those runs, Robbins said.

“If we’re going to be tasked with doing this, we need to find a way to find the resources to do it,” Robbins said.

That’s the main issue, he said. If the Boyle County Sheriff’s Office had the resources or had a means of funding it, Robbins said, it wouldn’t be an issue.

“If we billed for this and we were able to provide a full-time transport guy, that would be a different story. It puts a burden when your resources are limited, as they are, to respond to emergency calls and you have to take resource from our community to take a non-resident somewhere … we have to find some kind of balance there,” Robbins said. “It’s not something that’s easy on anybody.” 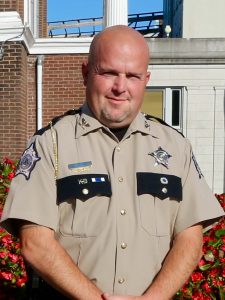