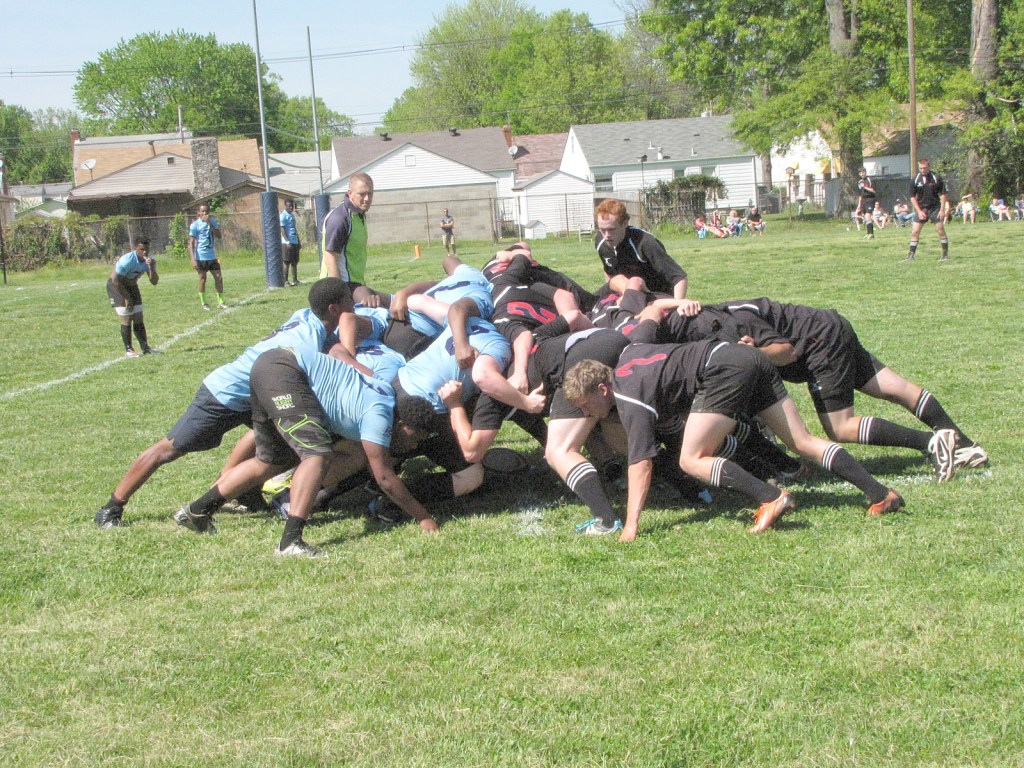 Photo by Kelly Goggin Here the Spartans are continuing to develop the technique of a scrum. A scrummage is an act of restarting the game where players interlock and push to gain possession of the ball.

Beginning last spring, several students from Boyle County High School and other surrounding schools such as Lincoln, Mercer and Burgin joined together to form a unique team. What initially began at Lincoln County in the spring of 2015, spread into a Central Kentucky venture.

This unusual grouping was chosen as the best way to introduce the sport of rugby to multiple schools. 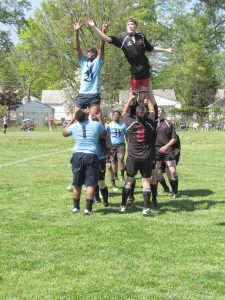 Photo by Kelly Goggin
The Spartans have learned to fight to catch the inbounding ball in a line-out, which is similar to a soccer throw-in. When the ball goes out of bounds, players from both teams hold up a teammate to catch the ball to secure possession.

Rugby is the original sport from which American football evolved. While Rugby is played year round on college and adult teams, it is primarily played in the spring in high school. To simply describe, rugby is a game involving two unpadded and unhelmeted teams of 15 players who try to touch the ball down in the other team’s try zone to earn points during an 80 minute match. It is a game of continuous action, limited substitutions, and a running clock.

Just a year ago, The Central Kentucky Rugby Football Club (CKRFC) Spartans was assembled  by former UK Rugby player and Boyle County Assistant Principal Steve Goggin and Paul Brooks who started the team at Lincoln the previous year. In 2016, Brooks took a position at Mercer High where he contemplated introducing the sport to his new students.

With conversations between the two coaches ensuing, Goggin shared how the idea began to soar. “The Kentucky high school rugby community approached me about taking over the program, so Coach Brooks and I decided to join forces and open up the opportunity to all surrounding areas rather than just one school.”

Now with a great plan in mind, Goggin and Brooks immediately began recruiting members from area schools. Goggin said that people unfamiliar with the sport were hesitant at first to join the team.  However, after watching the first match from the stands, many other boys were inspired by the action and decided to join in the fun. Since then, the team has grown to include over 25 players from several schools. 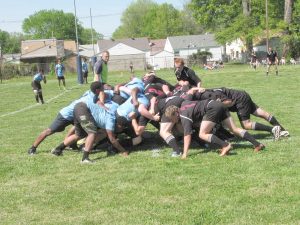 Photo by Kelly Goggin
Here the Spartans are continuing to develop the technique of a scrum. A scrummage is an act of restarting the game where players interlock and push to gain possession of the ball.

The team has seen much improvement since its first year. “Last spring was a year to develop a foundation, but this year, returning players are experienced and ready to put forth great effort,” Goggin explained.

One such returning player is Boyle Junior Isaiah Isaac who is excited about the current season. “This year we are showing some progress. Last year, we placed third out of the five teams in the state of Kentucky, and we are doing even better this year. We are excited to see what happens.”

Isaac also recognizes the effort that the coaches put in. “Coach Goggin is an awesome coach. He really goes out of his way to make sure that everyone understands what they are doing.”

Goggin is optimistic about the future of the sport in Kentucky, which lags behind surrounding states who have established high school programs.   “Now, there are only a few  teams in the state playing. But rugby is a growing sport, and in the future we hope see it in many schools across the state.”

You can see the Spartans in action as most games are played either in Danville’s Millennium Park or in Louisville. As the team develops a fan base, consider attending their 3 p.m. match on Sunday, March 26 at Millennium Park against the Atherton Highlanders.

Be prepared for an intense match displaying an old European sport that is relatively new to the local high school community.

A main concern of students is having their voices heard at school. The avenue for expression has previously existed, but changes this year have made the vocal processes easier and more efficient as now students have a direct method to be heard. 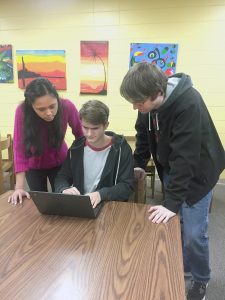 It begins with each class electing officers, which collectively make up a student council. Previously, this elected group met only when administrators required student input. However, the senior officers this year wanted to initiate the conversations themselves.

One of the senior class officers driving the change is Dillard Collier. Collier decided that it was time to establish a more active student government because “students should be given the opportunity to express their concerns and problems with school policies, and that’s one of the main purposes of a student council.”

Collier made this conviction after participating in two previous student councils. He and the two other senior class officers, Joy Conge and Logan Honaker, requested to meet with administrators to create a new framework for the council. These seniors then established a student council that would soon create mandates for monthly meetings and procedures for voting on school based topics.

Since the implementation of this year’s council, Collier has been elected as president, a job he describes as guiding. “My role as student council president is to guide the class officers in maintaining their representative obligations. I lead the student council discussions, and I ensure that every class officer is given the opportunity to voice their opinions.”

Conge plays a supportive role as vice president. “I assist the student council president, and I preside over the meetings in his absence. I research evidence for arguments. I am also an outlet for the senior class. I help the president set the agenda and contribute during meeting discussion.”

The council is supported by Honaker’s administrative skills as secretary. Honaker describes his role as being vital to maintaining a coordinated student government: “I am the head secretary of the entire student body. My job is to record the meetings and decide what is going to be on the agenda with the president and vice president.”

“I also keep the time for each order of business during meetings. I keep the attendance to ensure a quorum (minimum required attendance for the council to meet) and tally votes. And, like any other member, I participate in the discussions.”

The student council’s agenda for this year includes several important matters, such as debating the recitation of the Pledge of Allegiance in the high school and the revision of the dress code. More importantly, students now have the opportunity to raise other concerns through their class representatives to be discussed by the council. Students now have the ability to bring important topics to a class representative, who then presents it to the student council and administration.

These three seniors have established a legacy that can be solely attributed to them. Thanks to their hard work, students will be able to positively shape the school experience for years to come.