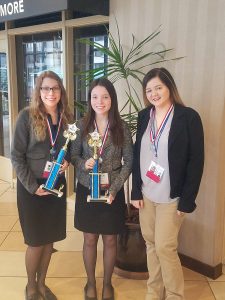 On March 6, three Boyle County seniors, from left, Laura Nolan, Emma Nolan, and Casey Craiger, competed at  the 2017 State DECA Conference for the final time. DECA (Distributive Education Clubs of America) “prepares emerging leaders and entrepreneurs in marketing, finance, hospitality and management in high schools and colleges around the globe” (deca.org). All state competitors must first qualify at the regional level in order to advance to the state level. Every year, over 1,000 students across the state gather to compete in various categories.

Nolan and Nolan competed together in the Buying and Merchandising Team Decision Making competition and came out on top at first place. This is the third year in a row that the duo has received first in a Team Decision Making event at the state conference, a very difficult feat. In the past two years, they placed first in Financial Services.

Craiger also did a fantastic job by placing in the top five of the Marketing Communications Individual Series event. She competed against approximately 30 other students in this very competitive event.