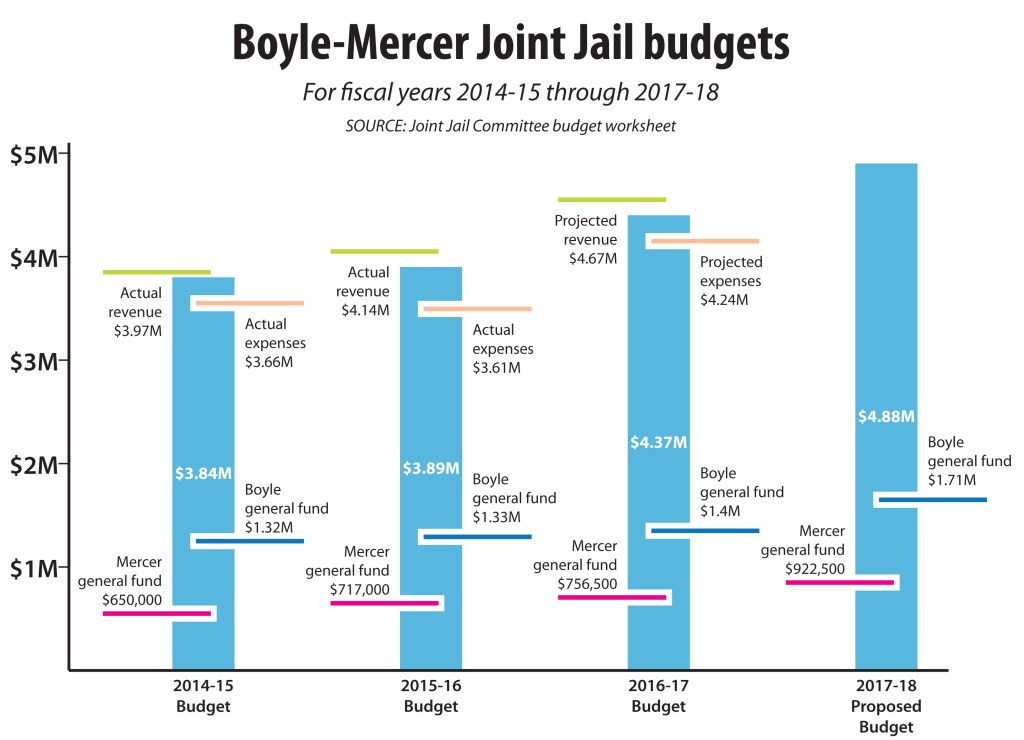 Graphic by Ben Kleppinger The cost to operate the Boyle County Detention Center has risen from $3.66 million in fiscal year 2014-15 to an estimated $4.88 million in fiscal year 2017-18 — a 33-percent increase over the four-year period. Budget documents from Boyle County Treasurer Mary Conley reveal that revenues have consistently come in higher than budgeted, while expenses have consistently come in lower than expected, even as costs continue to rise. Over the same four-year period, the annual contribution from the Mercer County Fiscal Court general fund has risen from about $650,000 to a projected $922,500; and contributions from Boyle County have risen from about $1.32 million to a projected $1.71 million.

Boyle and Mercer counties could see their general fund costs to operate their joint jail facility go up by close to half a million dollars next fiscal year, according to a proposed budget prepared by Boyle County Treasurer Mary Conley.

However, that expensive news came with a silver lining when Conley presented the budget to the Boyle-Mercer Joint Jail Committee: The two counties are currently projected to spend about $282,000 less than originally budgeted in the current fiscal year.

Conley’s budget was reviewed in-depth by the committee and will now be put before both counties’ fiscal courts for approval. It calls for the following amounts to be spent out of the counties general funds:

The counties general fund contributions would make up about $2.63 million of the approximately $4.88 million in revenue expected for fiscal year 2017-18. Other major sources of revenue would come from housing state inmates and convicted felons (around $1 million total); money spent by prisoners in the jail canteen and on phone calls ($310,000); and state funding (around $100,000), according to a budget spreadsheet provided by Conley.

Among substantial new expenses would be $300,000 for the jail’s new intensive outpatient (IOP) drug rehabilitation program. That amount would allow the program, run by Shepherd’s House out of the old Red Cross building in Danville, to operate at its current maximum capacity of 60 participants for the entire year.

The IOP program began at the end of February and currently has 20 participants. Officials hope to expand to 40 participants in April, then 60 in May.

The jail’s budget for the current fiscal year was set at about $4.37 million. But Conley now projects only about $4.24 million in expenses. Conley projects total revenues will come in at about $4.67 million.

The counties share a vast majority of the expenses for the Boyle County Detention Center, with Boyle County taking a larger share of the cost because it has more prisoners.

Both counties also have much smaller individual jail budgets for unshared costs such as jailers’ dues and new equipment, Conley said. Those county-specific budgets are not included in the budget information Conley presented Friday.

Conley said the proposed budget is “a good budget,” but it can’t account for everything that might happen with the jail in the next year.

“I’m not real happy about the uncertainty of what we’re going to do next year … uncertainty coming from what we’re actually going to do with the jail facility itself and the timing of all that and how that’s going to move forward,” she said. “I don’t know if I need to put something in here — I wouldn’t even know what to put in here … it may be that we have to amend our budget in the middle of the year.”

The counties are currently looking into options for planning a new jail facility or an expansion of the current facility in order to handle increasing numbers of inmates.

Boyle County Judge-Executive Harold McKinney said “it bears being put in the minutes that we’re not putting anything in here (for that), that we may have to amend the budget.”

Mercer County Attorney Ted Dean said he thinks the budget “reflects the costs we’re going to have if our population stays the same.”

“And that ‘if’ is in bold and like 15-point font and italics and everything else,” Dean said.

The Joint Jail Committee approved the budget as presented by Conley and sent it on to the fiscal courts.

“Good job on this budget, Mary, particularly with the unknowns that we are all dealing with,” McKinney told Conley after the vote. “I think it’s not a shot in the dark but it’s … kind of a wing and a prayer a little bit.”