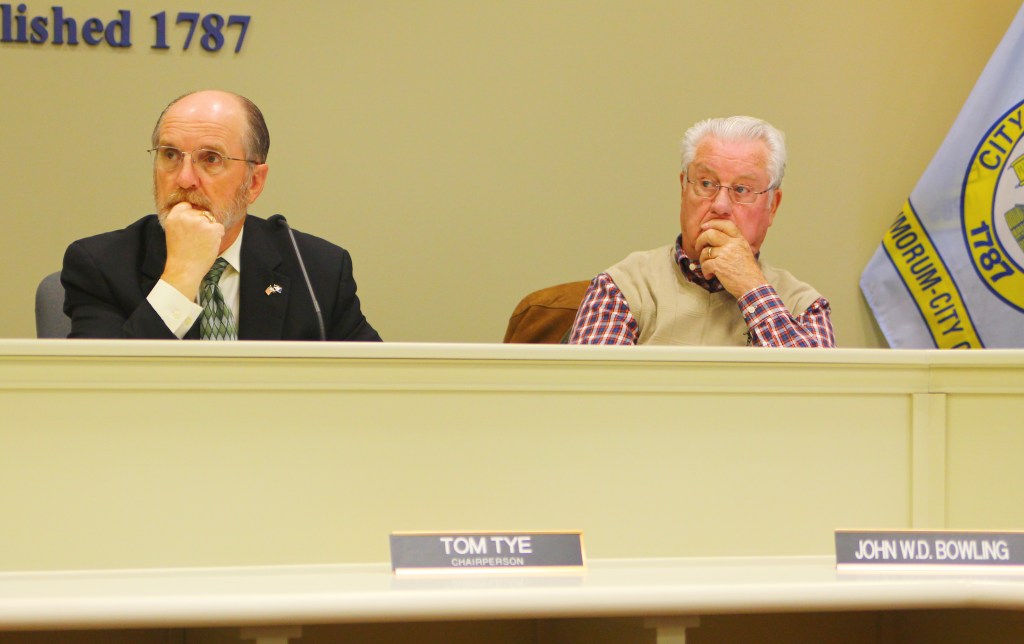 Multiple businesses in downtown Danville want more freedom to put up signs and take ownership of how their buildings look.

Signage rules were the hot topic at a meeting of the Architectural Heritage Board Wednesday morning, and almost no one had anything nice to say about the current setup.

The meeting was called to get public input as the AHB drafts new design guidelines for the city’s historic districts. 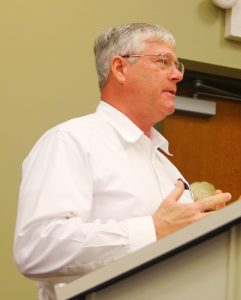 Ben Kleppinger/ben.kleppinger@amnews.com
Bernie Hunstad, a former Danville mayor, speaks to the Architectural Heritage Board Wednesday about his desire for “libertarian” rules concerning signs in downtown Danville.

After multiple people told the AHB members that current guidelines have prevented murals and signs from going up in the downtown historic district, former Danville Mayor Bernie Hunstad asked for any downtown property owners in attendance to stand up — a substantial majority of those gathered stood. Hunstad then asked any of those standing who don’t have an issue with current signage rules to sit down — no one sat down.

“Signage is the issue that really is the lightning rod for this,” he said. “It was when I was mayor and I think that it will be today.”

Complaints about signage rules focused on limits on the size of signs and the size of lettering, as well as restrictions that prevent large murals or hinder the creation of public art.

Mary Robin Spoonamore, a business owner and chair of the Heart of Danville Main Street program’s design subcommittee, said she would like to see new signage rules that would allow more freedom and creativity from local business owners, while allowing Danville to maintain its status as a “certified local government” (CLG).

“Even you guys have expressed — you love ideas, you want to do things to, but you can’t do them (under current guidelines),” she said to AHB members.

Kirby Stafford of Kirby’s Custom Signs said he has done wall-sized murals in Louisville and Lexington, among other places, but not in Danville.

“It was kind of sad that I never got to do one here in town,” he said. “… I’m here to support the community and the art industry as far as getting something out there maybe more lenient on the sign ordinance.”

Brandon Long, artistic director for the Community Arts Center, said he considers Stafford’s wall murals art, but the current guidelines do not differentiate well between business signs, art or advertisements.

“I think a lot of times words get misconstrued as signage,” he said, explaining that he has been contracted to create art on Main Street in the past and he had to be mindful to keep any textual elements small enough that they wouldn’t violate signage rules about the size of letters.

Early in the meeting, AHB member Mary Girard said when it comes to signage, “our hands are tied by what Planning and Zoning dictates.”

“We’re working with what we can work with, but we get things told to us as well,” she said.

Hunstad responded to that statement later in the meeting, saying “we talked about Planning and Zoning, that a lot of this is out of your control. I think if you take that attitude, you’ve already failed to a large degree.”

Hunstad encouraged the AHB to “take a libertarian viewpoint” when it comes to signage rules and “let it go.”

Hunstad said he would like to see two rules concerning signs — that they cannot be a safety hazard and they cannot cause damage to existing historic structures.

AHB Chairman Tom Tye wondered if the AHB “came up with something on signs,” and if that could be “pushed up the stream” to Danville and the ordinance currently limiting signs could be modified.

Alan Higgins, a consultant with Cultural Resource Analysts, the third-party company hired to help rework the design guidelines, said it is important for the new guidelines and the city’s ordinances to be in alignment.

Danville City Manager Ron Scott said the Danville City Commission is expected to discuss hiring a consultant to work on “way-finding signs” in the city at its next meeting.

“That’s something that we’ve tried to do for a year or more here and we’re finally getting to the point of having that work begin, assuming the city commission approves the recommendation,” he said. “That will also aid the downtown merchants in terms of having successful outcomes.”

Logan Germann, a realtor and vice president of the Heart of Danville, said he thinks the buildings in the downtown historic district that are best maintained are the ones that are “economically viable.” Having too much “bureaucratic red tape” when people want to move a business into the downtown district is “not helpful,” he said.

“I know it’s scary and I know there are some of us in the room that have gotten to a point where all change is scary, but if we don’t have change, if we don’t have progress, we’d be left with a city that has livery stables and tanneries downtown. I think we all know we’ve moved past that even though those are historic uses for downtown,” he said. “So I think a liberalization and a shrinkage of the downtown architectural review guidelines would be of great benefit to the city.”

Hunstad later told AHB members he believes there will be a simple indicator in the future of whether the new guidelines are successful:

The AHB is on an “extremely tight timeline” to complete the process of drafting new design guidelines, Girard said. That’s because the money to pay CRA for its consulting services is coming from a grant that requires completion of the project by June 30, she explained.

But completion of the project is just a first step and it doesn’t mean the new guidelines would be in place on June 30, Code Enforcement Director Bridgette Lester said. Instead, the draft guidelines would be taken to Planning and Zoning and then the Danville City Commission before a final version could be adopted, she explained.

“The product we get is a working document still and is not in final approval, so we can still work from there,” she said.

Higgins with CRA assured those at the meeting that the current guidelines are not being scrapped — instead, the new guidelines will attempt to improve on the existing guidelines, in order to incorporate new things and remove confusion.

It’s important that the guidelines reflect what the community wants so they can be embraced — that’s why the AHB is seeking public input, Higgins said.

The plan is to have a draft of the new guidelines available in April, at which point there will be a 30-day review period for the public. The AHB and the Kentucky Heritage Council will also review the draft, Higgins said.

Higgins said he has worked on updating historic design guidelines in many cities and has been impressed with the amount of community participation in the process in Danville.

“You don’t see that, honestly, in a lot of communities,” he said. “It’s a good thing and it’s something to be encouraged and it’s certainly helpful to the process.”

Cultural Resource Analysts has created a Facebook group concerning the drafting of new historic design guidelines, where members of the public can add their input. The public group can be joined by anyone and is named “Danville Design Guidelines Update.”