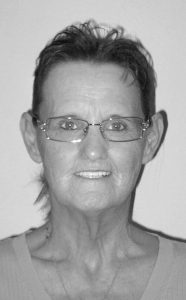 She was born in Tiffin, Ohio on February 1, 1958, daughter of the late Arville Angel and Anna Ruth Gibson Williams. She was a homemaker and a member of Pine Grove Church in Liberty, KY. She loved gardening and canning and spending time with her grandchildren as much as anything.

She was preceded in death by her parents, one brother, Robert Angel and one sister, Patricia Snow.

A memorial service will be held at 4 p.m. Sunday, March 26, 2017, at Morris & Hislope Funeral Home with Bro. Jeff Edwards officiating.

Visitation will be after 3 p.m. Sunday at Morris & Hislope Funeral Home.