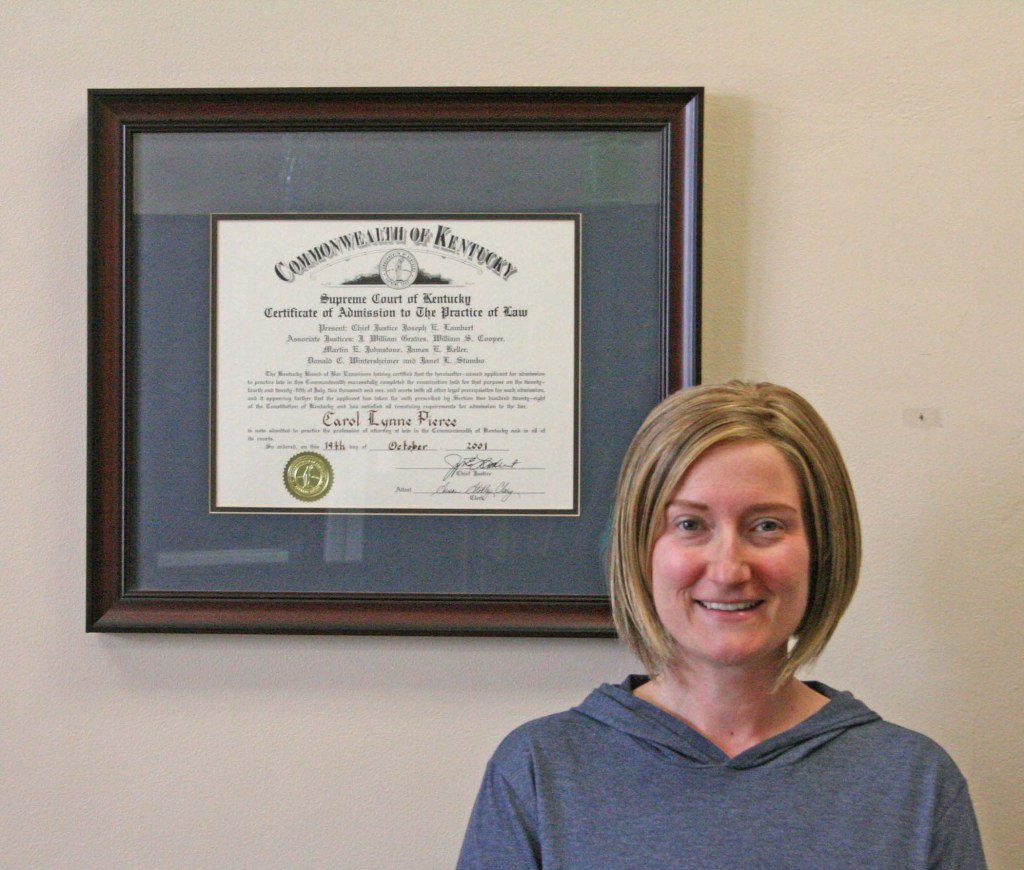 Kendra Peek/kendra.peek@amnews.com Lynne Dean will be taking over as Boyle County Attorney as of April 1, replacing the retiring Richard Campbell. Dean has been the assistant county attorney for nine years.

Dean, who has worked as the assistant county attorney for nine years, said she was “pleased” about being appointed to the position.

“I’m very excited. I’m going to miss my boss — it’s going to be different,” she said.

She thinks the transition will be “smooth” because of the good relationship with the county attorney’s office, the judges, local law enforcement and all the other agencies involved in the judicial system.

A Paducah native, Dean obtained her undergraduate degree from Transylvania University, before completing her law degree at the University of Kentucky. She started her 16-year law career in Louisville doing “everything under the sun.”

“It’s where I want to stay and raise my children.”

Dean will be the first female to hold the position of Boyle County Attorney, she said.

“I hadn’t really thought about that — when we were looking at the order, we had to change the multiple references to ‘he’ to ‘she.’”

Dean said that sets a good example for her daughters, but more than that, she wants her children to see their mom doing a job she loves.

“I had a great job in Louisville that I left because I was bored. I came here and I started this job,” she said. “(Before) I liked being a lawyer, but when I started here — I really love what I do.”

“Knowing their mom is doing something that she enjoys and is successful at … I want them to find that same kind of enjoyment at work, no matter what it ends up being.

Her husband, Philip Dean is a Boyle County Sheriff’s Deputy. She said they have so many cases that she doesn’t keep up with the ones that are his, but when it comes time for a hearing, they do make sure the defendant’s lawyers are aware of the connection, and that the defendant is aware.

Retiring Boyle County Attorney Richard Campbell said he recommended Dean in his letter of resignation, calling her a “scrupulous prosecutor.”

“I think she is someone who would be sensitive to the needs of the people that she serves,” Campbell said on Friday. “I told the judge — I think she would be a wise counselor. I think people will consider her to be a distinguished county attorney when all is said and done.”

Dean said she will miss Campbell’s presence around the office, because they have worked so well together.

“His strengths are in areas different than mine. We’ve meshed well,” Dean said.

Her daughter, Nora Grace, even wrote him a letter, has been sad and wondering if “she would ever see Mr. Richard again.”

The children have grown up within Dean and her husband’s careers, and are common faces around the courthouse. She said they are excited for her. They are also in preparation mode — Dean said she is planning to run for the position of the Boyle County Attorney in 2018.

“Obviously, I love what I do, or I wouldn’t have done it this long. I’d like to do it as long as God and Boyle County will let me do it,” she said.

Dean said one of her strengths is juvenile court and cases involving children.

“That’s really what I’ve been passionate about since I’ve been here. Those are hard cases, but that’s really where I feel like I’m making a difference,” she said. “There are so many different facets to the county attorney job — that’s part of what I like, it’s never boring.”

Some days are high drama in court, some are fast-paced, some are a little more mundane, but Dean said she likes it all.

Recently, Dean resigned as the Perryville City Attorney, with plans to stay on until they hire a replacement. She is currently the city attorney in Junction City and serves as attorney for the Lake Village Water Company. It’s likely she will have to step down from those positions, she said, because of the demands of being the county attorney.

Dean said she is grateful for the opportunity to have worked with retiring Boyle County Attorney Richard Campbell.

“He’s given me the opportunity to grow as an attorney and as a prosecutor. He let me do things my own way,” she said. “He’s given me guidance, but never told me, ‘You have to do this.’”

“It’s a tough job, but an important one,” Dean said.

“A long time ago, I thought I ‘lost’ a case and he told me, ‘It’s not our job to win or lose. It’s our job to make sure justice is done,’” Dean said. “I’ve tried to abide by that philosophy.”