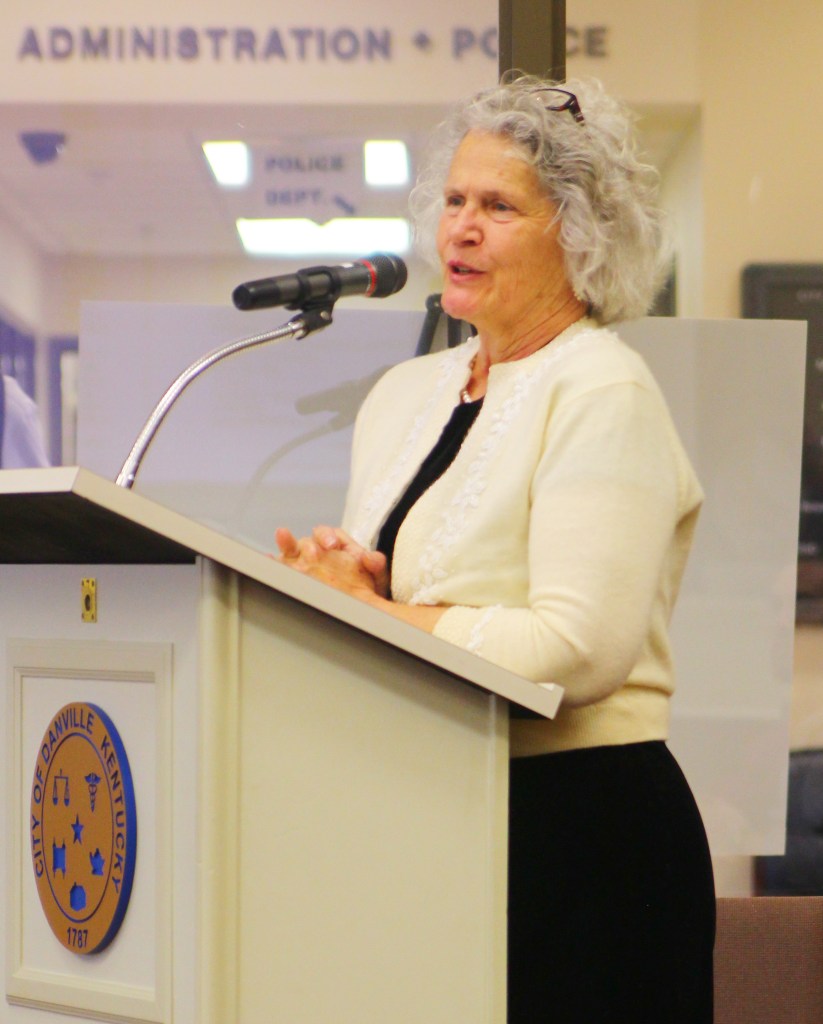 Danville’s elected officials held a marathon of a meeting Thursday, as they listened to funding requests from the city’s four jointly-funded agencies and 24 community agencies.

The meeting began shortly before 9 a.m. and continued past 3 p.m., with commissioners barely pausing even for lunch.

The 24 community agencies took up most of the day, as a wide variety of non-profit groups and agencies explained the things they do for people in Danville. Community agencies requested a total of $230,500 in funding. Danville awarded $200,550 last year.

Members of the commission graded each community agency in five areas:

• the number of citizens who benefit from the services;

• the impact on quality of life for Danville citizens;

• whether the program duplicates what other programs are doing;

• whether the applicant has also applied for funding from Boyle County; and

• the importance of the program to the local community.

Those scores will be averaged and City Manager Ron Scott will then bring the rankings back to city commissioners to help them determine how much funding to allocate to each agency. Scott said the commission may discuss the scores and funding allocations as soon as April 13.

A maximum score is 100 (20 points in each of the five areas), while every agency must score a minimum of 60 in order to be considered for funding.

The city’s four jointly-funded agencies, which it shares responsibility for with Boyle County, are each assessed individually — the ranking system is not used.

The community agencies that requested funding in order of their appearance before the Danville City Commission are:

The Arts Commission has two new programs it is working on that prompted it to request additional funding, said Mimi Becker, executive director of the Arts Commission. It has commissioned a play written by an inmate at Northpoint Training Center, which will be available for all schools in Danville and Boyle County to perform. And it’s attempting to increase awareness of the arts through a program that will help diverse and young families experience the arts.

Big Brothers Big Sisters provides case management for at-risk children and mentors in an attempt to give those children more positive relationships. The local organization is regional; in addition to Danville, it requests funding from Lincoln, Boyle and Mercer counties, as well as Stanford and Harrodsburg. It also fundraises for a large portion of its funding and currently has some grant funding.

The $1,500 the city provided last year is used for crisis intervention. BCAP is asking for an additional $7,500 that be used for the agency’s “55 and Alive” program, said Troy Roberts, executive director. “What that is for is for additional transportation and activities for the seniors here in this county,” Roberts said. 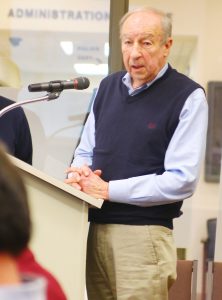 Helping Hands assists needy members of the local community by building or installing wheelchair ramps, paying for utility bills and covering lodging for people who might otherwise be homeless on the streets.

• CASA of the Bluegrass

CASA of the Bluegrass provides court-appointed special advocates for neglected and abused children in area family court systems. Director Laura Guerrant told city commissioners that CASA has “received state funding for the first time in the history of Kentucky.” The need for CASA volunteers is growing, but donations are also increasing as news of the drug epidemic makes people more aware of the “horrors these kids face,” she said. 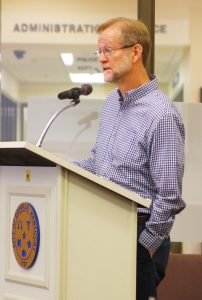 Centro Latino provides services, especially to children, in three main areas — health care advocacy, after-school services and summer camp. Rick Axtell with Centro Latino said recently, the group has been running sessions for local families who are afraid that deportations could break them apart. Centro Latino has worked with families where the children are U.S. citizens but they could be separated from their parents if the parents are deported. The organization has helped them make sure documents such as birth certificates and passports are obtained and that power of attorney is setup to provide for who will care for the children if the parents are deported, Axtell said.

“If you just could have seen the fear and the urgency in the eyes of these families, fearing that they will be split up — it was a deeply moving experience,” he said.

Citizens Concerned for Human Relations wants to use funding from Danville for the fourth annual Frank X. Walker Festival — a literary festival held in honor of Walker, who is a Danville native and Kentucky’s first black poet laureate. The organization would also use the funding for workshops conducted throughout the community, said J.H. Atkins, a member of CCHR who is also a city commissioner. Atkins recused himself from voting on the CCHR funding. 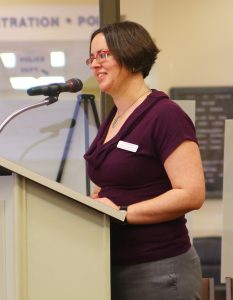 The Community Arts Center provides a wide array of arts-related programming to Danville, and serves as an umbrella agency for eight additional arts programs. “We are about increasing access to the arts. We believe in making the arts available to everyone in the community,” said Kate Snyder, director. Snyder added that the arts center also serves as an economic and tourism driver for the area.

The Community Education program is run out of the Boyle County School District, with additional funding from Danville and Boyle County Fiscal Court. The funding pays for a director’s salary and the program provides educational workshops, unique services and classes for community members. It partners with the Danville-Boyle County Senior Citizens Center on multiple projects.

Family Services provides emergency services for families in need, including direct financial assistance for utility bills or items such as car seats; and referrals to other agencies when appropriate. The request is up this year because funding from other sources such as the United Way is down, said director Crystal McPherson. That decline in funding means Family Services has not been able to help as many people in need, she said.

Grace Café is a pay-what-you-can restaurant in Danville that operates as a non-profit agency with a goal of reducing food insecurity. The restaurant has been denied community funding in the past because it has been unable to provide specific numbers on how many people are helped by its work. This year, the restaurant provided the results of a survey conducted by Centre College students in an effort to document its impact.

The Great American Brass Band Festival is Danville’s largest annual festival, which attracts tens of thousands of people from around the world. Director Niki Kinkade said it had a $3.4 million economic impact in Danville last year.

Heritage Hospice requests $600 every year to help fund its annual Veterans Day thank-you dinner at the National Guard Armory building on Nov. 11. This year will be the 10th year — and the first Saturday — for the event.

KyADAPT (Assisting Deaf Adults to Participate Totally) is an independent living program for deaf people who also have other disabilities. Five-hundred dollars of the request would go to “expand our volunteer opportunities for our clients,” program director Dahlia Haas said. “They really want to give back, they don’t want to just be takers; they want to be givers back, and if we have a little extra money to fund that, we fully intend to do it. We can do more.” 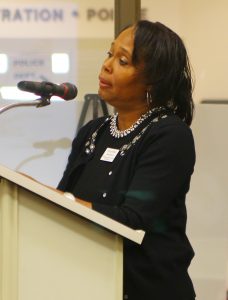 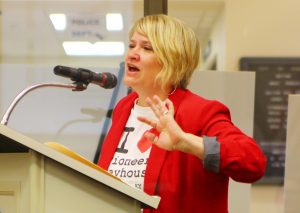 Pioneer Playhouse puts on six outdoor plays a year at its Stanford Road location, including an annual “Kentucky Voices” play that tells a story about local people and places. For the 10th year of Kentucky Voices, the playhouse is doing two Kentucky Voices plays this year, said Heather Henson, managing director. 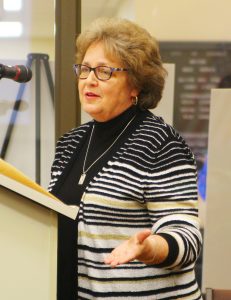 West T. Hill Community Theater has been producing plays since 1979. Managing Director Karen Logue said the theater is asking a smaller amount this year to help with summer camps that will feature visitors from Danville’s Sister City, Carrickfergus, Ireland.

Wilderness Trace provides preschool for children with severe developmental disabilities. Children with disabilities learn alongside children who do not have disabilities. Executive Director Libby Suttles said the center is continuing to see year-over-year growth in its enrollment and work has begun on a strategic plan to add on to the facility for more students.