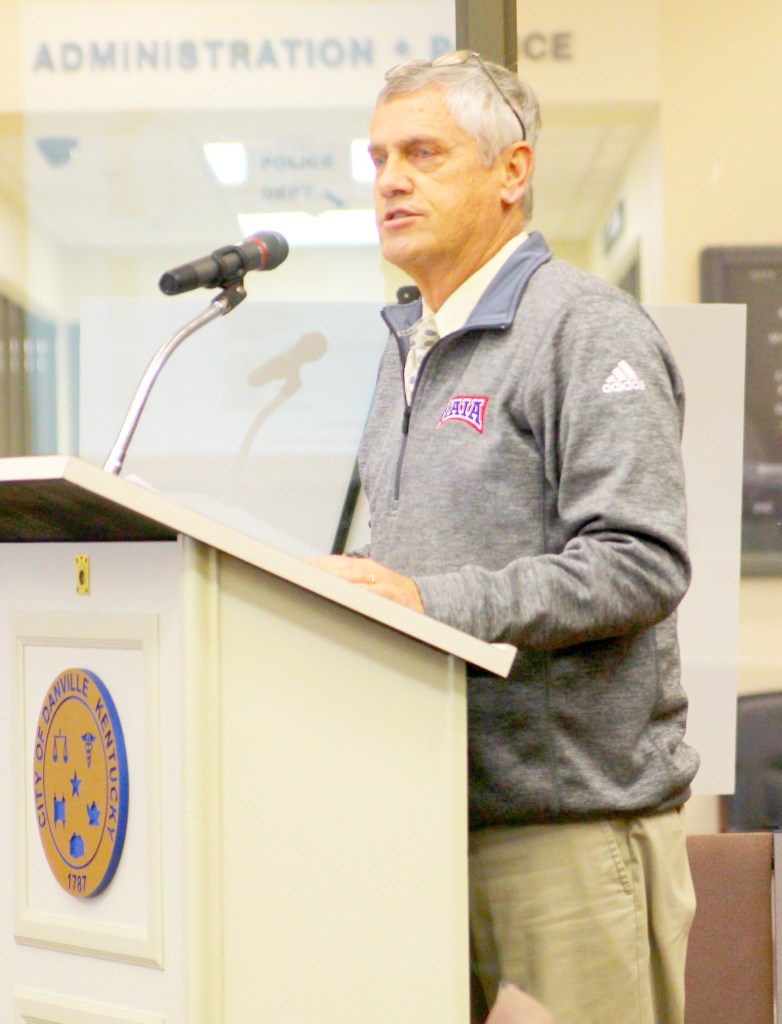 Danville-Boyle County Parks & Recreation would get $9,650 more from Danville in the coming fiscal year if the city approves the agency’s funding request.

The 2017-18 proposed budget submitted to Danville as part of the city’s annual agency funding requests process asks for $242,650; Danville provided $233,000 this fiscal year.

Parks and Recreation Director John Drake told city commissioners the additional funding for upgrades at Millennium Park that Danville and Boyle County provided in 2016-17 has had a positive effect. Both governments provided $50,000, for a total of $100,000. The use of those funds has been guided by an ad hoc committee of city, county and Parks and Recreation officials.

A new softball field, new basketball courts and new volleyball courts — which Drake said “were long overdue” — will all be ready for use this spring and summer because of that funding.

“We’re certainly pleased that the ad hoc committee and both city and county governments have decided to go forward with some of those facilities,” Drake said.

That additional funding is anticipated to continue in 2017-18, with another $100,000 total from the city and county. Officials have discussed adding another $50,000 on top of that for repaving at Millennium Park.

Among changes Drake noted in the budget for the coming year:

• Parks and Recreation hopes to hire one new full-time staff position. The agency previously had four full-time positions, but when a retirement brought it down to three, those duties were taken over by the existing staff members, Drake said. Now, as activity in and use of parks is rising, Parks and Recreation needs that fourth position back, he said.

• Parks and Recreation will rent facilities by complex rather than by field. This means, for example, that vendors such as people organizing softball tournaments will have to rent out an entire complex of four fields, rather than just two of the four fields at a complex, Drake said. That is a limitation for vendors, but “it’s a plus for the community,” he said. “It’s more efficient for us to have either a whole complex going or the whole complex not going, because then if it’s not going, we can use it for other practices we have for our local teams. If we split it, we can’t do that because then there’s a conflict between who’s going in to watch the game and who’s going in to practice.”

• Parks and Recreation expects additional revenue thanks to a team sponsorship package and a foul-pole sponsorship from Zaxby’s, which will advertise on “fowl poles” at the major league field at Millennium Park.

Danville Mayor Mike Perros asked Drake if Parks and Recreation could run its own tournaments at Millennium Park facilities, instead of renting out the facilities to vendors.

Drake said when that was tried in the past, tournaments didn’t fill up because Parks and Recreation doesn’t have the large mailing lists and connections that the vendors who put on tournaments do.

If Parks & Recreation tried to take over running tournaments, it could take “at least one full-time” position and additional support staff. It could take a while to get a program established, but it could “turn into a huge revenue source,” he said. However, Parks and Recreation would also at that point have to manage things like hiring umpires and referees and some liabilities of running tournaments that currently fall on the vendors would fall on Parks and Recreation, he noted.

“At this point, I really don’t feel like the plusses outweigh the minuses,” he said.

On the topic of further improvements to Millennium Park, Perros took issue with one item on a list of possible future improvements.

“I’m not in favor of this lake pier — I think that is a liability that is just waiting to happen,” Perros said. “How did that get on there?”

Drake said the idea is to create a pier from which handicap people could fish on the lake at Millennium Park. “It’s pretty low down on the list,” he noted.

Drake said the potential liability problems would be like any other feature added to the park — the city would have to weigh the benefit of adding a feature against the cost of insuring against injuries and problems.

Parks & Recreation was one of four joint agencies funded by Danville and Boyle County that presented their funding requests to Danville on Thursday.

The Danville-Boyle County Economic Development Partnership submitted a “continuation budget” very similar to its 2016-17 budget, because EDP leaders plan to return to the city with an updated request once development of a strategic economic development plan is completed.

The continuation budget asks for $145,000 from Danville, which is the same amount the city provided this year. That includes an increase made last year of $20,000 to fund additional travel costs for EDP President Jody Lassiter to go on market missions.

Lassiter told city commissioners the EDP used to send him on one or two marketing trips every three months, but this year that’s been “more in the neighborhood of one a month” thanks to Danville’s funding.

“So it allowed us to stretch and to actually participate in more expensive events, such as the site selectors guild,” he said.

Lassiter also noted that while Danville contributes $145,000 to the EDP’s overall budget, pass-through funding to the Heart of Danville means only $35,000 of that money goes to the EDP’s “core” economic development goals.

The Danville-Boyle County Airport Board requested $25,000 from Danville; the city gave it $15,000 this year.

Danville City Manager Ron Scott said Danville also currently pays about $9,000 for property insurance for the airport — a cost that Boyle County does not share. Scott said he thinks the county “should share in half of that insurance cost that traditionally the city has paid for a number of years.”

A story about Planning and Zoning’s funding request appeared in the weekend edition of The Advocate-Messenger on March 25-26. Visit amnews.com to read it.

Danville’s four partner agencies — Planning and Zoning; Parks and Recreation; the EDP; and the airport board — requested a total of $487,650 from the city. Danville is providing $468,000 to the four agencies this year, according to a funding request document from Danville.