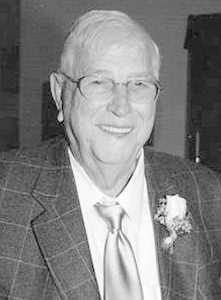 He is survived by his loving wife, Sandra “Sandy” Lunsford Harmon. He was born on March 24, 1929 in Perryville, KY to the late Ira B. Sr. and Mary Katherine Noble Harmon. IB served our country in the Air Force during the Korean Conflict.

He was an avid Kentucky Wildcats basketball fan, was a lifetime member of the American Legion, and member of the Lancaster Masonic Lodge #104. Above all, faith and serving the Lord was most important to IB. IB was a member of Pleasant Grove Christian Church. Also surviving is a son, Steele Harmon of Lexington; a daughter, Vicki Harmon Senior of Danville; a step-son, Ronnie Moberly(Clara) of Lancaster; a grandson, Ron Moberly of Lancaster; and many nieces and nephews.IB was also preceded in death by his previous wife, Francis Harmon and two sisters, Ada Harmon Owens and Betty Harmon Puckett.

Burial will be in Lancaster Cemetery.Donations in his honor can be made to The Gideons International.