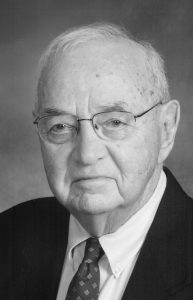 He graduated from Shelbyville High school in 1949 and entered Centre College in Danville, a member of the class of 1953. He also loved baseball, and this was proven by being drafted to play minor league baseball for the St. Louis Cardinal organization.

After graduation at Centre, he pursued his interest in football and took an assistant coaching position at powerful Danville High school. He joined the United States Navy in 1956, but returned to coaching in 1958, in a small town in West Virginia while serving in the Navy.

Marty was named head coach at Waggener High School in 1959, where he also taught English Literature IV. He was named and awarded Coach of the Year in 1963.

He left coaching for a career in corporate sales and was involved in the corporate world for over 20 years. Marty held several management positions in his sales career, including sales manager, marketing manager, and vice president of sales, at Jones-Dabney Paint, Celanese, PPG, and retiring from Lilly in 1989.

After moving to Danville, Kentucky he co-chaired a successful fundraising campaign at the Boyle County Public Library for over three years and was an active member of St. Peter & Paul Catholic Church.

Marty worked on several feasibility studies, including the Kentucky Agricultural Heritage Center and Ephraim McDowell Health Care Foundation, served as a volunteer for the surgery unit at Ephraim McDowell Regional Medical Center for 18 years and was named Volunteer of the Year 2008 by the Heart of Danville Association.

Marty was a member of the Boyle County Public Library Board. He enjoyed his book club, playing golf, traveling, and playing his dulcimer.

In addition to his parents he was predeceased by his wife, Anne Deim, and a sister, Pauline Harrod.

The funeral service will be held at 11 a.m. on Tuesday, March 28, 2017, at St. Peter & Paul Catholic Church in Danville, KY. Father Paul Prabel will officiate. Burial will be in Grove Hill Cemetery in Shelby County, KY. Visitation will be after 4 p.m., Monday, at Stith Funeral Home.

Memorial donations are suggested to the Boyle County Public Library. The online guestbook is available at www.stithfuneralhome.net.