Camp Horsin’ Around takes the reigns on emergency preparedness

These are never things anyone wants to think about, but Danville-Boyle County Emergency Management Director Mike Wilder says they are things that businesses, organizations and families need to consider and plan for. 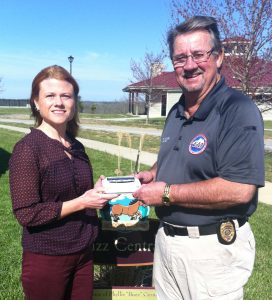 “Any organization or business that deals or has any kind of group of people, especially kids of younger age that don’t realize what an emergency situation could be, needs to have a plan,” said Wilder. “You’ve got to have something — put it in writing.”

Wilder said he was especially pleased when Camp Horsin’ Around, in western Boyle County, contacted him while in their own planning process.

The facility also has a medical center, where children receive chemotherapy can continue while at camp.

Marilyn Swinford, Camp Horsin’ Around board member and a retired emergency room nurse, was one of those leading the charge for the project, largely due to her background.

“I’ve had a lot of training regarding emergency planning,” she said.

The board wanted to “solidify” the plans everyone had in their heads on paper so they would have “consistency,” Swinford said.

“There are a lot of different organizations that are coming to camp. Everyone has their own thoughts and some may not have even considered it,” she said. “We want to make sure it’s safe for the kids, that everyone is prepared.”

Swinford was quick to point out there are no perceived threats to the children who come to Camp Horsin’ Around, but that they wanted to be prepared for any emergency that can come to mind.

They began by considering the kids, she said, the focus of the camp.

“You have to customize it for where your site is … Safety has to be paramount. Children are there for a valuable camp experience, but safety has to be first,” Swinford said.

Board members invited local emergency service personnel to the conversation — reaching out to Wilder, the Boyle County Fire Department, Boyle County EMS, Boyle County Sheriff’s Office and even the director of the Emergency department at Ephraim McDowell Regional Medical Center.

“We needed those relationships,” Swinford said, explaining some emergencies might require transporting one of their children there for special care.

Swinford said they looked at every potential risk they had, starting with basic first aid and beyond, planning for severe weather, fires, evacuation and more — everything to keep the kids safe, she said.

“I can’t say enough about the communication and cooperation we had with the folks from Boyle County Emergency Services,” she said. “We spent several hours over a working lunch (going over the plan).”

They offered recommendations, she said, such as keeping a solid register of the children at the camp each week, in case of the need to evacuate.

“The camp plan is really comprehensive, and involves a map,” Swinford said. “It’s a very nice plan built on some very good national models … a guideline to prepare ourselves for the ‘What if’ and hopefully the ‘What if’ never happens.”

The next step, Swinford said, will be to train others.

“Once you find out the biggest risks and set up the plan, everyone has to be trained on the plan,” she said.

The are a limited number of full-time employees at the camp, but some seasonal workers and many volunteers — all of whom will have to be trained, Swinford said.

Wilder, who was part of the group that met to review Camp Horsin’ Around’s plan, said it was “just super.” He said he and other emergency services directors would be happy to sit down with any community agency, as they did with the camp, to establish an action plan.

Reiterating Swinford’s point, Wilder said the plans have to be “tailored specifically to the group or organization” that will be implementing them.

“Identify all the potential hazards that you may have,” he said. “It can be very simple, and in most cases it is.”

Wilder said it’s important for families to have their own plans, too, so that children know what to do in emergencies.

“Always be prepared. Unfortunately, we’ve been so lackadaisical in the last few years, because we haven’t had anything,” he said. “All it takes is one incident.”

Visit kyem.ky.gov for more information on tips and sample plans for preparing for specific emergencies. To get help establishing or reviewing a plan, call Mike Wilder, Danville-Boyle County Emergency Management director,  at (859) 238-1109.