Photo submitted The Kentucky qualifiers to the national speech and debate tournament.

Kentucky’s best high school speech and debate students went head to head at Centre College March 17 and 18 at the annual Kentucky District Tournament of the National Speech and Debate Association.  Students competed in eight speech and five debate categories for the right to represent the Commonwealth at the Grand Nationals, the largest academic contest in the world, in Birmingham in June.  Students competed in as many as five preliminary rounds before advancing to the finals with the top two entries in each event moving on to NSDA Nationals, a contest dating back to 1931 that features students from Maine to Guam competing for college scholarships and the national titles.   Additionally, on Friday, the Congressional Debate events (House and Senate) were hosted by the Danville campus of Bluegrass Community and Technical College (BCTC). 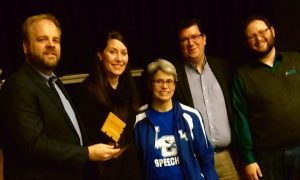 Alison Lundergan Grimes, a former high school speech and debate competitor for Lexington Catholic High School and the current Secretary of State for Kentucky, was named the Kentucky District Communicator of the Year.  She gave a rousing speech in support of communication to the assembled students, judges, and coaches to start off the awards ceremony.  Woody Zorn, a Trinity High School graduate who serves as Assumption High School’s debate coach, was awarded the District’s Alumnus of the Year honor in recognition of his support of debate throughout the state.

Photo submitted
The Kentucky qualifiers to the national speech and debate tournament.