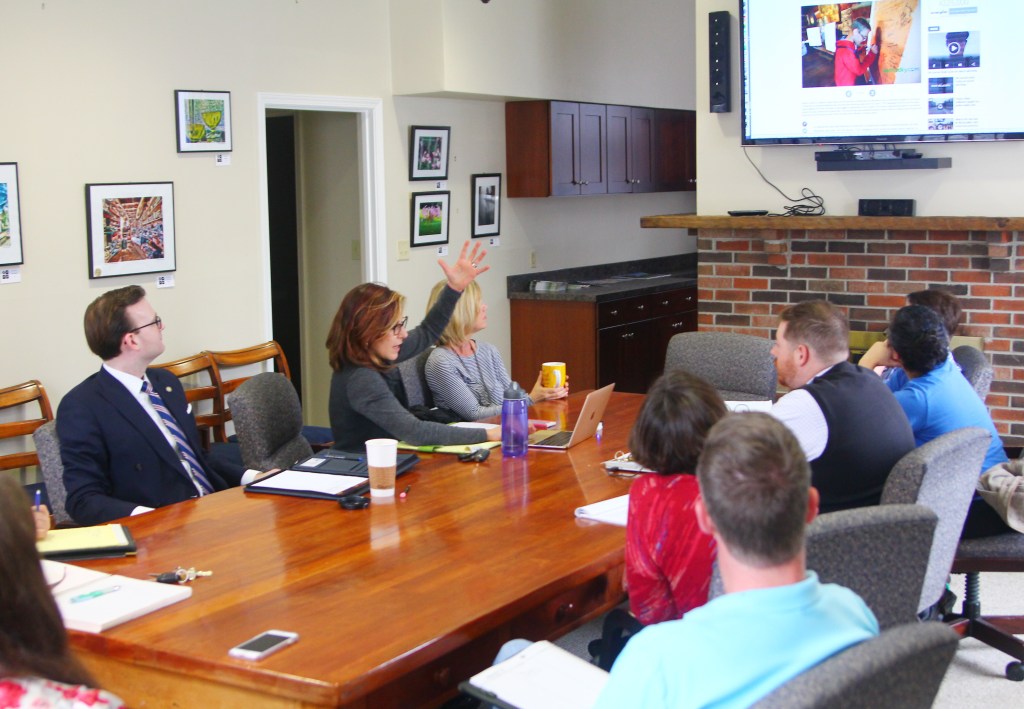 Ben Kleppinger/ben.kleppinger@amnews.com Jennifer Kirchner, center, leads a planning meeting for a celebration of Kentucky’s 225th anniversary at Constitution Square in Danville on June 1.

Planning for Kentucky’s birthday party at Constitution Square began Tuesday with a brainstorming session for community leaders from many different organizations and groups.

Danville has celebrated the anniversary of Kentucky’s founding on June 1 for the past two years. The celebration is held at Constitution Square, where founders first met to begin hashing out the state’s Constitution. This year could be an extra-special event because it’s the 225th anniversary and the state is on-board to promote it as a “kick-off” for statewide events celebrating the milestone.

“We’re hoping to get the governor and all those elected folks down … but I also anticipate people just visiting and being here from Kentucky, if not for the 225, they’re also going to be coming for Brass Band,” said Jennifer Kirchner, director of the Convention and Visitors Bureau, who is spearheading the celebration plans. “We’re going to get a lot of statewide coverage, maybe even national coverage from it, hopefully.”

Ideas kicked around during Tuesday’s meeting include:

• offering a scavenger hunt of some kind, perhaps involving clues that participants would get from re-enactors or other people at the event;

• using Constitution Square as a starting point for a historical walking tour;

• having elected local and state officials give toasts;

• serving cupcakes and sodas; and

• providing a brochure or online information pointing people to the many other things going on around Danville, including events that are part of the Great American Brass Band Festival, which begins on the same day.

Kirchner said it would be great to have a brass band performing during the celebration, but it wasn’t immediately clear if that would be possible or what bands could be available.

Nikki Kinkade, executive director of the Brass Band Festival, said bookings with brass bands for the festival are made well in advance and at this point none of those schedules could be changed to get a band into Danville by Thursday morning, in time for a mid-day performance at Constitution Square. It can also be difficult for bands to be available on Thursdays because many members also work other jobs, she added.

Kirchner plans to look into what options might be available as the planning continues.

Planners also discussed the possibility of creating a more general promotion to get people to spend a weekend in Danville, even if it’s not during the 225th celebration.

Something making the planning effort easier is that “there are so many things that are already in place that are happening,” Kirchner said.

“I don’t want to take away from any of that, I just want to drive people to it,” she said. “While this seems like it’s a big deal, I think in reality, there’s a lot of it that’s already playing out. It’s just a matter of how are we going to bring it together to provide a full experience?”

Kirchner said the goal is to create an experience that anyone could come to Danville and enjoy.

“It’s a lot of little things, so that if you come here with your family or if you’re a retiree or if you’re a teenager, there’s different things that you could go do to spend the day in Danville.”

If you’re interested in participating in the planning for the 225th anniversary celebration or have an idea you’d like to share, call the Convention and Visitors Bureau at (859) 236-7794 or email jennifer@betterindanville.com.

Danville will fund master parks plan on its own