Boyle County Fiscal Court is looking into getting a new health care provider for  the jail in the coming fiscal year. Magistrates approved Tuesday a request for companies to submit proposals for providing health care.

The current health care provider, CorrectHealth, has told jail officials it will not continue to provide coverage unless it’s paid to provide 24/7 service — an increase in cost estimated at almost $200,000.

Jailer Barry Harmon said Tuesday that CorrectHealth is willing to finish out its current contract, which runs through June 30. But it will only submit a bid for the next fiscal year if the request is for 24/7 coverage.

Harmon told magistrates it seems “all the providers are pretty much” switching to requiring 24/7 medical coverage for “liability” reasons.

Magistrate Phil Sammons said he’s not in favor of expanding medical coverage at the jail. He asked Harmon if it was possible to have CorrectHealth cut back on the hours of coverage instead of expanding.

“He said he would not cut them,” Harmon said.

“Well, is there another company out there we can look at to give us the service? That’s what we need to be looking at,” Sammons said. “… Me personally, I don’t think we need to have doctors and nurses sitting there all the time babysitting these people that don’t even need the medical care that we’re providing.”

Harmon said there are liabilities that fall on the jail for the prisoners it holds.

“Understand — I’ve got 40 percent of my population (with) mental health (issues). … Understand — we detox people 24/7,” he said. “Right now, I have five on detox. And I’ve got three cells for that on a slab. And we deal with medical — we’re one of the most unhealthy jails that CorrectHealth has. We’re second from the bottom. It’s our population.”

Harmon said he expects companies “will respond quickly” to the request for proposals.

Magistrates also discussed whether the county could take advantage of home incarceration in order to house fewer prisoners, who would not create medical costs for the county while not in the jail. 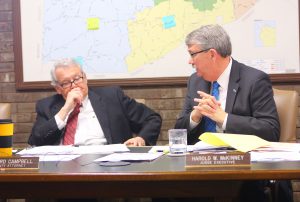 Boyle County Attorney Richard Campbell said the courts lost the ability to use GPS monitoring for home incarceration when Kentucky Alternative Programs was phased out of use earlier this year. Officials are working on a plan with a third-party company to provide monitoring, but it’s not a program that would significantly affect the numbers of prisoners in the jail, especially since a large majority of the jail’s population cannot afford to pay the monitoring costs for home incarceration.

“We have one guy right now who has a DUI third offense and has considerable time to serve … his health is not such that we do not want him in our jail,” Campbell said. “He does have the wherewithal to pay for the home incarceration with the ankle bracelet, and that’s what we’re going to do once we have this in place. And there will be a few others like that.”

Sammons referred back to Harmon’s earlier statistic that about 40 percent of the jail’s population suffer from mental health issues.

“40 percent of his people have mental problems. … Why not really look at those, to go along with what you’re saying, and send those people home with ankle bracelets?”

“Well, if they’re mentally retarded, they don’t need to be in jail; they need help,” Sammons said.

After some crosstalk, Judge-Executive Harold McKinney quieted those gathered and Campbell responded further.

“Here’s the problem — they might have mental illness but they’re not incompetent to the extent that they are absolved of their crimes. Some of them are very serious crimes, and typically connected with it is a substance abuse problem,” Campbell said. “… Probably 99 percent of the people he’s talking about don’t have the wherewithal to pay for it themselves.”

“The risk you run if we start picking up the cost is you’ll have 400 in your jail and 4,000 out of your jail — I’m overstating that a little bit,” McKinney said. “We’ve got be very careful when we start down that road of paying for home incarceration. Am I wrong Barry?”

“No, you’re not wrong,” Harmon responded.

The Boyle-Mercer Joint Jail Committee may address the health care issue further at its next meeting on April 7. The Boyle County Fiscal Court will meet again on April 11.