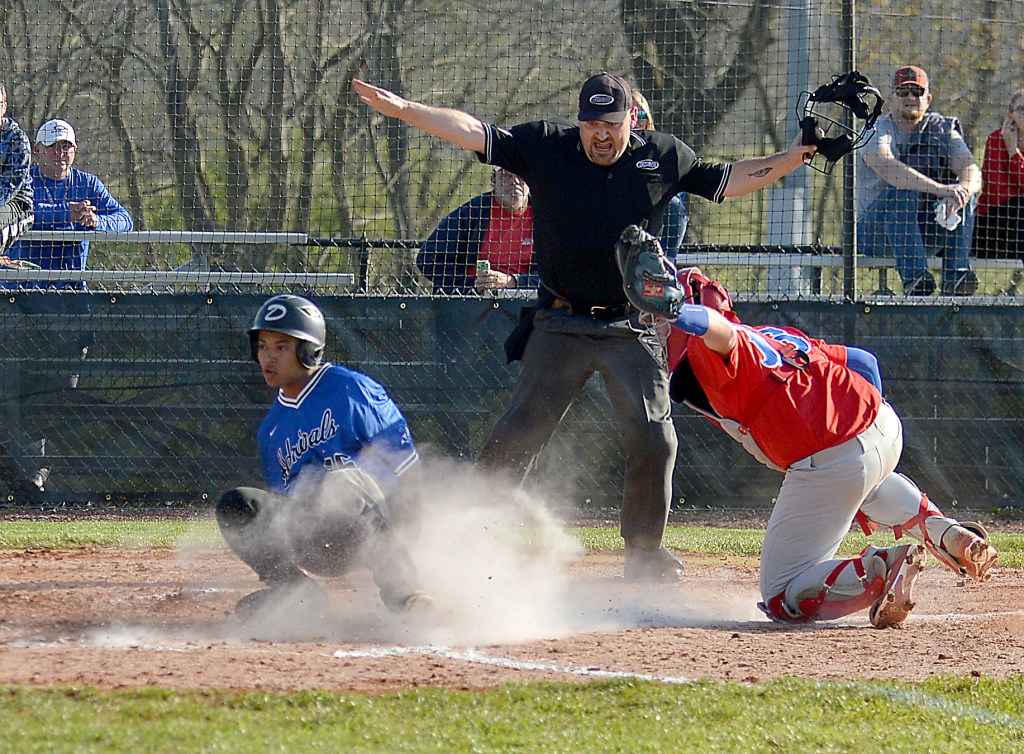 Among the list of things hanging in the Danville baseball dugout Wednesday night was a message written in large letters, reminding the Admirals players of the importance of getting Lincoln County starter Noah Horton out of the game. It was listed as the “key to the game.”

It took longer than the Ads hoped, but once they finally got Horton off the mound, they took advantage. A massive sixth inning turned a hole into a lead and Danville won the first 45th District game of the season 8-5 over the Patriots.

Horton held the Ads in check for the first five innings, giving away three runs on seven hits and three walks, but he walked the first batter of the sixth and Pats coach Tee Ellis pulled him in favor of their No. 2 pitcher, Jared Long.

From there, Danville pounded out five hits and drew two more walks to post five runs in the sixth, taking a 5-3 deficit and making it an 8-5 lead.

“We’ve been preaching all year, and it’s one thing I’ve been happy with this group, is the old saying, it’s a sprint not a marathon, and that’s how you kind of have to approach baseball,” Morse said. “We have a slogan this year of anchoring down, and that’s winning the sixth and seventh innings. It’s trying to start strong at the beginning and to finish strong at the end, and this team has done that.”

Ellis took the blame after the loss, saying he’d like to have some of his pitch calls back.

“I made some bad pitching calls and they hit them, they’re a good team,” Ellis said. “We also made some defensive blunders. Focus every pitch, every pitch can be hit to you. … It seems like we couldn’t stop it when it started. That’s mostly my fault, maybe I should have made some better pitch calls, might have been a different outcome.”

Mason Schroeder got the scoring started in the sixth, hitting a single to bring home pinch-runner Dmauriae VanCleave from second base. Schroeder went to second on the throw, and two batters later, Brian Baxa’s check swing turned into a single between first and second and Schroeder scored the tying run.

Jacob Crank came around for the winning run on a throwing error, and Ellison Stanfield’s double, his fourth hit of the day, brought courtesy runner Tanner Ford in from second. Stanfield scored the final tally on Alex Venables’ single.

“This is the smallest roster I’ve ever had,” Morse said. “… We started an eighth grader at second tonight because we had a kid in a car wreck, we’ve got sickness, guys hurt, guys who quit. It’s got to be a team deal. … Everybody’s got to be ready. In that inning we scored the runs, we used two or three guys to pinch run, two or three guys to pinch hit. Everybody has a role.”

Long had a much better evening at the plate, going 2-for-3 with two runs and an RBI. His solo home run opened the sixth inning, giving the Pats their 5-3 lead.

Stanfield went 4-for-4 while Crank and Baxa each had two hits. VanCleave scored three times with three stolen bases, all as a pinch runner. He now has 18 stolen bases this season.

Baxa got the complete game win, striking out 13 batters and giving up three earned runs on six hits and three walks.

After getting out of the sixth inning, the senior right hander had 105 pitches and was done for the day in Morse’s book; Zach Dampier had warmed up and was ready to enter in the seventh. But when Schroeder scored the tying run and Crank waited on third, Baxa approached Morse and said he was ready to throw the final inning.

Baxa used nine pitches to sit down the Pats on a groundout, strikeout and flyout.

“He said he wanted the ball, he said, ‘I’m going back out, right?’ So when a senior comes to with that kind of emotion and really wants it, he’s a big strong kid and got himself in good shape this winter, he was coming out until he said that,” Morse said. “I told him if anybody gets on, you’re done. But I think he threw stronger in the seventh inning than he did in any other inning.

“He struck the second guy out and had a fist pump on the mound; it’s the first time I’ve ever seen emotion from him on the mound. I’ve been trying to get it from him for four years. He was excited.”

The win snapped a two-game losing streak for the Ads, who stand at 6-3. They’ll play three game this weekend at the Green County Wooden Bat Classic.

This was Lincoln’s first loss in five games this season and the first time the Pats scored fewer than eight runs in a game under first-year coach Ellis.

The Pats went down 1-0 after VanCleave scored in the first inning, but they responded with three runs on two Danville errors to take a 3-1 lead in the third. They added another in the fourth when Joshua Caudill’s sacrifice fly drove in Long for a 4-1 lead.

Dampier scored on Bric Mongeau’s double in the fourth, and the Ads got one more back in the fifth when Stanfield drove in VanCleave with a single.

And while he said the Pats didn’t play their cleanest game, Ellis was happy how his team performed through the first five-and-a-half innings.

“They came out and fought hard the first five innings, they played good baseball,” Ellis said. “We didn’t play the best, we threw some balls away. … If we go in 4-0, 5-0 it might be a different game for (Danville), their heads are down more. But we did some good things early, especially against a good pitcher. We’ve got to capitalize on balls hit at us, routine plays.”

The Pats return to their home diamond with games against Madison Central tonight and Bourbon County on Friday.