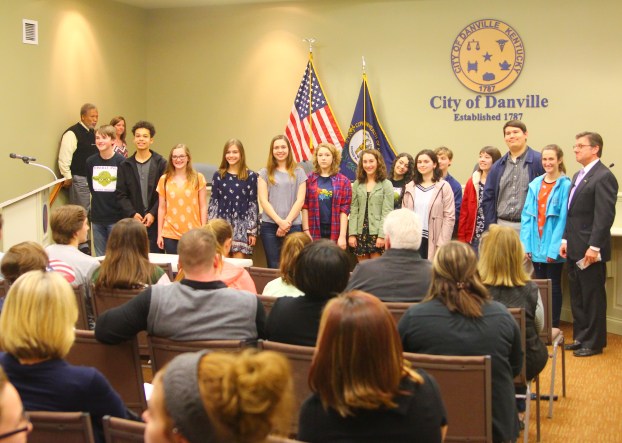 Ben Kleppinger/ben.kleppinger@amnews.com Members of Danville High School’s Forensics team pose for a photo with members of the Danville City Commission Monday night. Parents of the students helped pack the commission chambers for the event.

Danville High School’s forensics team got some local love from the Danville City Commission this week for an “outstanding year.”

Commissioners unanimously approved a proclamation signed by Mayor Mike Perros commending the state championship team for many accomplishments, including:

• a “clean sweep” of Kentucky’s four state speech tournaments for the third time in school history;

• being the only school in the state to have ever completed a “clean sweep;”

• having three Danville High School students qualify for the National Speech and Debate Association’s tournament, “the largest academic contest in the world;”

• winning the state speech tournament for the second straight year; and

• a 21st straight win of the annual national qualifier for Grand Nationals.

“The team players are outstanding role models to the youth of Danville and Boyle County,” Perros said, reading from the proclamation. “All of the members are to be applauded for their exemplary attitude and contributions to education.”

Perros said the forensics team members are “shining examples of focus and dedication.” 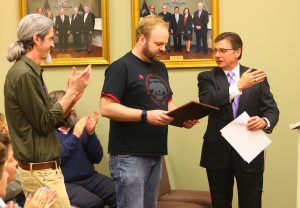 “The work of these students is exceptional, but it also should be noted that the leadership provided to these students — critique and so forth — comes from the staff of the Danville Schools,” Superintendent Keith Look said. “… This was fantastic — it’s a clean sweep. To be the only school in the state ever to do this and the fact that we’ve done this now three times definitely sets the bar (for) others to chase.”

Team members who qualified for the national competition in June are Grace Sheene, Charlie Hall and Abigail Anderson.

SO YOU KNOW To donate “a chair” by giving $25 to the Boyle County Senior Citizens Center, visit www.afunplaceforseniors.org. The... read more