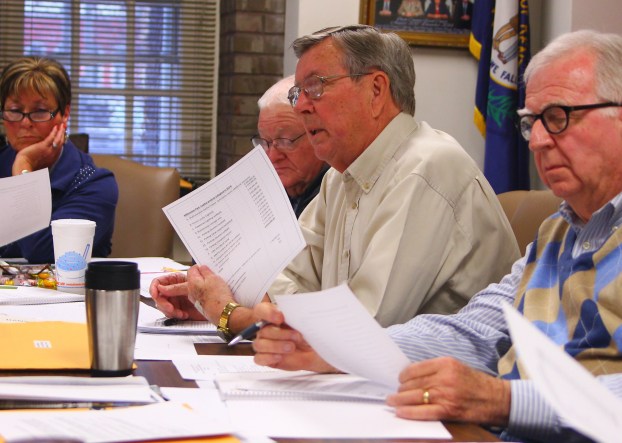 File photo by Ben Kleppinger Boyle County Magistrate Jack Hendricks, center, seen here at a February fiscal court meeting, says he would like representatives for the Danville and Boyle County to be involved in the process of finding the next director for Danville-Boyle County Planning and Zoning.

A Boyle County magistrate has joined a Danville city commissioner in calling for the city and county to be more involved in the hiring of the next director of Planning and Zoning.

“I think somewhere along the line … we need to have representation on that hiring board from the court and the city on Paula (Bary)’s replacement,” Magistrate Jack Hendricks said this week. “Mainly because we fund it, mainly, so we should have some representation there.”

Hendricks said he would like one representative from the county and one from the city to be involved with Danville-Boyle County Planning and Zoning’s personnel committee, which is in charge of recommending the next director.

Bary is set to retire at the end of June. She was first hired as P&Z director in September 1994.

City Councilwoman Denise Terry said last week she would like Danville to have a representative on the personnel committee. Terry said she would also like to see the new director hired to work a five-day work week instead of the current four days — a sentiment Hendricks also echoed this week.

“Most managers work 40 hour weeks and they’re there five days a week. I’ve never heard of managers working 32 hours and being paid overtime and hourly rates and all that sort of thing,” Hendricks said. “I think this is a prime opportunity to suggest to the board that maybe they change that to where the manager is going to be there five days a week.”

Boyle County Judge-Executive Harold McKinney said he would contact the members of the Planning and Zoning Commission who have been appointed by Boyle County and schedule a time for them to talk with the fiscal court.

“I’ll get our appointees, I’ll get them in here and we’ll make our feelings known,” McKinney said.

Danville City Manager Ron Scott told city commission members last week he would look into the possibility of city and county representation in the selection process with City Attorney Stephen Dexter and report back.

The director position is currently being hired as a four-day-a-week position with a salary of approximately $55,000. Leber has said the personnel committee has “several resumés” from a national search and the deadline for resumés to be submitted was March 10.

Danville High School’s forensics team got some local love from the Danville City Commission this week for an “outstanding year.” Commissioners... read more