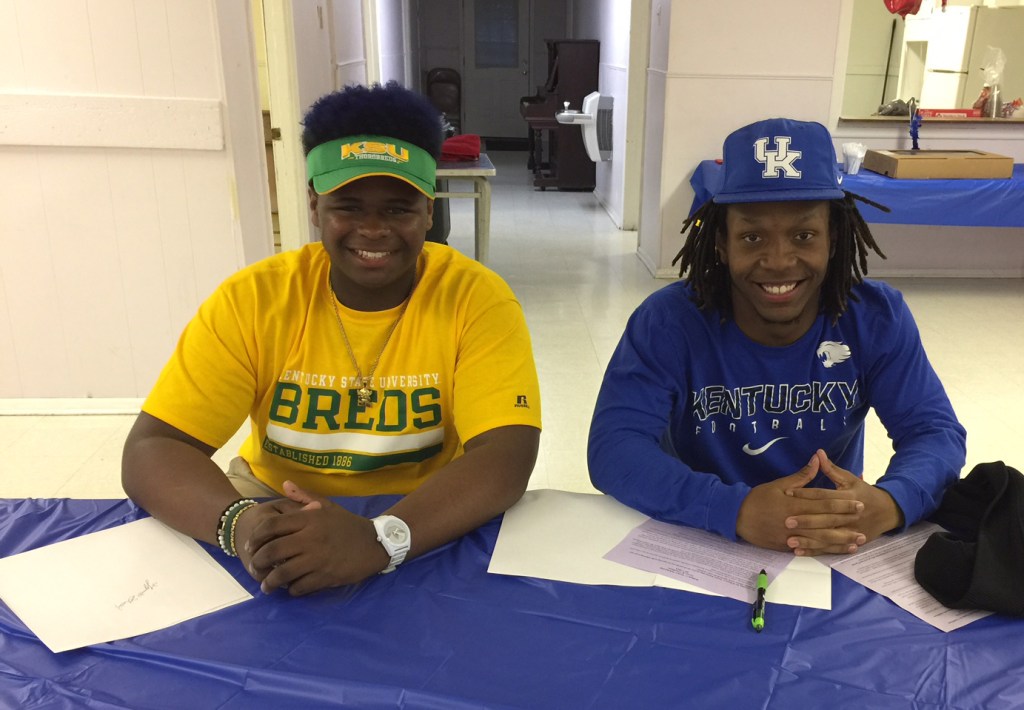 D Smith has a list of goals he’s set for himself on the wall of his bedroom. There’s only one item left, but he’s well on his way to marking that one off as well.

Smith recently announced he will attend the University of Kentucky to play football as a preferred walk on with the Wildcats.

“I really want to thank God for blessing me with these opportunities,” Smith said in an email. “Without Him none of this is possible. I love football and it’s a true blessing that He’s gifted me in something I love so much the way He has. Everything I do is to glorify Him and bring people closer to him. TDs stop but God’s love never ends and that needs to be shared more.”

Smith made his decision public Friday, along with teammate Tyus Short, who chose Kentucky State, an NCAA Division II school, over West Virginia State and other smaller Kentucky schools.

“Kentucky State showed the most interest in me,” Short said in an email. “I like the environment, and they have the majors that I plan on pursuing. They also gave me a full ride and I have a lot of connections there. My family loves the school as well so it just felt like the best fit for me.

“It wasn’t very difficult at all to choose where I went. Kentucky State stood out more than the other schools that were recruiting me. It’s a relief to not have to worry about where I am going to go to school.”

Smith chose UK over Centre College and the University of Louisville, which came into the process after his senior season. He chose UK because of that list of goals on his wall.

“Honestly I wanted no regrets,” he said. “I have completed everyone of (my goals) that I need to accomplish in high school except get a D1 football full scholarship, and that is what I am in pursuit of.

“My academic scholarships allowed me to be able to take this route and pursuit of what I want to do most.”

While UK had been in contact with Smith, who rushed for 790 yards and 12 touchdowns as a senior, Louisville was a later addition to the decision. While he was blown away by the facilities and staff at Louisville, “the bond I had made over two years with UK just couldn’t be made up in that short time for Louisville.”

Short will play fullback and defensive line for the Thoroughbreds, and the coaches have told him he stands a chance of getting plenty of playing time as a freshman.

According to Smith, the offensive coaches at UK have told him next spring is when he’ll get a chance to perform at running back. This year, he hopes to make an impact and see time on special teams.

While Smith’s skills and speed were apparent to anyone who watched a Mercer game over the last four years, his size also drew some attention. At 5-foot-6, Smith was one of the shorter players on the field.

Yet this, too, played a role in his decision to attend UK.

“Since I don’t have the frame that everyone wants I’m overlooked a lot,” Smith said. “It’s put a different level of hunger in me. I want this thing bad. I pour my heart into this, and my thing is I want to show kids in our community that everything is possible. Don’t think any goal is too big because no one even thought I’d be in this situation. I still have a lot to do, but I’m happy where I am.”