New schools named, all school mascots to be Admirals 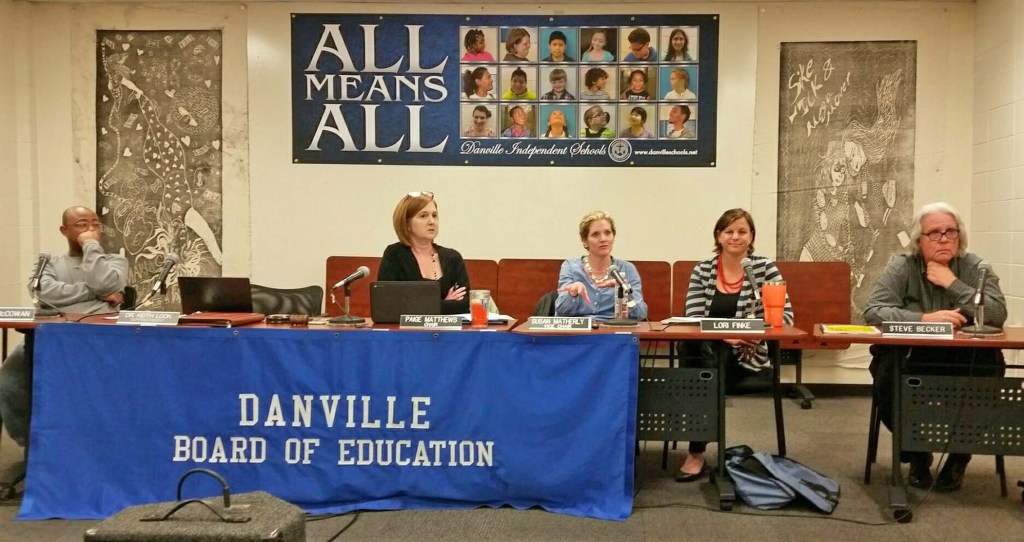 The Edna L. Toliver Elementary School and Mary G. Hogsett Elementary School will maintain portions of their names after the Danville Independent Schools redesign project is complete, and all Danville schools will share the Admiral mascot and colors.

Those are just a few of the questions, out of a list of 20, answered by the Danville Board of Education on Tuesday night. The questions and their answers are posted on the district’s website and will be sent out to parents within the week.

“Personally, I like that it’s going to be Toliver and Hogsett,” said Board member Lori Finke.

The official answer relates to the district’s desire to maintain the historical aspect of the names and to honor the women after whom the schools are named.

“Current building names and their tribute to powerful women in the history of Danville Schools’ education will be maintained,” the document reads.

Board members expressed a desire to also maintain the name of “Jennie Rogers” on the current Jennie Rogers Elementary School, which is planned to become the district’s “central office and more.”

“I think we have over 100 years of school tradition in this community. We’re always changing the scheme of education and I do feel like we need to leave the names as constant,” said Board member Steve Becker, citing the changing mascots, colors and more over the years.

“I agree. These were named after women who were thought of very highly. I think we’d be doing a disservice to them to take the name off,” said Board Chairwoman Paige Matthews. “I think we’re pretty much all in agreement.”

Uniting all of the district schools, even Bate Middle School, under the same colors and mascot will strengthen the district, said board members.

“It brings us all together as one,” said Board member Troy McCowan.

Currently, Toliver is the only school that has an additional color — green — compared to the others of being just blue and white. Each elementary school has a mascot: Toliver St. Bernards, Hogsett Dolphins and the Jennie Rogers Cougars; while Bate Middle School’s mascot is the Bate Bulldog, harkening back to the school’s history as Bate High School.

Board members feel that keeping the names, but changing the mascots is a good balance.

Other big decisions included the Hogsett and Toliver Site-Based Decision-Making councils. The schools are being considered “new schools” by the Kentucky Department of Education, and the district can’t institute school councils until after the schools have been occupied. The nominations for the councils will be conducted no later than November, with the council being voted no later than December.

Some questioned if the decisions should be made earlier in the year, or later, on the April/May cycle that site based councils typically use.

“This gives us time to do everything, time to come together as a school, have all of those ‘get to know you’ activities … We’re coming together as a community,” said Leo Labrillazo, principal of Hogsett Elementary School.

The other two district elementary school principals — Ron Ballard of Toliver and Robin Kelly of Jennie Rogers — agreed. Kelly said later in the year would be a bad plan, because it would force the councils to be setting their bylaws at the same time they are trying to make other crucial decisions regarding school staffing.

“I don’t think (setting bylaws) is something we need to be rushing through. I would rather we do that in the middle of the year,” Kelly said.

The Board of Education also established that there would be no uniforms for the 2018-2019 school year, the first year of the integration, which will mark the first time Toliver has been uniform-free since the 1997-1998 school year.

The reason for the decision is to allow the site-based councils to make a permanent decision for their respective schools.

Principal Ballard defended the uniform policy at the school, which has “grown and been changed over the past 20 years,” he said. Ballard agreed that he didn’t think the board should “impose on the parents of the other two schools what the policy currently is.”

Board members considered doing that — forcing the new Toliver students to abide by the existing uniform dress code, but Finke said they felt that would be “a lot of money misspent” if the school’s council voted to not have uniforms the next year.

Finke, who has children who currently attend Toliver, said she was a fan of the uniforms.

“I didn’t think I would be,” she said. “It creates a good unity in the Toliver kids.”

Board member Susan Matherly agreed, but also said it would be a “hardship” to add during the ongoing transition period.

Some crowd members expressed concerns that removing the uniforms would ultimately be the end of the uniforms completely, because they would likely not be voted back in.

Board members all said they want uniforms to be considered later, because they liked the policy at Toliver.

“I do think, considering uniforms that is something that we probably need to talk about. it truly does establish an equal playing field. Most folks, wealthy or not, will go to Walmart and buy those slacks and shirts. you pretty much know they will remain the same,” said Becker. “I would love to see uniforms in the middle school.”

Becker said he used to dislike the idea of uniforms, because he went through a Catholic school system, but that the uniform dress code at Toliver “is pretty liberal,” calling it more of a “form of dress” code.

Principals Labrillazo and Kelly said they liked the uniforms. Kelly told the board that she felt it should be something that the district decided, not the school councils, because she felt uniforms either needed to be at all schools or at none of the schools.

“I ask that you look at it as a district … preschool through seniors,” she said.

While board members agreed they would love to see it at least through middle school, many felt it might not be possible at the high school level.

“We would get a lot of push back,” said McCowan.

The board also decided the principals of the new Toliver Intermediate School and the new Hogsett Primary School will be named by Nov. 30.

Tours will begin of the new portion of the Toliver Elementary School in April. Students will be in the new section after they return from spring break, which is next week.

The complete list of questions and answers pertaining to the redesign project can be viewed online at http://www.danvilleschools.net/district_information/danville_schools_2-5_education_center.

Tours will begin of the new portion of the Toliver Elementary School in April. Visit www.danvilleschools.net for more information on those or call the district’s central office at (859) 238-1300.