Heart of Danville board members push for relaxed design guidelines 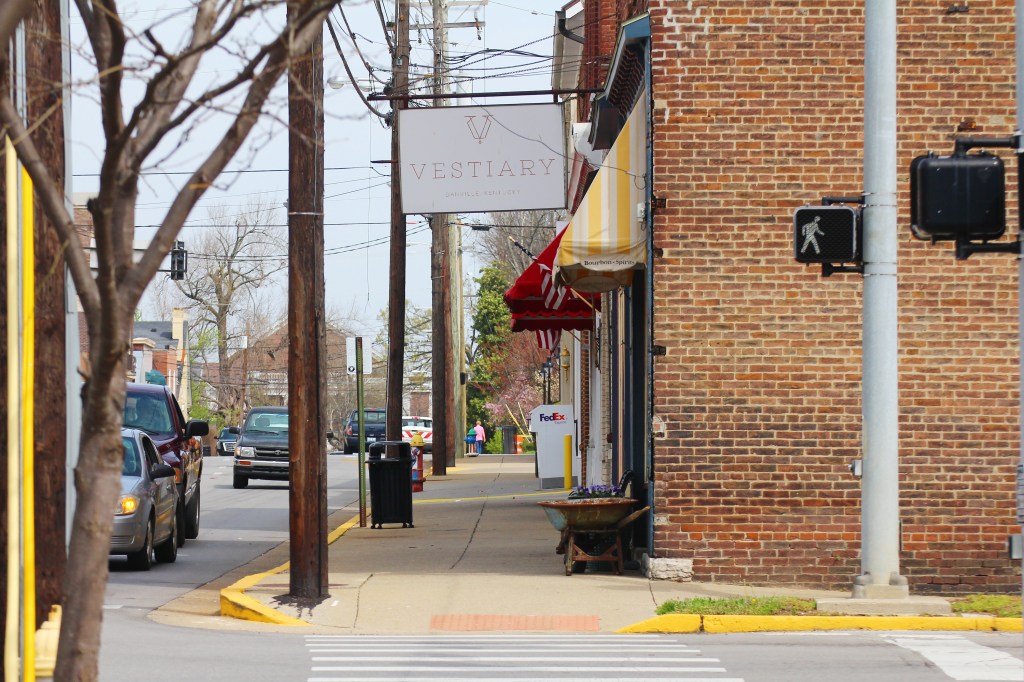 Ben Kleppinger/ben.kleppinger@amnews.com Some downtown Danville leaders in the Heart of Danville would like to see rules loosened for signage and wall murals at businesses in the historic district of downtown Danville.

Overhauling Danville’s historic district design guidelines just to make them more understandable would not be enough for some downtown leaders. They are pushing for a relaxation of rules about what they can and can’t do with their buildings, which they view as overbearing and stringent. 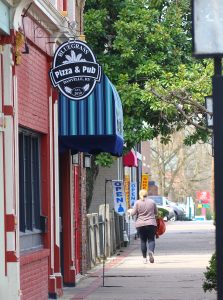 Ben Kleppinger/ben.kleppinger@amnews.com
Some downtown Danville leaders in the Heart of Danville would like to see rules loosened for signage and wall murals at businesses in the historic district of downtown Danville.

Time is a limited commodity for the Architectural Heritage Board’s update process — a final product must be completed (though not approved) by the end of June. A first draft of proposed updates for for Danville’s historic district design guidelines is due in a matter of weeks, meaning now is the time to speak up, said Mary Robin Spoonamore, the leader of the Heart of Danville’s Design Committee.

Spoonamore and others say the current design guidelines for downtown Danville are overly restrictive and prevent a lot of creative ideas that businesses want to do.

Heart of Danville Director Nick Wade said one example is when the owners of Plank on Main wanted to paint a huge “Plank on Main” mural on the back of their building, they couldn’t.

“The heritage board could not allow it because it’s a sign and signs can only be so many dimensions,” Wade said.

In an online discussion group concerning the design guidelines update process, Spoonamore, who owns Jane Barleycorn’s Market and Bar on South Fourth Street, said she would like to see guidelines that would allow businesses such as hers to have “semi-alfresco” dining, with seating in front of a business and a table and open window built into the storefront. Such a feature would not be currently allowed, she said. 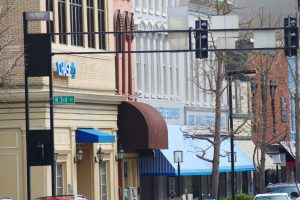 Ben Kleppinger/ben.kleppinger@amnews.com
Some downtown Danville leaders in the Heart of Danville would like to see rules loosened for signage and wall murals at businesses in the historic district of downtown Danville.

The Architectural Heritage Board has also been reticent to approve wall murals because the guidelines effectively have a blanket ban on painting on brick facades, Spoonamore said Thursday. There are specific kinds of bricks from certain time periods that can be harmed and begin to crumble if they are painted on, but other kinds of bricks are not harmed by paint, she explained. Not that there aren’t other issues to be considered — the guidelines should allow the AHB to consider what happens to murals or modifications when one business leaves and another comes into a space, or what happens to a mural after 10 years if paint begins to peel, she said.

“So there’s lots of issues to look at … all the way through,” Spoonamore said. “The main thing, I think, is the guidelines are written to where the people on the AHB would say that they don’t have the freedom to say yes right now, because they’re like judges and they have to follow the guidelines.”

Kate Snyder, a Heart of Danville board member and associate director for the Community Arts Center, said it would make sense to write the guidelines in order to accommodate such differences as types of bricks.

“Rather than saying, ‘you can’t paint on brick because it’s not good for it,’ (a new guideline) would say, ‘if the type of brick in the building would be damaged by painting on it, don’t do it,’” Snyder said. “There’s a difference in phrasing that makes a huge difference in interpretation.”

The consulting company hired to coordinate the guideline update process, Cultural Resource Analysts, recently completed new guidelines for Frankfort, which have been held up as an example of what Danville’s could look like.

While Frankfort’s new guidelines do “read very well,” Spoonamore said she doesn’t think they provide the freedom that Danville business owners are looking for.

“The Frankfort ones I didn’t think opened a lot of doors from what we have now,” she said.

Spoonamore has suggested a tiered system of guidelines for different kinds of buildings as a way to protect important buildings while allowing businesses more freedom in less important ones.

The McDowell House, for example, should be “ultra-protected, because that is part of our history and who we are,” she said.

“However, if you acquire a building that is not historically significant or whose architectural elements are more limited, then you should have more leeway in what you can do, because why are we protecting them?” she said. “I just don’t think that they all should be treated the same.”

Some Heart of Danville Board members said there are problems with interpretation of the current guidelines as well.

“We had a … partially rejected mural because they weren’t sure that the shade of red we had picked was the color that they liked best,” Snyder said. “Like, come on.”

Some agreed Thursday that it seems the AHB interprets the guidelines in an exclusionary manner, where it assumes everything is not allowed unless it’s spelled out in the guidelines that something is allowed. Others disagreed and said it seems like some members of the AHB want to allow changes but can’t because of the current guidelines.

Heart of Danville board member Logan Germann said the AHB blames Planning and Zoning’s sign ordinance, but “in the historical overlay district, there are special different sign (guidelines) that in my understanding, were drafted by (AHB) and sent to P&Z for incorporation, and then P&Z sent the whole thing up to the city commission to be passed as an ordinance.”

“(AHB) seems to be saying that this is P&Z’s ball, but last time we went through it, I thought (AHB) said, ‘this is what we want the regulations to be in the downtown overlay district,’” Germann said.

“What doesn’t jive with me is signs are historical. We have had signs all over the history of this country and if you look at old pictures, there are signs everywhere,” Germann continued. “If they don’t want signs downtown, that’s fine, but don’t say it’s because of historical reasons.”

Cultural Resource Analysts has been retained by Danville for an estimated $16,351 to coordinate the creation of updated design guidelines for the city’s historic districts. The project is funded in part by a $10,800 grant from the Kentucky Heritage Council. A stipulation of that grant is that CRA’s final product — a set of design guidelines that could be adopted by Danville — must be completed by June 30.

Alan Higgins with CRA has said previously he intends to have a draft of the new guidelines ready in April, at which point there would be a 30-day review period for the AHB, the Kentucky Heritage Council and the public. After a final set of guidelines are produced, they would still have to be approved and could still be further modified.

CRA has created a Facebook group concerning the drafting of new historic design guidelines, where members of the public can add their input. The public group can be joined by anyone and is named “Danville Design Guidelines Update.”