Tennis making a comeback with parks and rec board

In an effort to grow the sport of tennis through the Danville-Boyle County Parks and Recreation department, the board gave approval to a plan to offer tennis camps, clinics and leagues.

“It would have cost about $1,500; this will cost a few hundred more,” said John Drake, director of Danville-Boyle County Parks and Recreation. “We might generate some money.”

“We are trying to get tennis back as a park and rec activity, which we haven’t for several years,” he said.

Board member Heather Wheeler said it would expand the sport across generations, as well.

Drake also told the board about the potential for the agency to be audited, because they were out of compliance regarding documentation with the Department of Local Government.

A mix-up led to the error, he said, which was overlooked during the transition from the previous administrative assistant to Amber Shartzer, the current one. It was resolved within a day.

“We are in compliance … But now we’re on the list and we could be audited,” Drake said.

He also said there were rumors that the changes going on with the Wilderness Trace YMCA would impact the parks and rec department’s summer camps, which is not the case.

The board discussed how the warm temperatures would probably have people wanting the pool at the Bunny Davis Center to be open early. There are no plans to do that.

There are some cracks to be repaired, but nothing like last year, which required outside help.

Another repair to be made at the center is the purchase of new flooring for one of the exercise areas downstairs.

“We need to decide which areas are priority needs for the Bunny Davis Center and which are not … Function has been reduced to what it is.” Drake said. “This is an area, irregardless of the function of the facility — we have problems with the mats that are there. It is an old area, a musty area.”

“We want to err on the side of safety and put this surface down.”

The flooring, which works like puzzle pieces and can be moved, will cost an estimated $2,058. Before installing, Drake said, they will have the area inspected to see if they need to put another sealer down, to decrease moisture getting into the area.

“It’s not getting as much usage, but we want it to be safe usage,” said Rodger Ross. “This is not a luxury.”

The board also discussed the idea of banning some of the larger coolers at Millennium Park on the weekends, to help deter from anyone bringing alcohol in, which is not allowed.

“If we say no coolers, we’re doing a disservice to people,” said Ross. “We do have a concession, and ours are reasonably priced … It’s not much more than you’d pay at the BP station.”

Wheeler said she did not agree with a cooler ban.

Wheeler explained that she takes a rolling cooler, not only for storing the cooled items, but because it makes it easier to carry it in.

“If you start getting dimensional, I think you’re going to have problems,” Wheeler said. “This is my experience and opinion; other people obviously have others and we can disagree on that.”

They talked about inspecting coolers, which Wheeler said she would agree with.

Drake said they could monitor the situation and if it became a bigger issue later, it could always be revisited. 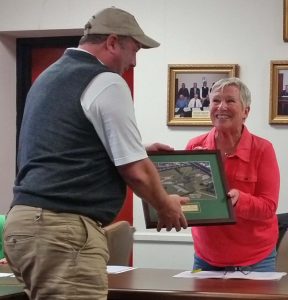 Kendra Peek/kendra.peek@amnews.com
Rodger Ross, chairperson, give Faith Atmore a photo of Millennium Park with a plaque recognizing her service on the Danville-Boyle County Parks and Recreation Board.

Also, Board member Faith Atmore was recognized for her 10 years on the board. She is leaving the board, to be replaced by Lafonda Stallworth.

To register for the tennis programs or any of the programs offered by Danville-Boyle County Parks and Recreation, visit the Bunny Davis Center at 110 Man O War Drive in Danville, or call the center at (859) 238-1233.