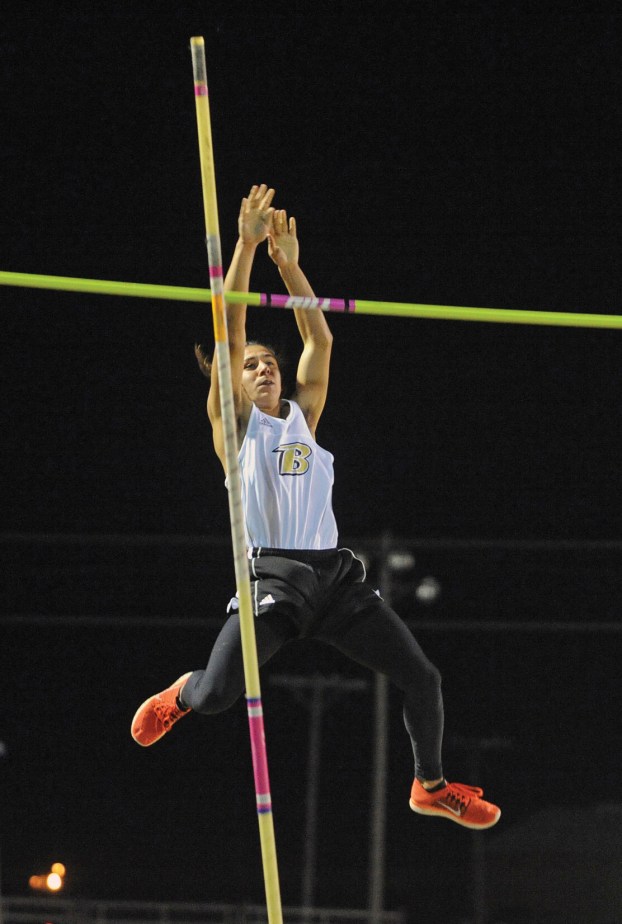 You need to be a little crazy to pole vault.

That’s a large part why Boyle County pole vaulters have succeeded so far this season.

Derek Bernard said he jumped off of the roof to his house when he was seven years old. He said he’s always been an “accident-prone” child, so overcoming any mental barrier with pole vaulting wasn’t an issue.

“I’ve always been like the ‘accident-prone’ child in my family, I get hurt all the time,” he said. “I’ve been to the ER like six times … I just like doing stuff like free running. I just love doing that stuff, gymnastic kind of things. I just don’t have a lot of fear when it comes to those physical things. It helps whenever you’re faced with a huge pole that might shoot you the other way.” 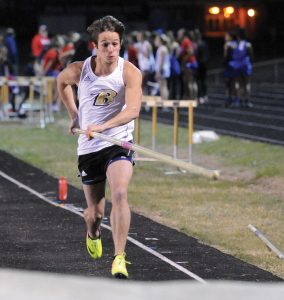 Bernard and Gary Wood are two of the top pole vaulters in the state, and it’s in large part due to vaulting coach Damian Laymon.

“I started coaching three years ago; I coached at Mercer County for five years, shot put and discus,” Laymon said. “(Boyle County coach Brent) Wagner asked me to come out and help (Boyle) throwers coach (Billy) Moore, because he’s got a crazy schedule and can only be there some of the time. Last year, his schedule kind of leveled out so he was able to be there.

“Wagner asked me to take over pole vault. I had never done pole vault before, never participated, coaching, anything like that. But I enjoy learning new things so I decided to take it on. Last year, me and our vaulters really kind of learned everything together. We learned proper form, we learned safety, learned how to hold a pole. We all learned that with one another. Last year was a lot of trial and error.”

All of that trial and error helped Boyle to first-place finishes for Wood and Haley Bates in the region meet last year. Bates graduated, but last year set the tone for a strong start to this season. Ashley Smith and Ashton Cox are two vaulters who Laymon expects to challenge for points at the state meet.

Bernard and Cox were two of Laymon’s ‘recruits’ this season after last year’s strong start.

“Pole vault is one of those events where there are free points out there just waiting to be gotten because it’s a very tough event,” he said. “There’s not as much competition because it’s so difficult to do. I just kind of really picked and chose students that I thought would be good athletes and brought them in and said, Hey, let’s play off of your strength.”

Strength is exactly what helped Bernard to start so well. The team was in the weight room doing pull-ups and Laymon recounted Bernard’s official start to vaulting.

“I said, ‘Now the goal is to throw your feet up in the air and get your feet above head,’” Laymon remembers. “You won’t do it the first time, but try it.

“Derek jumped up there and without even trying to swing back, he was strong enough to basically lift his body upside down. It was not a momentum thing, it was a strength thing. At that point, Gary and I looked at him and said, ‘You’re a pole vaulter, you’ve got no choice.’”

Laymon pulled out the pole vaulting equipment on the first day of February, and by March 4, Bernard hit 13 feet in practice.

The school record is 14 feet, one inch.

“My goal this season is to actually break the school record,” Bernard said. “It’s not an exceptional record, and I’ve gotten thirteen feet, just my first month of vaulting. I plan on going to camps over the summer, but I’d like to see myself at the end of the season breaking the school record.”

Wood told Wagner last year that he wanted to break the school record.

“The way he said it, it was like he was saying it’s only a matter of time,” Wagner said.

The friendly rivalry between Bernard and Wood has been a major boost, Wood said.

Despite Bernard’s success so far this season, Laymon said he still needs consistency.

“Derek is still really green, he’s not consistent a lot of the time,” he said. “Gary will get 12, 12-6, 13 feet on his first or second attempt. A lot of times, it takes Derek till his third attempt to get it, just because he’s still learning how to move. But it’s there.”

Wood transferred from Danville last year and wanted to swim — that’s what most of his family is known for — but had to sit out a year, so he said he decided to try track.

“I wasn’t very fast so they decided to put me in pole vault, and I thought it sounded interesting,” he said. “When we started jumping, I just thought it was fun just to fall. I felt like, the higher I got, the more fun it was. Once I realized I was pretty good at it, it just made me want to be better.”

That background in swimming has helped Wood tremendously in vaulting.

“When people ask what I do to stay in shape, swimming is always the answer,” Wood said. “Coach John (Anderson) at Danville really brought me up from where I was when I started in eighth grade. I was skinny, I wasn’t very strong. But my muscles got bigger and my core got a whole lot stronger because in swimming, you have to use your entire body. I feel like that really helped me grow and be the pole vaulter I am today, because a lot of the guys that jump aren’t strong upper body, they are strong in the legs. With swimming it gives you both, and I think that really helped to bring me where I am today.”

Bernard didn’t have the swimming background, but he said he’s always been active. He’s been in the marching band for five years, which he said is great core exercise. He’s been on the track team for four years and plays pickup basketball and soccer games all the time, he said.

“Bernard is a huge surprise this year,” Wagner said. “He’s been on the team for years, just never really found his niche. He’s obviously found it and he’s killing it.”

Laymon said he expects both to challenge each other for the region title and should compete for points at the state meet.

“This year, both Gary and Derek right now are, I believe, tied for fourth in the state, and so definitely we want to see our goal for both of those guys is to place at state,” Laymon said. “For the girls, it’s a little bit more difficult because of the strength requirements, but I feel we can place in state with the girls as well. That’s really the ultimate goal, to win region. I’d love to sweep region and move on to state. I think we have a shot for several of our athletes to do well at region and also potentially place well at state.”

“Coach Laymon has done an outstanding job with our vaulters. … He’s great at breaking it all down and focusing on fundamentals,” Wagner said. “He also holds them accountable and doesn’t sugarcoat anything for them. He’s a huge asset to Boyle County track and field.”

The vaulters love it so much that Wagner has a hard time getting them away from practice.

“You have to pry both of them off the pole vault runway,” he said. “Basically make them go home.”