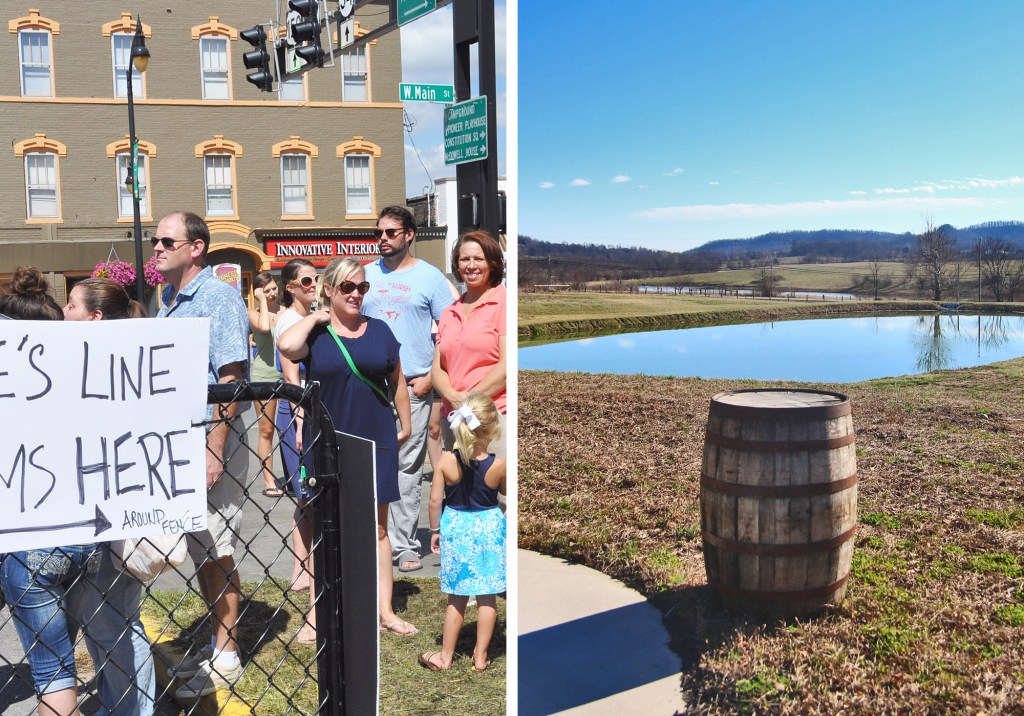 Photos by Robin Hart and Amanda Wheeler The Kentucky State BBQ Festival, which has been held at Constitution Square, at left, in Danville for the last six years, will move to Wilderness Trail Distillery, at right, for this year's festival.

The Kentucky State BBQ Festival is moving from historic Constitution Square in downtown Danville to farmland owned by Wilderness Trail Distillery on the edge of town.

Festival organizer Brad Simmons confirmed the plan to move has been finalized.

“We loved being downtown — loved it, loved it,” Simmons said. “But we think this is going to have more opportunity for fun things for people.”

Wilderness Trail Distillery purchased about 13 acres of land adjacent to its 21-acre Lebanon Road location in January, with plans to use the land as an outdoor events venue.

The space at distillery is much larger than what the BBQ festival had available at Constitution Square — Simmons guesstimated there could be 10 times as much space available. The festival needs that space if it’s going to continue to expand at the rate it has over its first six years, Simmons said.

The festival has regularly attracted tens of thousands of people to downtown Danville. Simmons said it’s impossible to offer specific numbers on attendance, but organizers have guessed that 20,000 attended in the first year and attendance has increased by 10-20 percent every year since. This year will be the seventh annual festival.

In July of 2016, festival organizers approached Danville about expanding the festival from Constitution Square onto Main Street in order to accommodate its growing populations of vendors, attractions and attendees. But Danville Police Chief Tony Gray said the request was denied, citing the need for more support from businesses along Main Street.

Jennifer Kirchner, director of the Convention and Visitors Bureau, said when organizers told her they were relocating, “my first reaction was, honestly, just to be sad.”

“I do feel like it’s a bit of a loss for downtown, but I see why they want to do it and it’s good to see it at another tourism partner at the distillery,” she said. “Ultimately, I think it’s the right move and I understand it.”

“They’ve struggled for a while with wanting to be downtown and people not wanting them to be downtown, so it will be interesting to see (how people react),” she added.

Danville Mayor Mike Perros said Friday he believes the move will be a net positive for the festival and he doesn’t expect “a lot of negative reaction” from downtown folks.

“From the retailers that I have spoken with over the last few years, the BBQ festival did not bring any noticeable increase in business to them,” Perros said. “I’m certain there are some that did (benefit), but for the ones that I talked to, it was not meaningful.”

Perros called the move to Wilderness Trail “a significant plus for the community.”

“In order for that festival to be all it can be, it needed to be moved,” he said. “… With Wilderness Trail expanding their footprint and their business model, I think this is a perfect opportunity for the distillery, the BBQ festival — which ultimately benefits the United Way — and it should be a larger benefit for the community of Danville because the festival can attract more people.”

Perros said traffic will be an issue that officials and festival organizers must deal with at the new location. A hill along Lebanon Road to the west of Wilderness Trail poses a problem because “cars can top that hill at a pretty good rate of speed” and come up quickly on the distillery entrance, where lines of cars may be waiting to enter, he said.

“This new venue will pose some significant challenges for the city in terms of traffic — safe traffic control,” he said. “And I’m sure it will require some assistance from the county, as well as possibly even the state Department of Transportation. But we’re committed to doing all we can to ensure that increased traffic is handled safely.”

Simmons said even though Wilderness Trail is on the edge of Danville City Limits in a more rural area, it features a lot of the same things that Constitution Square has — “beautiful trees,” “quaint buildings” and history, to name a few.

“We think it has all the same charm as downtown,” he said. “Plus on top of that, we have the distillery. It’s really fantastic.”

Simmons said the infrastructure needed to pull off such a big event is not a concern.

“Wilderness Trail Distillery has really stepped up and offered to help with whatever we need,” he said.”

Shane Baker, co-owner of Wilderness Trail, said the change is “a great opportunity not only for us, but also the BBQ festival.”

The distillery bought the 13-acre property next door “with the intentions of allowing the community to take advantage of that space while we build out,” he said.

The distillery is in the process of surveying its new land and having engineers determine where good locations for roads and buildings would be. Those plans will hopefully come before the Danville-Boyle County Planning and Zoning Commission soon, Baker said.

The distillery will be open for visitors to tour during the festival.

“It’s going to be a crazy year getting ready for it,” Baker said. “It was opportunistic for everyone involved, so we’ve just got to get to work to make sure it’s successful.”

Myrna Miller, a BBQ festival board member, said the festival will still feature celebrity pit masters, music, food, beer, bourbon and fun events, but there will also be more parking and room for expansion.

Simmons said he thinks people will need “to book their hotel early” if they’re planning to visit Danville for the festival. In previous years, some people have stayed at hotels in Nicholasville and Lexington because the local hotels filled up. The continued growth of the festival won’t help that situation.

“If that’s the case and now we have 10 times the space, then we can have more people,” he said. “I don’t know how many people we can have, but I’m going to try my darnedest to get them in here.”

The Kentucky State BBQ Festival is a non-profit organization that donates the majority of its funds to the Heart of the Kentucky United Way. Since it’s inception, the festival has contributed a total of $136,896 to the United Way. It has also donated $7,800 to the Constitution Square Park Endowment Fund. This year’s festival will be held Sept. 8-10.