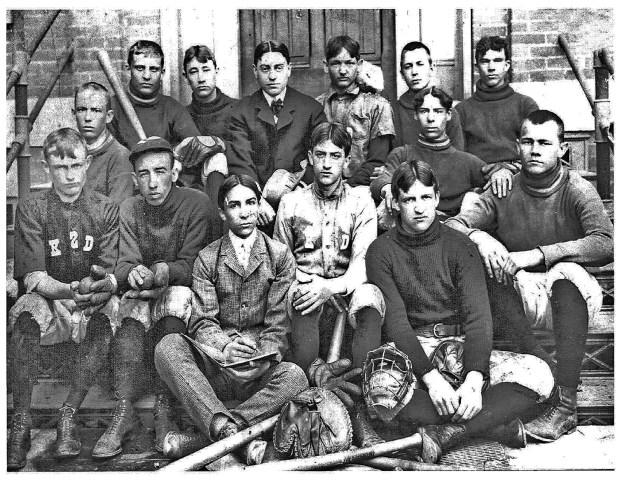 This photograph of the KSD Baseball Club in 1902 is the earliest known photograph of students and coaches. The Baseball Club scheduled games with clubs and teams in town and at Centre Preparatory. As a KSD student and baseball enthusiast, Max Marcosson managed KSD’s teams before he graduated in 1890. After graduating from Gallaudet College (1895) and teaching at the North Dakota School for the Deaf (1895-98), Marcosson returned to KSD in 1898 as a teacher and again managed the boys’ baseball club. First Row (legs crossed): Kutzleb (scorer), Worthington (sub). Second Row: Castle (pitcher), Taylor (shortstop), Buchert (pitcher), West (sub), Noll (sub). Third Row: Jasper (center field) Hartman ( third base), Miller (right field), Marcosson (manager), Duflot (second base and captain), McIntosh (left field, Bruce (first base).

Looking Back at KSD

We had a big snow here last week and when it was time for the boys to go to the gymnasium to practice basketball one boy got several snowballs and put one in almost everyone’s tennis shoes, who were late to come in the gym. Sissy Dick got two snowballs in both of his shoes. Well, that night at bedtime, after the lights were all out, I got a snowball and put it in Ben Williams’ bed to get even with him. When he crawled in bed and lay down, he jumped out quick and said it felt like a cold rat.

— John Ray Williams, From the Boys’ Side

There will be a game of baseball between Centre College and the town nine of Danville sometime in April. Two or three of our boys will be in the game as the town team has not got enough good players. They say they will be glad to have our assistance. We have two teams to play ball. The teams will begin playing ball about the middle of the month, probably the 16th of April…

Our boys have already collected about $10 as a baseball fund and with it they will get their own supplies. Supt. Argo says the Institution will furnish baseball uniforms and he will have our ground graded and fixed up in fine style. He also says that he will have the carpenter boys build a grandstand so that our visitors can “take it easy” when they want to go to see a game of baseball.

— From the Boys’ Side Reporter Robert Zahn

A regular blizzard set in Monday last accompanied by the heaviest snow of the season. Locomotion was both dangerous and difficult in the face of the blinding wind and snow. Winter may be dead, according to the almanac, but he has shown himself to be a pretty lively corpse…

The weather has been warm and bright for a week or two past and the boys and girls have been spending much time out of doors. It was such a relief to get out, after having been cooped up so long by the bad weather we have had the past winter.

The pleasant weather of last week caused the baseball fans to get out balls and bats and start practice in earnest. The prospects for a strong team this season are excellent, and a good schedule with preparatory school teams has been arranged. The latest game to be secured is one with the Sue Bennett Memorial School at London, to be played either April 14th or 21st.

Sunday was Berenice Pollock’s birthday. Her aunt in Germantown sent her a big cake. Her mother sent her some money for ice cream. All of those things were addressed to Miss Joiner who kept them until Sunday afternoon when she called Berenice and all of her classmates to the little girls’ cottage. Everyone was curious to know what Miss Joiner wanted with them. We were taken to her office and to our surprise, found a large cake with 18 candles burning. Berenice had a surprise birthday party and cake, ice cream, salted peanuts and candy were served. After enjoying a delightful hour, we thanked Berenice for her nice treat and wished her many more bright and happy birthdays.

The weatherman has been hard on us the past few weeks and we have had snow storms, rain storms, hail storms and blizzards, and it was shivering cold. We had another dose of “beautiful snow” the latter part of last week and the first of this week. The weather man doesn’t seem to realize when folks have had enough. What do you think of the changeable weather?

Thomas Simpson and John Cahill went cocoon (not coon) hunting last Sunday. They found 35 cocoons. They put them in a box and will save them until warm weather comes to see what kind of butterflies come out of them.

By JERRY SAMPSON Question: Dear Mr. Sampson, my daughter said to contact you as you’d know how to help and... read more