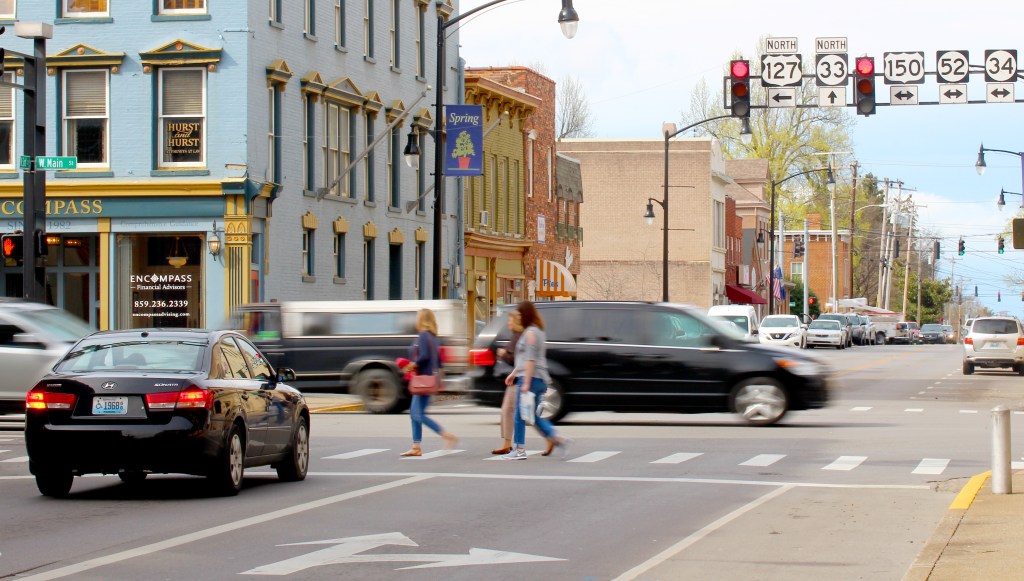 Walk before you run

Taking on downtown Danville on foot isn’t as safe as it could be, but the Heart of Danville is beginning to work on a pedestrian plan for the core of the city that could help make things better.

The Heart’s Design Committee met with Police Chief Tony Gray back in February to learn about the difficulties police face in keeping downtown safe for pedestrians. Heart officials and other members of the community attended a “walkability webinar” in March to educate themselves on how other communities have worked to improve walkability between residential and commercial areas. And in late March, Heart of Danville Director Nick Wade told his board the Heart hopes to develop a pedestrian plan that could be brought to Danville City Commission for approval.

“The pedestrian plan is not an easy project by any means,” Wade said during a Design Committee meeting in March.

It will require research, lots of data collection and an engineer to help.

“It’s a lot of red tape, but I think that the city would appreciate the fact if the Heart took this on, because no one else is really doing it and it is consistently a conversation that we’re having,” Wade said.

The data that is already available on pedestrian safety in downtown Danville suggests there’s room for improvement.

From 2013 to 2016, there were 30 “sidewalk fall” incidents in downtown Danville, according to a grant application from the City of Danville, which is seeking close to $1 million in funding for a streetscape project that would improve walkways between Second and Fourth streets.

“Since 2013, the City of Danville has paid over $51,000 in settlement claims from sidewalk falls and additional claims are still pending and have not yet been paid,” the application reads. “In addition to the obvious safety concern presented by these claims, the financial burden to the city and increases in liability insurance costs further dictate a dire need to ensure that all sidewalks and crosswalks are safe and devoid of trip hazards.”

The same application also cites the fact that five people have been struck by cars in the area since 2014.

Mary Robin Spoonamore, who owns Jane Barleycorn’s Bar and Market on South Fourth Street and chairs the Heart’s Design Committee, said the intersection of Fourth and Walnut outside her business is “terrible” for pedestrians. People who don’t live or work in downtown Danville might not realize it, but for those who are downtown frequently, they “are frighteningly aware of how dangerous this intersection is,” she said.

“Everyone in Danville knows it’s safer to jaywalk than to mind the (crosswalks),” she said.

Downtown Danville resident Jane Brantley said she sees dangerous situations downtown frequently — she felt concerned enough to tell Danville commissioners in March that it’s an issue they should be looking into. 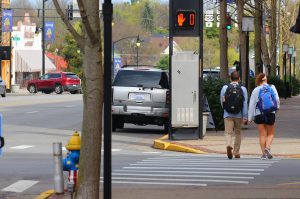 Ben Kleppinger/ben.kleppinger@amnews.com
Two people finish crossing the street at the intersection of Main and Third Street as the timer on a pedestrian crossing sign expires.

“I walk downtown a lot — I live downtown,” she said. “I’m constantly watching people run the light at Fourth and Main and at Third and Main. I know that we’ve had pedestrian accidents.”

The streetscape grant that Danville is seeking would help address some safety issues in the Main Street area, by adding improvements such as ADA-compliant ramps at each crosswalk, upgraded road markings and improved traffic signals.

As for the Heart’s role in creating a pedestrian plan, such a project might include something like a “heat map,” which would use data to reveal where pedestrian traffic is the heaviest, so that improvements could be focused on the most-used areas. That’s a possibility discussed during March’s walkability webinar.

The project could propose ways to add or improve sidewalks and paths to make it easier for people to get from their neighborhoods to downtown without driving.

It could also propose strategies for how traffic flow could be improved, identify sidewalks that are in need of repair and suggest other infrastructure changes.

One popular idea mentioned in many conversations over the past two months is the addition of sidewalk “bump-outs,” which can have a positive impact on visibility for vehicles and pedestrians.

“When you look at the intersection of Fourth and Walnut, the buildings are so close to the sidewalks that there’s not a good line of sight for a car at the intersection. And that’s a pretty consistent problem throughout the entire downtown,” Wade said in February. “… A bump-out gets the pedestrian further in front of the car at the crosswalk to create a better line of sight between the car and the pedestrian.”

The Heart of Danville plans to team up with others in the community who are also interested in downtown safety, such as the Chamber of Commerce and the Safe Communities Coalition, to work on the pedestrian plan.

City Commissioner Rick Serres said during the walkability webinar in March that he sees a lot of potential for cooperation to address the safety issues downtown.

Perhaps another effort running parallel to all this is the city’s plan to hire a consultant for a signage and way finding master plan. Commissioners approved a fee of about $27,000 for the consultant at the end of March.

“The goal is to maximize and minimize at the same time,” City Engineer Earl Coffey said at the time. “Maximize information while minimizing the sign clutter that’s out there, so that you do have effective way finding, effective directional information provided to pedestrians, vehicles, all around town, regardless of the entry point.”

One of the first steps in developing a pedestrian plan may be a pedestrian safety awareness event that the Heart of Danville is planning.

“We have to get people talking about this,” Spoonamore said. “If we do a pedestrian awareness event, we have to really think about how to more forcefully say, ‘this is what we want.’”

The awareness event could include dozens or even hundreds of volunteers walking around downtown Danville conducting “walkability audits” and identifying problems they run into. Wade said AARP provides the walkability audit tool for different groups to use.

“I think that would be a really interesting thing for us to do and it would be easy for us to pull off, just to get a sort of general idea of what the public feels is an issue,” he said. “The more conversations we have with the public and the more ideas, the better idea we have of what they’re looking for.”

Wade said he wants the pedestrian plan project to signal that the Heart of Danville is taking action to improve downtown.

“I think that we’re showing that we are becoming a very proactive organization and trying to stay ahead of the issues that are coming, instead of a reactive organization that’s dealing with issues after they have already happened,” he said.