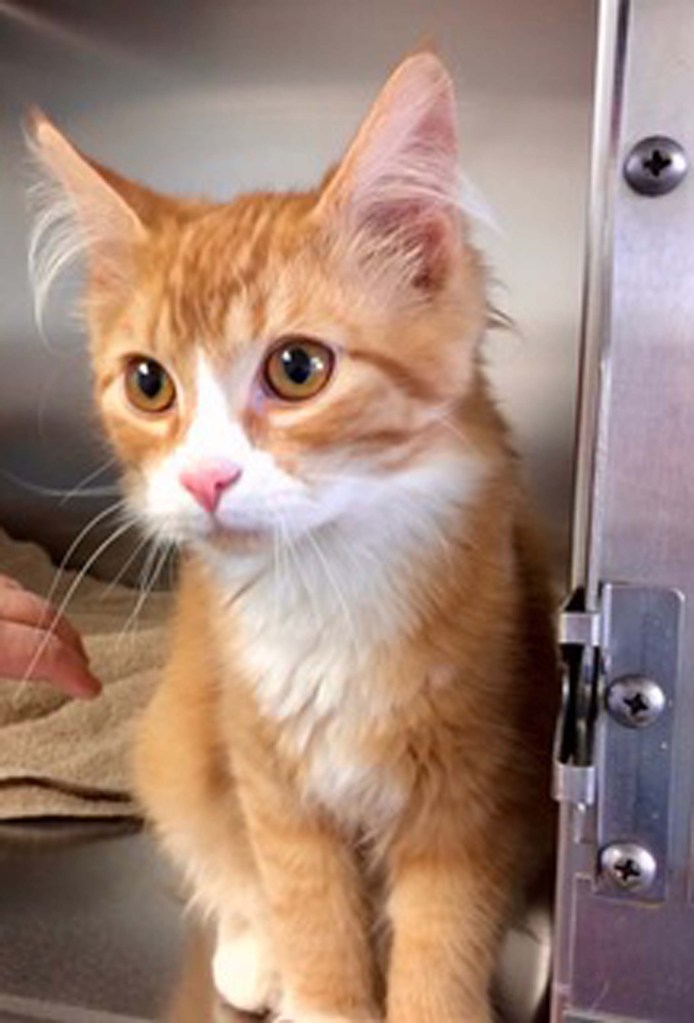 Photo submitted Hammy, a four month old orange tabby, was the 12,000 animal to receive surgery at the Happy Paws spay and neuter clinic in Danville.

An orange tabby with white stripes, known as Hammy, stole the hearts of volunteers and the honor of being the 12,000 customer at the Happy Paws Spay and Neuter Clinic in early March.

“He was so cute,” said Clinic Director Katie Turbyfill. “He meowed all day long — he was very vocal.”

Hammy, owned by Emily Neikirk of Danville, was brought to the clinic with his brother, also a kitten.

It’s an important milestone for the clinic, which has been open for almost 10 years; it will celebrate an anniversary this October, Turbyfill said.

Happy Paws Spay and Neuter Clinic is operated by the Danville-Boyle County Humane Society. It’s a low-cost clinic, for families receiving public assistance, or with low or fixed incomes. 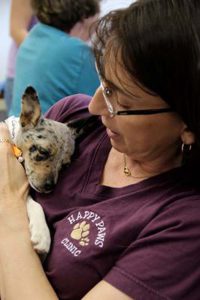 Photo courtesy of the Danville-Boyle County Humane Society
Katie Turbyfill, director of the Happy Paws Spay and Neuter Clinic, holds a dog at the clinic.

“A lot of people do have pets and they can’t afford regular vet care. We want to cut down on the animals that come into the shelter — that’s our mission,” said Turbyfill. “You can’t adopt or rescue your way out of the problem of unwanted animals.”

She has been involved with the clinic since its inception, first working as co-director with Kathy Nelsen, who later became the director of the humane society, while Turbyfill took over the clinic.

She said it wouldn’t be possible without the volunteers. There are about 16 who come into the clinic and a few more who work outside, booking appointments, washing laundry and a treasurer who balances the books.

“We have really good volunteers. Everybody has learned their jobs — we all know our jobs really well,” Turbyfill said. “We’re not vets or vet techs, but we all have our jobs.”

There are also volunteers who bring food to the clinic each week, which she called a “great service.”

There is a vet, Malinda Ferrell, and a vet tech who come to the clinic each week. They are the only paid employees, Turbyfill said. Ferrell also works at the low-cost spay and neuter clinic in Harrodsburg, Critters Without Litters. 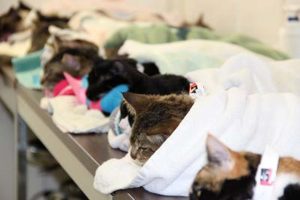 That clinic, she said, was the basis for the Danville Clinic. There are a handful of other similar clinics in the state, including the HOPE Spay Neuter Clinic in Versailles, the S.N.I.P. Clinic in Louisville and FURever Care in Liberty, some of which are only open certain days.

The Happy Paws Spay and Neuter Clinic is open on Thursdays, by appointment only, but is booked in advance — up to early June, Turbyfill said.

“We are overwhelmed,” she said.

They won’t be taking anymore appointments until the first week of May, Turbyfill said.

“We have several pit bulls (in the shelter) and it’s hard to find them homes,” Turbyfill said. “All of the ones we’ve had in the clinic have been very sweet, we’ve never had a problem with them.”

Costs begin around $35 for a cat to be neutered, and go up to $65 for a female dog over 50 pounds to be spayed. Animals that come in without proof of rabies shots will be given a shot for $5. That’s the only vaccination the clinic does, and is required by law, Turbyfill said.

Occasionally, she said, they will work with people to spay and neuter colonies of cats, too, so that the people can keep the cats on their property, and continue caring for them after the surgery.

Besides reducing the pet population, spaying or neutering animals also eliminates the risk of testicular or prostate cancer in males, and uterine, breast and ovarian cancer in females. It also “quells many risky and dangerous behaviors,” according to information from the Happy Paws Spay and Neuter Clinic.

The American Society for the Prevention of Cruelty to Animals estimates nearly 6.5 million animals enter shelters every year, and an estimated 1.5 million animals are euthanized, due to overpopulation. The number has decreased since 2011, as adoptions and strays being returned to their owners have increased.

The Happy Paws Spay and Neuter Clinic, 292 Stewarts Lane in Danville, accepts animals by appointment only.

The clinic is booked through early June and will begin accepting appointments again in May. Call (859) 691-1137 to book an appointment or visit http://www.homes4pets.org/clinic.htm to learn about prices.

There are other clinics in the area, including Critters Without Litters, 892 Moberly Rd in Harrodsburg. The clinic is also by appointment only at (859) 734-0199.