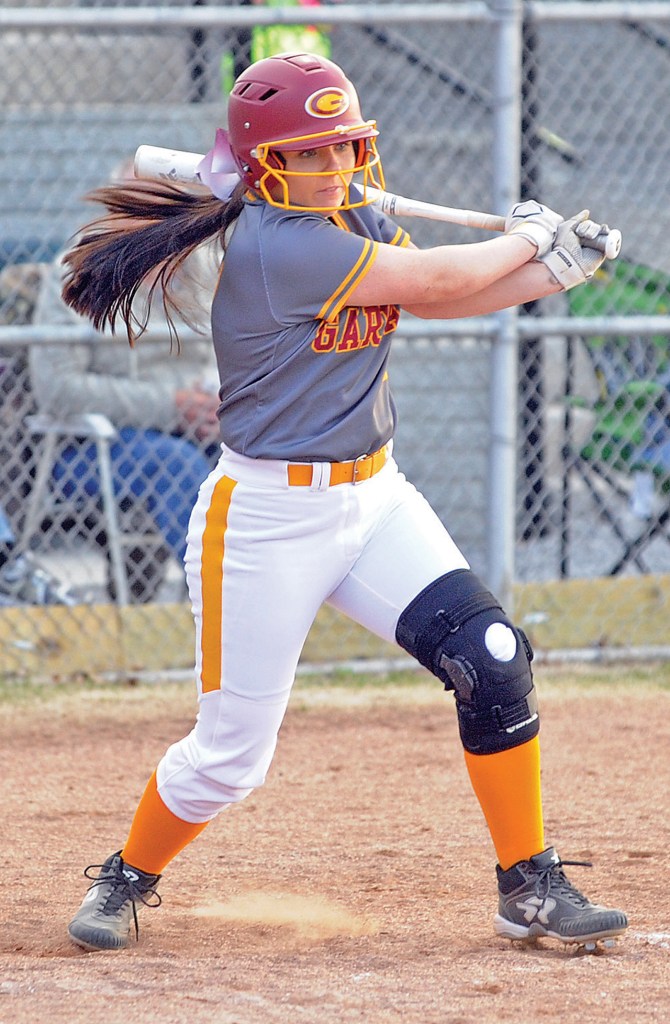 Matt Overing/matthew.overing@amnews.com Garrard County's Elle Montgomery missed her sophomore season after suffering a knee injury during basketball. This year, she's hitting .520 with seven doubles, 11 RBIs and 10 runs while going 5-2 with 33 strikeouts as a pitcher in her return to the diamond.

It was early December 2015 and Elle Montgomery was in her room, upset and crying.

Less than a week after injuring her left knee in Garrard County’s first girls basketball game of the season, the sophomore was understandably upset. Not only was basketball season gone, but so was softball season, and that’s the sport she was working to make her name in.

But then came a text message from her dad, Todd.

“Let it fuel your fire.”

In the weeks and months following her injury and surgery to repair a torn ACL, Montgomery used those words to push through grueling rehab sessions and stay focused as she missed her sophomore season.

And now, Montgomery is setting opponents aflame in her return to the diamond. She’s hitting .520 with seven doubles, 11 RBIs and 10 runs, and she’s 5-2 in the circle with a 2.71 ERA and 33 strikeouts.

“Whenever I got mad, I said, ‘Fuel your fire, come back better next year,’” she said. “My dad kept me going. He was my backbone through it all.”

Todd Montgomery didn’t miss a beat with reciting the date. He could forget birthdays or other important dates, but that’s one day it seems he won’t forget.

That’s the day Elle crumpled to the floor in a varsity basketball game.

“The first thing that went through my mind was the fear,” Elle said.

Both Elle and Todd mentioned her apologizing on the court as she sat there. Elle was apologizing for the potential she saw in the basketball and softball seasons and how she wouldn’t be able to contribute to either one.

“I felt I had let everyone down,” she said. “… I felt like I had let my team down and I had let myself down.”

Todd isn’t only her dad, he’s been her softball coach for as long as she can remember. Her freshman year in 2015 was also his first year as the Golden Lions varsity coach. So for him, seeing her go down was a double whammy. 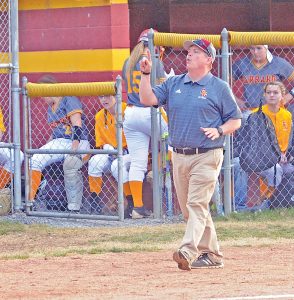 “We had debated was the risk worth the reward of her playing basketball,” he said. “Her sport is softball, but she has a lot of teammates playing basketball and she wants to do whatever she can to help Garrard County succeed.”

The Lions had a successful softball season, though, helping coach Montgomery with the frustration of not having Elle available to play.

“When you’re struggling, you think maybe you wouldn’t struggle as bad if Elle were there, but we had such a great season that it eased the pain of not seeing her out there play,” he said. “It made me … put more effort into the team to maybe forget the sadness of not seeing Elle out there.”

Not that Elle didn’t try to sneak her way back into the lineup.

“There were times she’d come to me and say, ‘Put me in there, I can do it. Let me go bat,’” coach Montgomery said. “It was almost the point where you had to hide her uniform and equipment because I was afraid she’d do something silly.”

The Lions were coming off a 24-9 softball season and a spot in the 12th Region tournament during her freshman season, and 2016 was looking to be an even better year. Elle was supposed to be in the mix … and then she wasn’t.

Even without Elle patrolling the outfield and providing another powerful bat, the Lions went 19-13 up against a brutal schedule. They advanced to the 12th Region championship game, where they lost to powerhouse East Jessamine.

While not being out on the field certainly wasn’t in Elle’s plans, she grew in other ways in the game.

“During games, I learned more about the game, sitting back, listening to his reasoning for things,” she said. “There were sometimes before, because he’s been my coach forever, that I’d be like, ‘Dad, why did you do that?’ It sounded so stupid to me. But sitting there, listening to him, because he talks to himself during games, I could hear it and I saw what he was doing. It makes you see the game from a whole new perspective.”

Not having one its best players available also helped the team grow as well.

“It helped us develop more kids because they had to go fill her spot,” coach Montgomery said.

Elle credits Dr. Jeremy Tarter, who performed her surgery, and a former travel ball teammate, Boyle County graduate Marlee Smith, for keeping her going throughout her struggle to return.

Smith had also found her way back from a knee injury to become an indispensable part of the Rebels basketball team, earning her a spot on Berry College’s roster.

“What first kept me going was God, knowing that this was his plan,” she said. “… (Tarter) is such a good man. He’s so calming. He restored that positivity and faith in myself, that confidence.

“As soon as that night, (Smith) hit me up with a text, and ever since then she’s been my confidant. Whenever I was upset, I’d call her. Even now, I’ll call her, text her. … She’s shown me that I’ll get through this. Look at what she did at Boyle, her stats over there are ridiculous. She put the confidence in me that, Hey, you can overcome this, it’s a bump in the road.”

Aside from not competing and helping her team, the biggest struggle Elle faced last year was not being able to showcase her talents for colleges. While no colleges have made contact with her yet, she’s confident they will.

But she feels she still has plenty to improve upon and show. Many athletes cite mental hurdles they have to clear upon returning from an injury like her’s, and Elle said they were in front of her prior to playing a couple travel ball games in September.

Even now, over a third of the way through the season, she’ll make a hard landing or twist the knee and take a sigh of relief.

“This weekend, I made a play and landed on it hard and I was like, ‘Ooooh,’” she said. “It’s not fear, it’s caution with it. If you play the game with fear, then you’ll injure it again. During games, it’s the last thing on my mind, but when something happens that I’m very leary about, I will let you know.”

A “BONUS” FOR THE TEAM

The Lions are off to a 10-4 start, their best opening to a season since going 12-2 to start the 2011 campaign. There are plenty of obstacles to overcome still this season, not the least of which is an April 12 game against rival Boyle County in Lancaster.

“As soon as I hit the field, I felt that I was at home,” Elle said. “I was ready to go. I was ready to knock the snot out of the ball. It was like letting a horse out of the gates on Derby Day.”

While Elle isn’t alone in excelling for the Lions this year — Kelsey Perkins is having an outstanding year in the circle, and numerous players, like Sam Adams, Olivia Saylor, Kelsi Moss and Katy Pozzuto, are leading at the plate — coach Montgomery said having Elle back is a “bonus” for the team.

But as good as her individual numbers are, she only feels as if she’s back to where she was a freshman. There’s still improvements to be made.

“I’m still on the rise,” she said. “I believe I can continue to get better. This isn’t my peak, I’m still climbing to get there. … There are something things where people might think, ‘Oh, she’s not as good,’ but that just fuels the fire, makes me want to come back even better.”

Track and field: Epitome of effort, loyalty and tradition