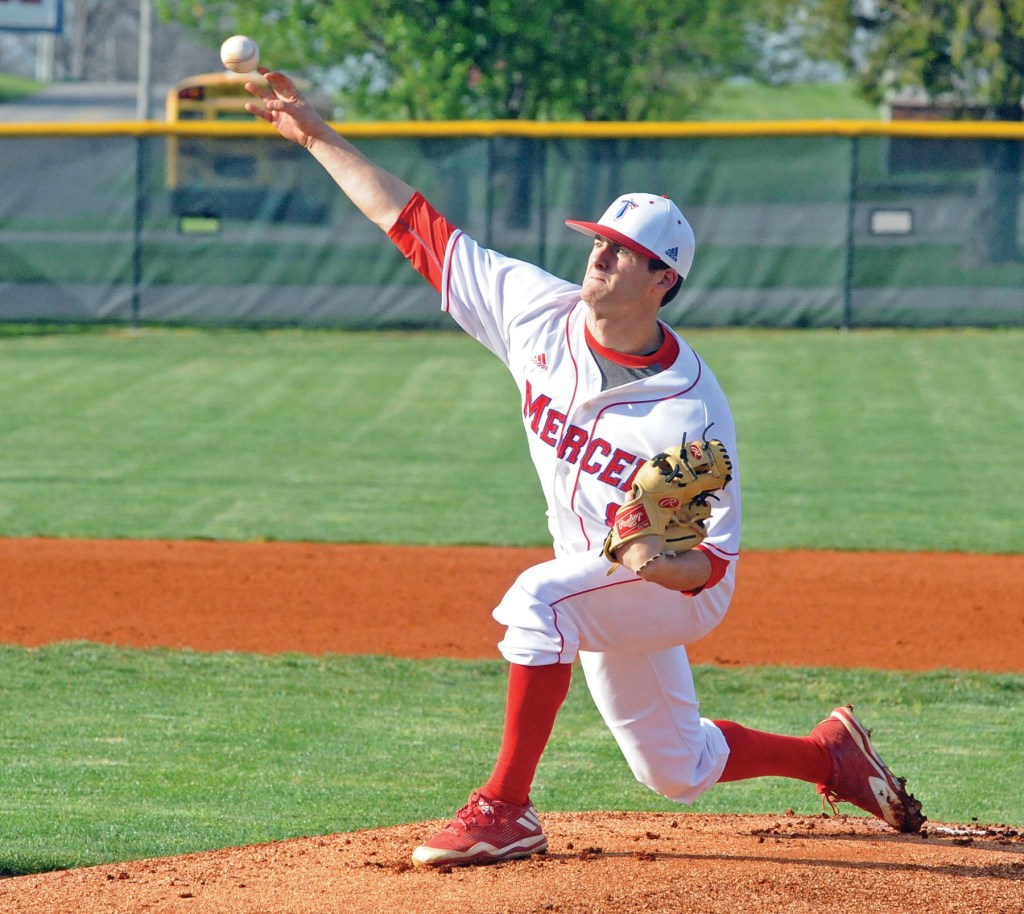 HARRODSBURG — With Tanner Robins back on the mound, Mercer County cruised to a 15-5 victory over Rockcastle County on Tuesday.

“It wasn’t bad for a first outing,” Shartzer said. “We wanted to make sure he controlled the zone and kept the ball down. He kind of got gassed, legs kind of gave out on him there in the last inning, but I thought he did well.”

Robins was also active at the plate — along with the rest of the Titans’ lineup. He finished a home run away from the cycle, going 3-for-5 with three runs, two RBI and a stolen base.

Only two of Mercer’s players didn’t record a hit, and every batter reached base at least once.

It was Mercer’s third win of the season, and each win has been the day of a doubleheader: Mercer beat Boyle County 11-1 and Rowan County 18-7 on March 25. The Titans played Danville after beating Rockcastle.

“We might play all of our games in 15 days if we keep hitting the ball like that,” Shartzer said. “We’ll be fine. I think the guys do very well responding to it, they can get up for both of these teams, both region opponents.”

Tuesday’s victory over Rockcastle was redemption for a 7-2 season-opening loss at Rock, Shartzer said.

“At Rock, some things happened that we couldn’t really control,” he said. “With Tanner going down in the infield, we were scrambling to get a new lineup, get guys mentally prepared to play. This is a game that was kind of circled on our calendar since then, I know Tanner really wanted this game and we gave it to him. He went out and got it for us.”

Shartzer said they wanted to keep Robins below 75 pitches Tuesday in his first game back. After three innings he was at 50, so they opted for Hunter Kelly to close the door. He finished the game with two innings pitched, giving up one two-run home run in two innings of work.

The Titans’ bats came up huge in the first two innings. Hunter Armstrong led off with a hit in the first inning, sparking a four-run first. The second inning started with back-to-back hits from Armstrong and Robins, followed by back-to-back RBIs from Mason Hazelwood and Noah Irvin. In the second inning alone, 13 batters went to the plate for Mercer, and the Titans scored seven runs with two outs.

Shartzer said he wants to keep the good times rolling at the plate, and to do that, his team needs to be patient.

“We’ve got to reduce the number of strikeouts,” he said. “Obviously our achilles heel has been hitting, we’ve just got to stay hot with the bats. For some reason, we get hot playing at home, but we don’t play district or region at home this year. We’ve got to find a way to manufacture runs on the road.”

Robins would hit his triple to start the third inning and Irvin brought him in, putting Mercer ahead 14-3 entering the final frame.

John Cornelius hit a two-run home run in the top of the fifth inning to extend the game, but a deep single from Hazelwood brought home Seth Tatum to end the game.

The long road back: Garrard’s Montgomery returns after knee…