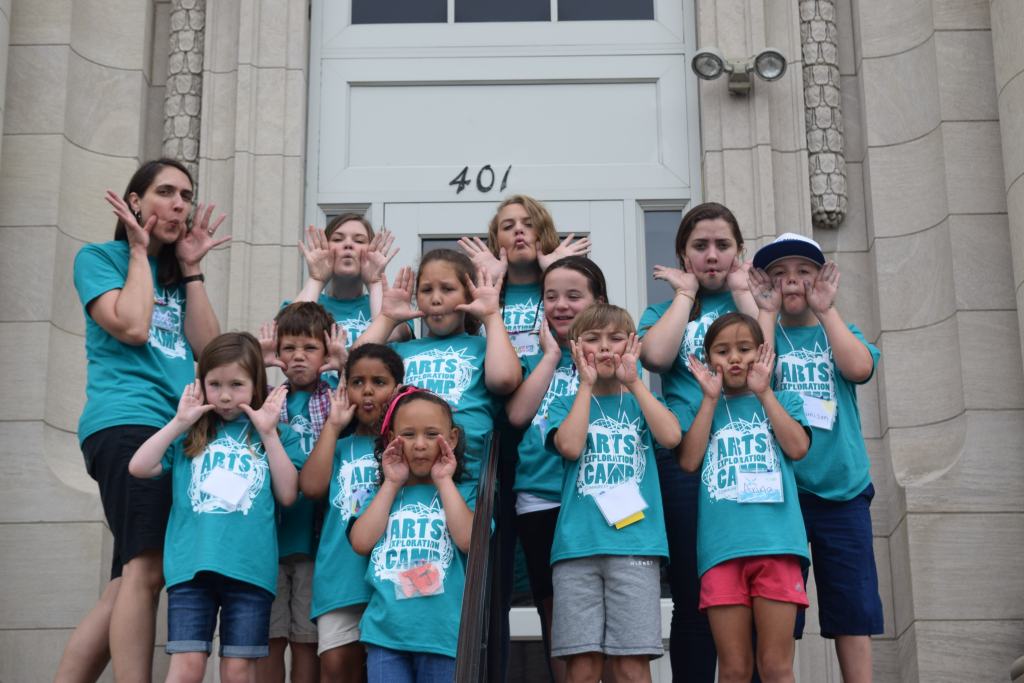 (Photos contributed) The Community Art Center’s education director, Maggie Shapiro Haskett, at far left, celebrates the end of a successful week of Under the Sea art camp with students in June 2016.

With the change in the seasons comes a change in the arts landscape of Danville as the Community Arts Center prepares for the departure of Executive Director Mary Beth Touchstone and Education Director Maggie Shapiro Haskett. Mary Beth has retired from her position after eight years and Haskett will conclude a two-year stint as education director at the end of June.

Touchstone will be remembered for her efforts to promote Danville’s growing reputation as an arts community. As chairperson of the Danville Cultural District, she was instrumental in securing Danville’s designation as a “Creative District” by the Kentucky Arts Council in 2012, through effective collaboration with the City of Danville and other cultural partners within the district. Danville is one of only seven Kentucky towns to achieve this designation that recognizes the city’s commitment to the arts.

It was also Touchstone who brought the “Starry Night Studio” phenomenon to Danville. Having seen similar social painting workshops in her hometown of Houston, Touchstone correctly guessed there might be an audience for the program in Danville. To date, enthusiastic community artists have created more than 4,000 paintings through the Starry Night Studio program, which empowers students of any ability level to create their own masterpiece by following step-by-step instructions from professional artists. 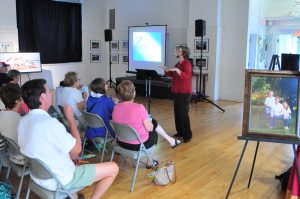 Former CAC Executive Director Mary Beth Touchstone shared her expertise in portrait photography during an August 2010 Lunch with the Arts program. Touchstone recently retired from her position at the Arts Center.

Touchstone says, “When I joined the Arts Center eight years ago, I was determined that the community have every possible opportunity to participate in arts activities. I set for myself the goal that the building should be in use 18 hours a day, seven days a week. We are so close to achieving that goal with classes seven days a week and studio memberships available 24 hours a day.”

When asked about the programming she has personally enjoyed the most, Touchstone points to the “Lunch with the Arts” lecture series. This popular monthly arts appreciation program is entirely run by dedicated community volunteer Joan Stansbury and has, over the past eight years, introduced the public to a dizzying array of artistic styles and mediums.

“I learned so much through this program,” says Touchstone. “I learned how Kathleen O’Brien relies heavily on meditation to provide inspiration for her work and I saw LaVon Williams chisel a piece of wood into a beautiful work of art right before my eyes. Hong Shao introduced me to the pipa, while a recent presentation by Centre professors Amy Frederick and Jay Bloom on the ‘Golden Age of Dutch Art’ taught me lessons that are applicable to the art market in 2017. I never would have had these opportunities anywhere else than at the Community Arts Center.”

While Touchstone plans to remain an active member of the Danville community in her retirement, Haskett is saying goodbye not only to the Arts Center but to Danville itself as she prepares to relocate to Lexington, Virginia. Haskett has accepted a position as director of Jewish Life at Washington and Lee University. She will launch the Arts Center’s 2017 Arts Exploration summer camps in June before starting her new position in July. Having previously lived in Lexington while her husband was a visiting professor at the college, Haskett says “We had gotten to know and love the Washington and Lee community during those years. So the opportunity to return to that place coupled with the tremendous job opportunity was just too much to refuse.”

Haskett  was the Community Arts Center’s first full-time education director and has overseen the development of several successful new initiatives during her tenure. Under her direction, the Arts Center expanded its popular summer art camps for children, added ceramics studio membership program, and developed a new field trip curriculum specially designed to meet the needs of students with disabilities.

“I have been so thrilled by the great response to our expanded programming,” says Haskett. “It’s been an honor to serve the Danville community.”

The Community Arts Center’s robust educational and artistic programming will continue unabated through the coming staff transitions. Stay tuned to the Arts Center website at www.communityartscenter.net/employment) for employment opportunities.