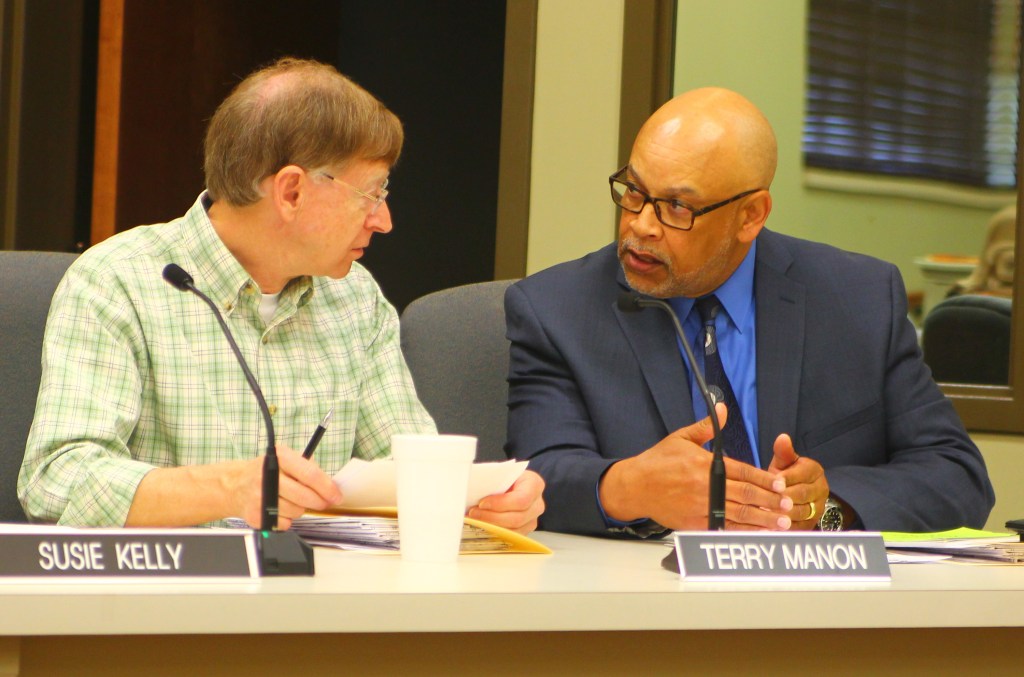 Ben Kleppinger/ben.kleppinger@amnews.com Clyde Mullins, right, the newest member of the Danville-Boyle County Planning and Zoning Commission, speaks with P&Z Commissioner Terry Manon prior to the beginning of Wednesday’s commission meeting.

Jeffrey Baird is the new vice chairman of the Danville-Boyle County Planning and Zoning Commission. He replaces Logan Germann, who is no longer on the commission.

P&Z commissioners voted unanimously Wednesday to make Baird vice chair and keep Chairman Jerry Leber in his role as head of the commission.

Germann’s term expired earlier this year and instead of reappointing him, Boyle County Fiscal Court chose defense consultant and Danville resident Clyde Mullins for the seat.

“I do not want anybody to take any implication that there’s been anything wrong with Logan Germann’s service,” Judge-Executive Harold McKinney said in March when Mullins was appointed. “It’s been long and good and honorable, and he’s been a wonderful member of the Planning and Zoning Commission.”

Leber said later in March that he would have liked to see Germann, who also served on P&Z’s personnel committee, reappointed.

“Logan’s term expired and unfortunately from my perspective did not get reappointed,” Leber said during a budget discussion with Danville city commissioners. “… Logan has been an invaluable member of that (Personnel) Committee.”

The Personnel Committee is currently searching for a new P&Z director to replace current Director Paula Bary, who is retiring at the end of June.

On Wednesday, Leber appointed Mullins, who was officially sworn in right before the meeting, to serve on the local Beautification Committee. Mullins will replace Bary on that committee because of Bary’s imminent retirement.

Other changes made in committee assignments for P&Z Commission members include:

• Terry Manon will replace William Baas as a representative of the commission on the regional planning council organized by the Blue Grass Area Development District.

• Mullins was appointed to the Flood Plan Appeals Committee — a committee Bary said P&Z is required to have, but which has never met. “Clyde will you accept that appointment, please?” Leber asked. “When does it meet?” Mullins asked jokingly. “It hasn’t,” Leber responded with a laugh.