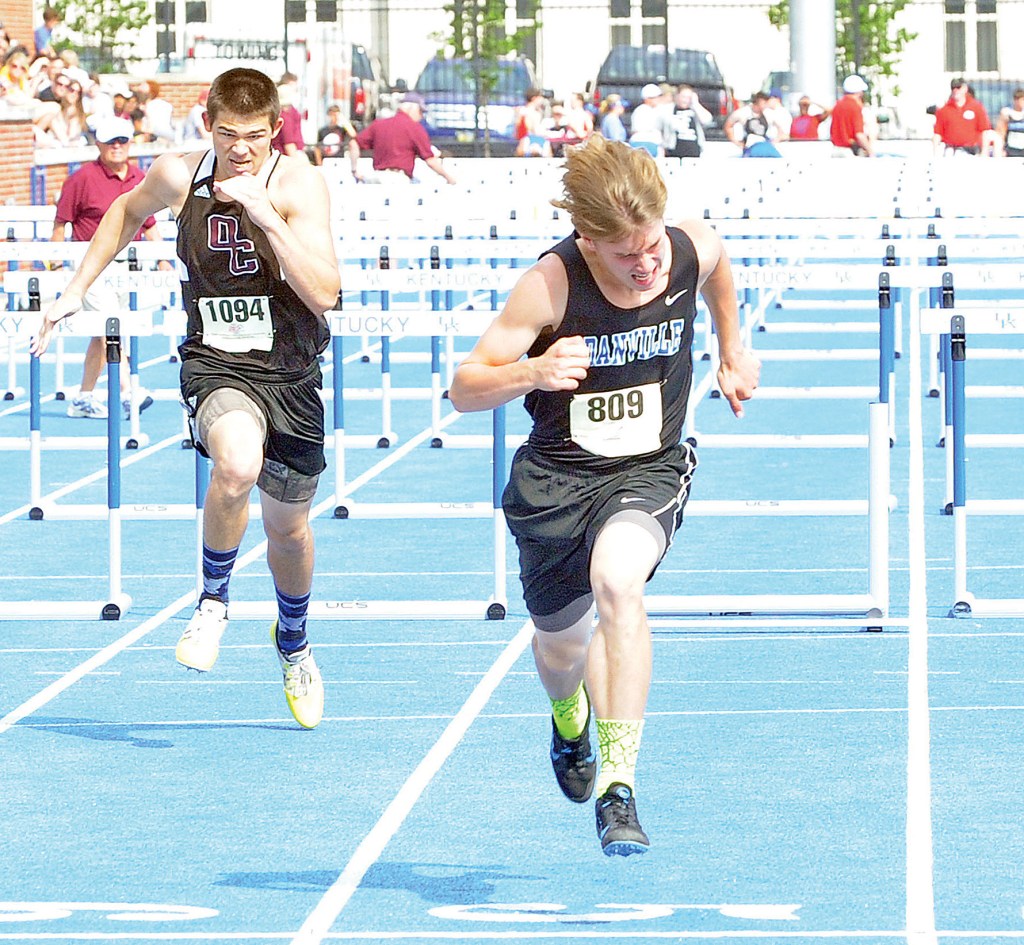 Danville boys soccer coach Brent Bowman equates it to a patch of grass. If you take a 10-by-10 foot square, you’re bound to find some clover, but if you increase that area to 10 acres, imagine how many more clovers are to be found.

Ads track and field coach Chris Verhoven understands that better than most anyone.

Within 13 miles of the Danville campus, there are two defending state champion Class 2A teams loaded and ready for more in Boyle County and Mercer County. Those three will regularly find themselves at the same meets throughout the season, and it can make for some frustrating times for the Class A Ads.

“We’ve been saying that for 18 years,” Verhoven said. “We’ve had teams that were in a better position within our own class than they were and we had the same approach because they’re a bigger school, they have more athletes. They still have good athletes during their ‘down years’ and our up years.

“Any good coach would work that to their advantage, saying, ‘If you can even keep up with (Boyle senior) Emmie (Harris) in the 300 hurdles, then you are probably the best hurdler in Class A, even if you’re just close, you don’t have to beat her.’ They’re always going to get us on depth.”

And even when it comes time for the postseason, the Ads will compete against the defending 1A boys state champion from Lexington Christian.

“We don’t want to sell ourselves short, we still have talent, but maybe not as much as we’ve had,” Verhoven said. “We still have enough talent that I think our girls can win (region) and our boys, we’re a solid second and can be competitive (with LCA).”

Verhoven said if they can do that, it’ll be one of the best coaching jobs he’s done in nearly two decades at Danville, simply because the Ads are down on numbers this year.

The Ads will use the meets against athletes from larger schools as motivation and proof of what they can do, but they’ll also use the times they post to compare with what other athletes in their same class are doing across the state. He said using MileSplit has been helpful in keeping kids focused on what their times mean within their class and not just what happened in a meet against larger schools.

“You’ve got to mentally prepare yourself to get better despite getting beat,” Verhoven said. “If you can do that, by the time it gets to that Class A meet, they’re so confident, they don’t need anything but the drive in themselves to be good.”

The one given the Ads have this year is freshman Gabe McKnight, who won state middle school individual titles in the hurdles last year and finished seventh in the 110-meter hurdles at the state high school meet.

With an athlete as obviously talented as McKnight, Verhoven said it’s about being “nitpicky” now, “from getting down lower on the hurdles to working on his balance when he’s coming off of a hurdle.”

One key they’re working on is that balance coming off of a hurdle. Instead of trying to regain balance on the three steps in between hurdles, Verhoven said McKnight is working on going forward. Even if that shaves only 1/10th of a second off each hurdle, over the course of 10 hurdles, that adds up to one second. And one second could mean a great deal come the end of May.

“One second when you’re that good is the difference between a state championship and finishing sixth,” Verhoven said.

It’s also about becoming stronger mentally. Verhoven mentioned the recent meet at Pulaski County, which was held in near freezing temperatures and a steady drizzle. While McKnight won the hurdles events, the times weren’t what he expected.

“When you do have success, you can’t down on yourself if you’re not perfect every time,” Verhoven said. “He still won that night, but his time sucked. You’ve got to temper that, hey, does that matter? That doesn’t matter.”

McKnight is a great example of keeping an athlete focused on the bigger picture when running against larger schools during regular season meets. It’s not always a negative, and often times a positive to run against some of the best the state has to offer.

For McKnight, that competition can only help. Verhoven brought up Mercer County hurdler Aaron Johnson as an example of the curve he wants to see McKnight take.

“Two years ago, Aaron was average at best,” Verhoven said. “The dude’s worked his butt off, he’s gotten to be physically a beast, like a lot of juniors and seniors do, and now he’s in a league of his own. He’s way ahead of Gabe, and I tell Gabe to not be discouraged by that, this is what’s going to happen to you if you work as hard as Aaron does.”

At this point in the early season, Verhoven is much like every other track coach and trying to figure out where to put his athletes to best use their abilities. McKnight is a definite in both hurdles events, but they’re also trying him in the triple jump and 200 dash, and Verhoven hopes to see McKnight on a relay team.

Joining McKnight on one of those relay teams might be junior Donlevy Harris, who’s been a thrower in the field events. He’s already set a new personal best in the discus this year, increasing his best throw by 10 feet, and now the Ads are going to send him out for the 4X100 relay as well.

Even though a strong showing in the relay will help the Ads track team, they’re also thinking ahead to fall as well.

“The biggest thing is, and it’s funny, our assistant coach Kelvin Turner, who is also an assistant on football, said, ‘Look, Zach Dampier isn’t coming back next year. Those guys come along once in forever, so we’re going to probably go back to running a lot more than we did with Zach, so I need a 2,000-yard runner, and guess who it is? So you’re going to learn how to run your (butt) off here in track,’” Verhoven said.

He also pointed out Jeremiah Wheat and Cole Verhoven as two others whose performances could help the Ads in the postseason. He’s counting on Wheat to come through in the sprints and Cole Verhoven to pick up hidden points in other events, such as the triple jump.

And if they can find enough of those points to pick up, they could claim their 13th boys region title in the last 18 years. Even if they don’t, though, Verhoven knows there aren’t too many schools in the region who will hold a pity party for him.

Because after a regular season of being the little guy at the meets, the Ads normally become the big bully during the region meet.

Overuse can spell disaster for athletes