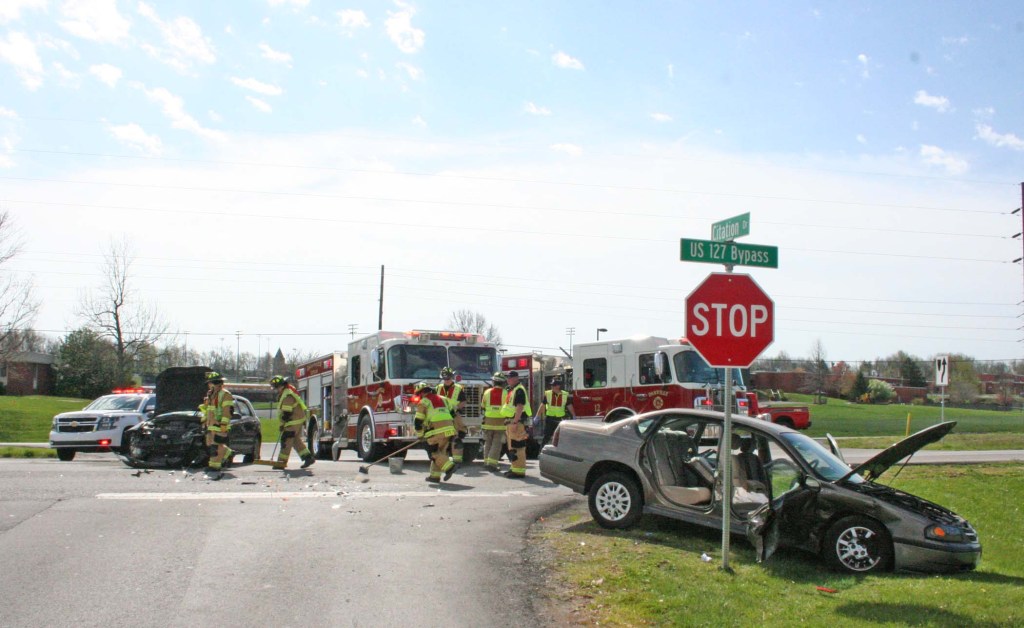 Kendra Peek/kendra.peek@amnews.com Danville Firefighters clean up after a two-vehicle wreck on U.S. 127 at the intersection with Citation Drive.

A two-vehicle wreck at Citation Drive shut down U.S. 127 southbound on the western side of Danville for about an hour and a half on Wednesday, and sent both drivers to the hospital.

According to the Danville Police Department, a 2008 Kia Spectra, driven by Robert Grizzell, 51, of Stanford, was heading south on the U.S. 127 bypass when a 2003 Chevrolet Impala, driven by Anna Reid, 85, of Hustonville, made a left-hand turn into his path. Reid was turning onto Citation Drive.

Detectives Lisa Dollins and Kevin Peel with the Danville Police Department reconstructed the accident scene, before cars were removed.

The Danville Fire Department assisted at the scene, along with the Boyle County Sheriff’s Office and Boyle County Emergency Management. Danville Police Officer Hobie Daugherty is the investigating officer.

When recreating the scene, according to Capt. Chris Matano of the Danville Police Department, officers sometimes use water to draw the skid marks out on the road. There are marks created by the vibrations when anti-lock brakes are enacted that are not easily visible, he said, which become more visible when water is applied. Beginning at the visible skid marks, firefighters sprayed a light layer of water on the road on Wednesday, which dried quickly, enabling detectives to better see these “hidden” marks. 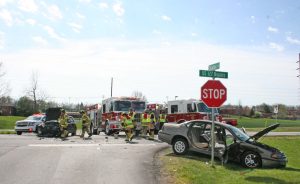 Kendra Peek/kendra.peek@amnews.com
Danville Firefighters clean up after a two-vehicle wreck on U.S. 127 at the intersection with Citation Drive.