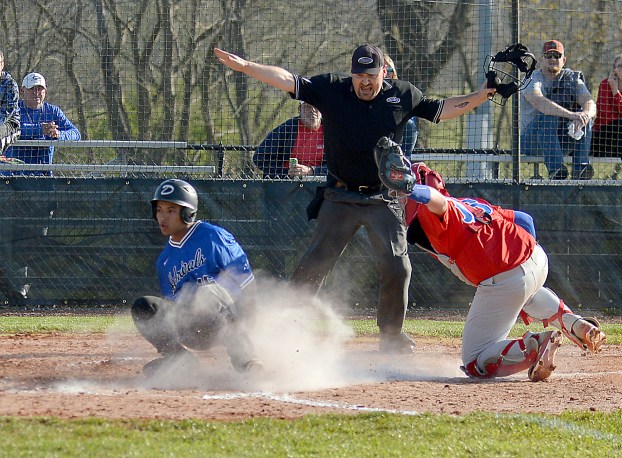 It was already a given that Dmauriae VanCleave is one of the best athletes in the area. He’s displayed that on the football field and track already, and now this year, he’s showcasing his talents on the base paths for the Danville baseball team.

VanCleave hasn’t played baseball since his fifth grade year, instead running track over the last five years. After qualifying for the state meet in the 100-yard dash and a member of the 4×100 relay team two years ago, he decided to switch it up during his junior year.

“I don’t know what really brought me out other than my friends talked me into it,” VanCleave said. “I played baseball in fifth grade but haven’t played it since because when got into middle school, I started to run track.

“I miss aspects of (track) it, but I don’t really miss the sport overall. I don’t miss running track, but I miss bonding with the older guys.”

VanCleave plays for the junior varsity team and runs the bases as a pinch runner for the varsity. Even with the steep learning curve from not playing for five years, VanCleave is already on a record-breaking pace with 18 stolen bases in nine games.

“He’s the fastest kid I’ve ever coached,” Ads coach Paul Morse said. “He came out February 15, and he’s got all the skills, he just hasn’t played since fifth grade.”

The Danville school record for stolen bases is 56 and the state record is 92 set in 1970. If VanCleave keeps up his current pace, he’ll eclipse 72 during the regular season.

“I think about it,” he said of the records. “Every accomplishment to me is something that pushes me to do better. State record, I want it more. School record, makes me push harder and harder. It makes me push for a certain amount of bases every game.”

On that first day in February, Morse said VanCleave’s ball exit speed off his bat was 86 miles per hour, trailing only four players on the team. The Major League average is 103 mph.

“We’re wanting him to be patient and stick it out and work because he’s got so many skills you can’t teach,” Morse said, adding that VanCleave is getting experience in the field and at the plate in JV games. “In the varsity games it’s about that, on the bases, and the JV games it’s about getting at bats.”

VanCleave admits it’s frustrating to go from being a star on the football field — he scored 20 touchdowns for the Ads last year as they advanced to the Class 2A state title game — to being a situational player for the varsity baseball team. But he understands there are lessons to learn and skills to improve.

“Coming from playing football, because I played football all my life, it comes easy to me,” he said. “And transition into baseball, not playing since fifth grade and having to catch up with everyone else, I’m behind and I’m not used to that, but I’m getting there.

“As an athlete, I’m always going to want more, but I think what I’m coming from, only playing in fifth grade, I think I’m coming along. I think I have to put in more work than everyone else because they’re ahead of me. But if I keep working, I’ll be fine.”

He said his coaches and teammates have taken extra time outside of practice and on the weekends to work with him, particularly on the base paths.

Before games, he’ll pay close attention to the opposing pitcher and catcher to pick up on cues he can use during the games.

“When the pitcher and catcher are warming up, I just watch,” VanCleave said. “When I get on base, after I’ve been watching it for so long, I know when the pitcher raises his leg, I know how long it takes in his windup so I know when I can take off.”

Up to now, it seemed as though VanCleave’s college future rested with football. But now, he can possibly start to look at baseball as a path as well. Morse said if VanCleave had never given up baseball, every Division I school would be looking at him and professional teams would be evaluating him as a possible draft pick.

“I think about it all the time,” he said. “Me and my dad sit down and talk about it, we talk about my options because football isn’t my only option. I love football, but I have to think about my future and what is best for me, and if that’s baseball, then I’m in with baseball.”

Ask any number of football players across central Kentucky, and they can testify to VanCleave’s speed and elusiveness. But he said the speed he’s used to become a first-team All-Area football player isn’t the same type of speed he needs on the diamond.

“It’s a different kind of speed because it’s not a straight up running, straight speed, it’s a technique on the bases,” he said. “I think I’m getting it.”

And as a growing number of baseball players across the area can speak to, he certainly seems to be getting it.